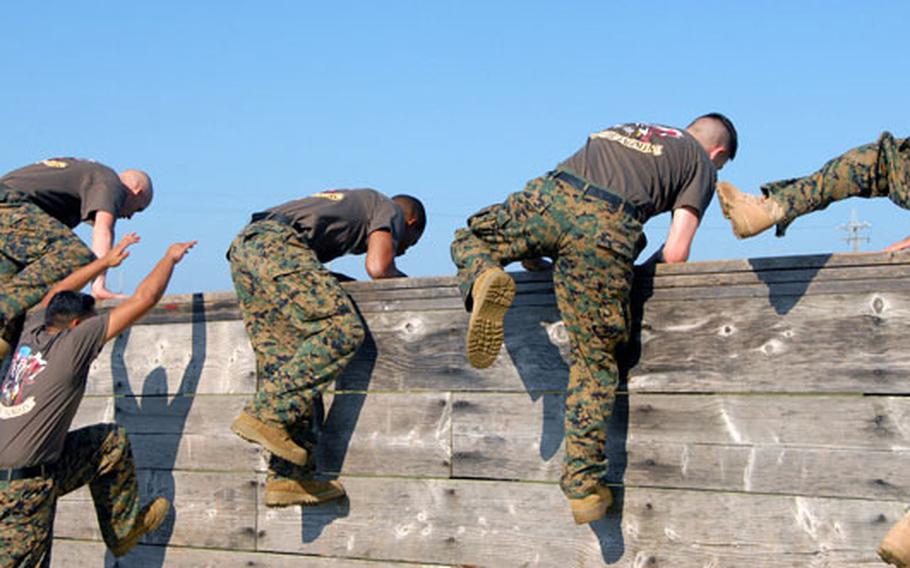 Members of team “Magic Stick” hurl themselves over the wall of the obstacle course Sunday. Most of the sailors of the team recently served together in Iraq with the Marine Corps 9th Engineer Support Battalion. (Megan McCloskey / S&S)

That kind of camaraderie and sense of team is the essence of Battle Skills, an annual competition designed to test the field and combat skills of Navy corpsmen assigned to Marine units.

Six teams, with names like &#8220;Those Guys&#8221; and &#8220;Silver Bullet,&#8221; are competing in the five-day event, which wraps up Thursday and consists of an obstacle course, a combined skills course, a zodiac boat race, a pistol course, a forced march, a land navigation course and a written exam.

Proficiency in those areas is imperative for all corpsmen whose &#8220;assignment is with the digital camis,&#8221; guest speaker Vice Adm. Donald Arthur said at the opening ceremony.

Sailors serving on the green side have to prove themselves to the Marines before they&#8217;re completely accepted as a part of the team, Otfinoski said.

Sailors attached to Marine units need to be able to &#8220;do what the Marines do, and their corpsman duties,&#8221; Chief Petty Officer Bill Nicely said.

The competition covers both. The combined skills course, for example, includes a section on patient assessment and treatment as well as M-16 and 9 mm pistol assembly and disassembly.

Launch the Battle Skills slideshow to see more photos from the first two days of competition at MCASS Futenma.