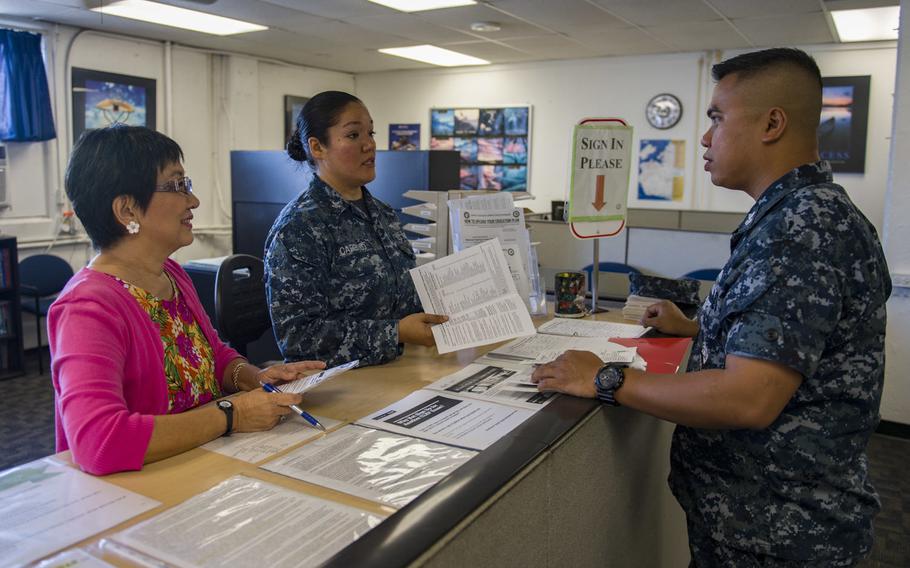 NAPLES, Italy — Lawrence Daley credits face-to-face college counseling for his decision to obtain a master’s degree while he was in the Air Force in the early 1990s.

Daley, who’s now a counselor at the Naples Navy college office, recalled his counselor’s strongly encouraging him to pursue an advanced degree, which he feels has given him an edge when applying for jobs.

“The human touch is important,” he said. “This is not just about school; it’s about life.”

Sailors enrolling in college courses will continue to enjoy the personal touch overseas but will find it absent when they transfer back to the States. The Navy on Oct. 1 closed its last four stateside college offices, which offered in-person help on college choice, course selection, education planning, tuition assistance, testing and other matters.

The overseas offices will remain open. Sailors in the U.S. will be directed to the Navy’s Virtual Education Center, where they’ll get assistance online and through a call center.

The Navy is the only military branch phasing out college offices. It shuttered 20 offices in 2009 and 16 offices last year. The remaining four, including at the Norfolk Naval Station, closed this week.

Closing the college offices will save about $2.3 million, the Navy says, and will serve younger sailors who prefer handling tasks with the computer and phone.

Daley said some older sailors who like to meet in person will have a harder time adjusting. He agrees that most young sailors feel at ease enrolling in classes and planning their careers without a face-to-face conversation.

Even so, as a counselor he prefers looking people in the eye because sometimes their facial expressions or body language convey they don’t understand something — visual cues that would be missed on the phone.

Schools such as the University of Oklahoma will continue to run their own on-base programs in the U.S. Directors at the Navy’s regional commands will work with the schools.

An on-base office, such as the one in Naples, acts as a hub for the colleges, guiding students to the schools that serve their academic goals and helping the programs to run smoothly, said Mitzi Williams, University of Maryland University College’s regional director for the Mediterranean.

“They very much guide our operations,” Williams said. “They coordinate all of this.”