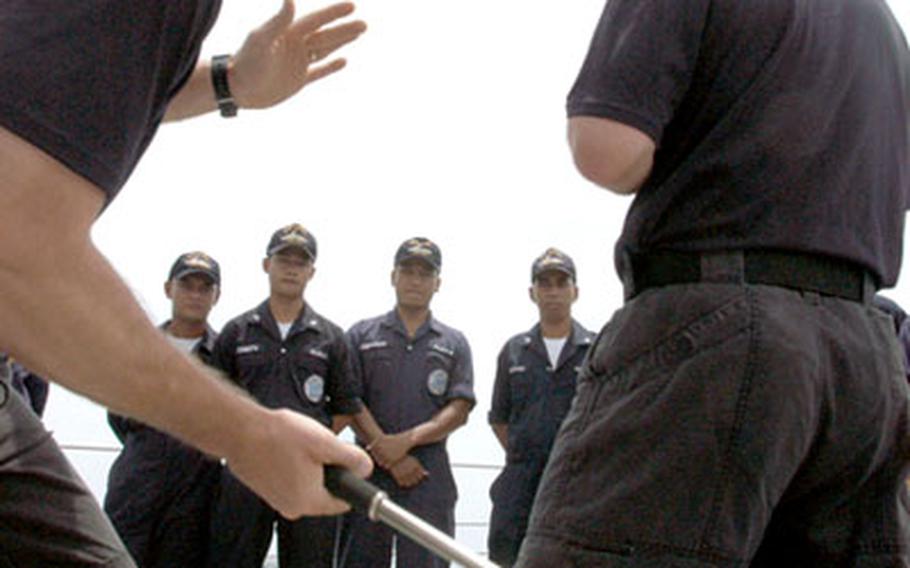 Members of the boarding team on the USS Rodney E. Davis demonstrate ways of using appropriate force Thursday when encountering an unruly person during a ship search. (Juliana Gittler / S&S)

Members of the boarding team on the USS Rodney E. Davis demonstrate ways of using appropriate force Thursday when encountering an unruly person during a ship search. (Juliana Gittler / S&S) 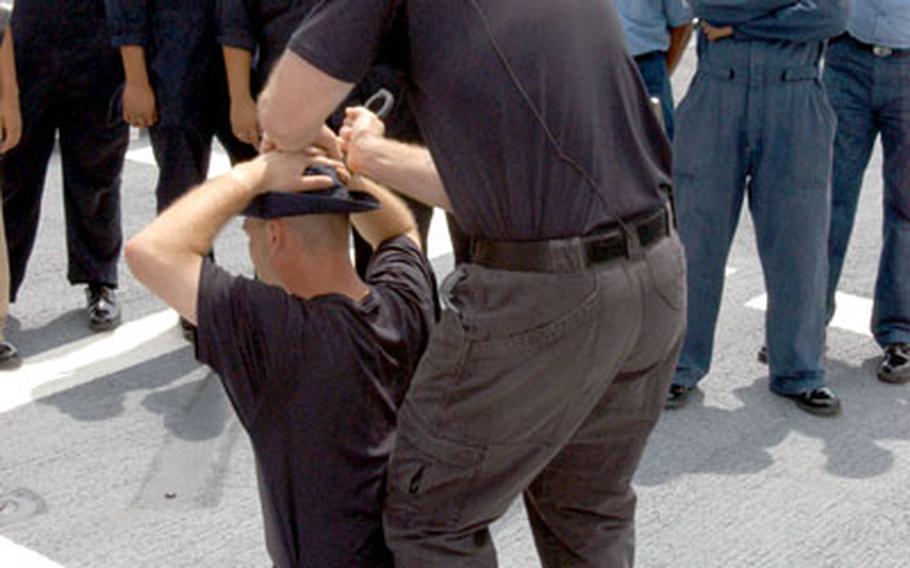 SUBIC BAY, Philippines &#8212; It could be as simple as seeing new bolts on a rusty old panel, or a wall that seems out of place, said Lt. j.g. Gordon Schmidt, boarding officer on the USS Rodney E. Davis.

Illegal goods or weapons can be hidden in myriad places on a ship, and it&#8217;s up to Navy and Coast Guard boarding teams to find them. But they must also look for more pressing dangers.

&#8220;There has always been a concern with piracy in certain areas, concerns with transportation of illicit drugs, potential transport of weapons of mass destruction,&#8221; said Coast Guard Capt. Gary M. Smialek, who leads the Coast Guard&#8217;s participation in the exercise Cooperation Afloat Readiness and Training.

However, with the rise of terrorism CARAT has evolved in kind.

&#8220;CARAT has changed its focus a little bit toward maritime security in the past year or two,&#8221; Smialek said. &#8220;The seas are wide open. There has not been a focus on maritime security; there has always been a focus in the air and at the borders. What the U.S. would like to do working with others countries is find those concerns at the source.&#8221;

At sea, they practice getting to and boarding a suspect ship. On land, they learn ways of conducting searches safely.

Much of the training looks at use of force and search techniques.

But searches must be careful. Weapons have been found bound in watertight bags dropped into fuel tanks or hidden in engine compartments, he said.

Being on a boarding team, a collateral duty for sailors, carries unusual stresses.

&#8220;You never know if someone&#8217;s going to start shooting at you,&#8221; said Fireman Brandon Dryden, who works with gas turbine engines &#8212; which helps him search and secure the engine rooms of suspect ships.

Host-nation sailors show up as untrained individuals and leave as a cohesive and prepared team, said Petty Officer 2nd Class Jereme Klopp, a sonar technician. &#8220;We&#8217;re just trying to give them the safest way to get home,&#8221; he said.

By working with other countries and sharing skills, the U.S. teams can help other nations continue securing the seas. They also learn to work together.