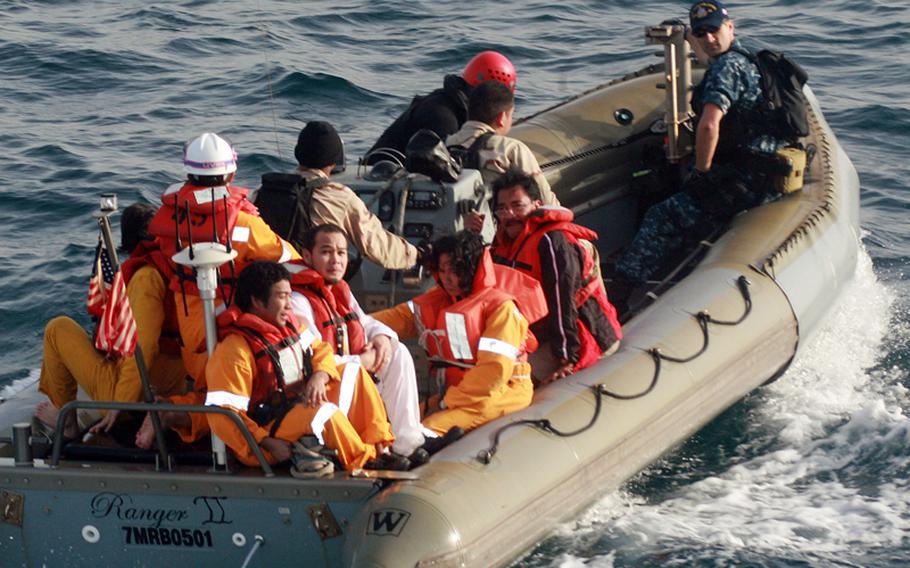 YOKOSUKA NAVAL BASE, Japan &mdash; The U.S. Navy and Coast Guard rescued 24 Filipino sailors from life rafts in the Persian Gulf on Thursday after an explosion disabled a tanker and killed one crewmember.

The crew spotted a life raft signaling and launched an inflatable boat to investigate, according to the release. It found one life raft loaded with 16 Filipino sailors, and another with eight sailors. The sailors were escorted aboard the John Paul Jones and did not need medical help.

Firefighting tugboats were sent to aid the Stolt Valor, according to the news release.

The Stolt Valor is a chemical tanker that was carrying about 13,000 metric tons of the gasoline additive methyl tertiary butyl ether, also known as MTBE.

At about 7:30 a.m., the sailors were transferred to the Coast Guard cutter Baranof, where they were taken to Manama, Bahrain.

The operation was the first high-profile rescue in the Persian Gulf since Navy vessels rescued groups of Iranian sailors in successive weeks in January.