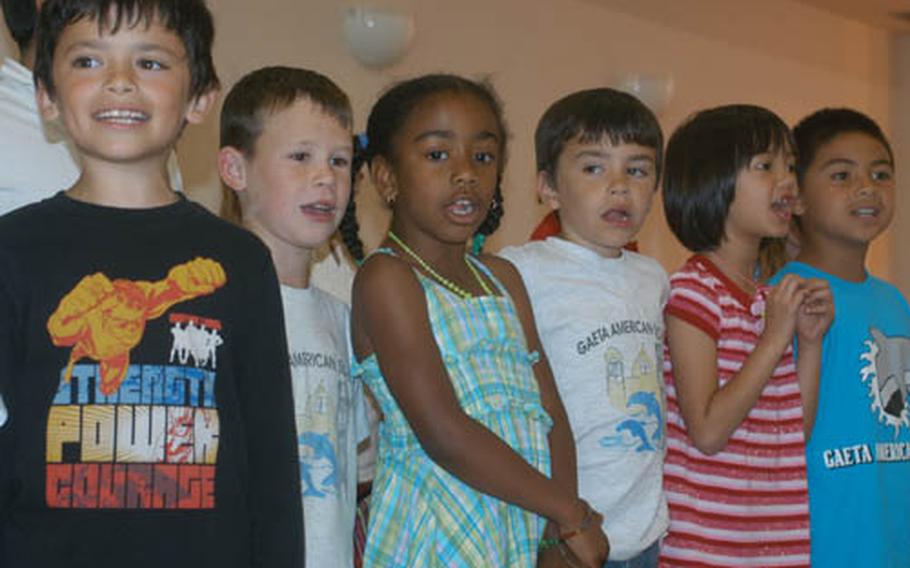 Students at Gaeta Elementary School perform for parents and faculty Friday as they celebrated the final day of the school year and marked the closing of the school for good. (Lisa M. Novak / S&S)

It was, literally, the last day of school for Gaeta, as the classroom doors shut for the last time.

The school closure was one of the final steps in downsizing the U.S. Navy&#8217;s presence in Gaeta. Some services moved from the hilltop base of Monte Orlando down to smaller, pier-side facilities to support the crew and staff of the 6th Fleet flagship, USS Mount Whitney. Other base facilities, like the school, have been eliminated completely.

Gaeta Elementary, opened in 1970, was originally named the Joshua Barney School. It was renamed in the mid-1980s.

It was slated to close last year, but was granted a one-year reprieve by Department of Defense Dependents Schools-Europe following a 2006 request from the Navy.

As the final day arrived, faculty, friends and parents of the remaining 18 students gathered to celebrate with music and an awards assembly. It was also a final chance to say goodbye.

"I&#8217;ll miss the base and my friends," said 9-year-old Victoria Moore, who just finished fourth grade. "It was a lot of fun here."

Friday&#8217;s events marked a special milestone for Mary Tatta, a teacher of 45 years. She has taught at the school since it opened.

"It was a wonderful time," said Tatta, who is set to retire. "It&#8217;s bittersweet. There were some rocky bumps along the way, but it was such a pleasure to have worked with the DODDS children. They&#8217;re the best."