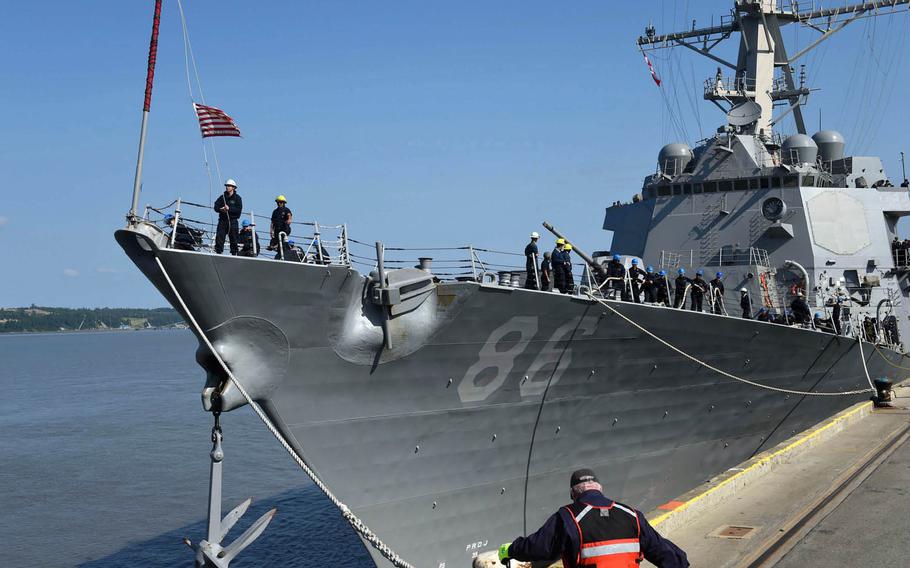 A crewmember of the USS Shoup raises the ship's first Navy jack as it prepares to moor at the Port of Anchorage, Alaska, June 24, 2015, as one of three Navy destroyers participating in Exercise Northern Edge out of the Gulf of Alaska. (Larry Foos/U.S. Navy)

The Navy announced Monday that it will move ahead with plans for an annual large-scale exercise in the Gulf of Alaska involving a carrier strike group.

The Navy’s decision, based on three possible scenarios in an environmental impact study, is a scaled-back version of its preferred choice that would have given the green light to two carrier group exercises annually.

The Navy already participates in the biennial Northern Edge joint-force drills in the Alaskan gulf, last held in 2015 and scheduled to begin again in May.

Under the new annual exercise, the Navy will use sonar for up to 21 consecutive days between April and October, in training that will include anti-submarine warfare drills.

The Navy’s study concluded that none of the training scenarios considered “results in significant impacts to the environment.”

The Navy will take measures to limit its impact, particularly for marine mammals, and will comply with both the Endangered Species Act and Marine Mammal Protection Act, according to a service statement.

Some in the Alaskan fishing industry and local tribal members have opposed the Navy’s continued use of the waters south of Anchorage.

In May 2015, the coastal town of Cordova, located near the site of the Exxon Valdez oil spill of 1989, passed a resolution opposing the Navy’s training exercises.

The city council contended that the Navy did not have enough scientific information to demonstrate that the training didn’t negatively affect salmon, whales and birds, among other wildlife.

The Navy disputed that in the study’s Record of Decision issued Monday.

While “knowledge of the ocean is limited,” the Navy said, all “indications from the best available science and from decades of joint training exercises in the [Gulf of Alaska] are that impact from the proposed continuation of Navy training … will result in no meaningful or lasting changes to any marine species, their habitat, or other resources in the area.”

Environmental groups have sued the Navy and the National Marine Fisheries Service numerous times in the past few years over the use of sonar during training.

The Navy said that while sonar and underwater explosives might result in injury or disturbance to certain marine mammals in the Gulf of Alaska, there would be no fatalities because of the Navy’s use of “mitigation measures such as monitoring and exclusion zones.”

Among those measures will be the establishment of a “North Pacific Right Whale Cautionary Area,” where neither explosives nor “mid-frequency” sonar mounted on surface ships will be used from June to September.

Due to concerns expressed by tribe members in the Kodiak area, the Navy said it will not use explosives in the Portlock Bank area during training events.