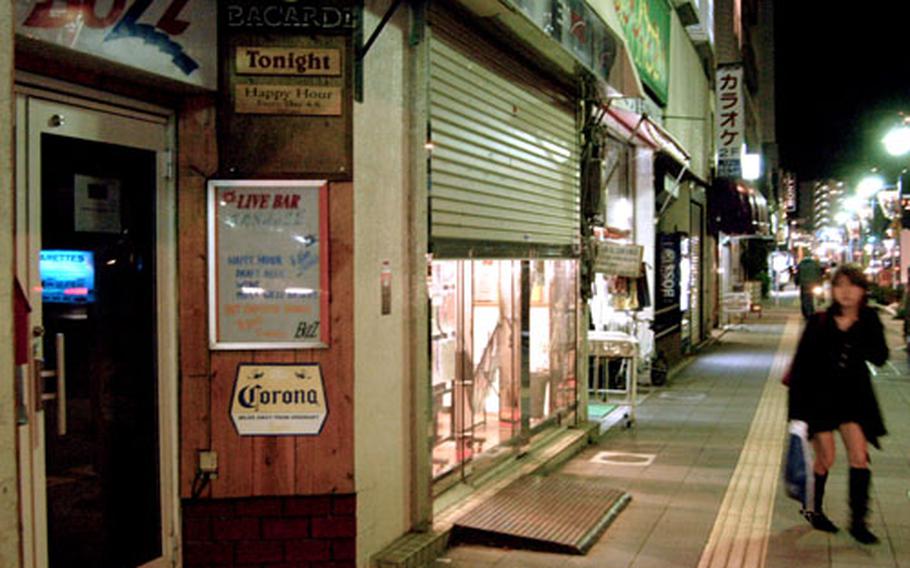 Live Buzz Bar, on Highway 16 across the street from Yokosuka Naval Base, Japan, was the site of an early November incident that resulted in the death Tuesday of a Japanese man. (Allison Batdorff / S&S)

YOKOSUKA NAVAL BASE, Japan &#8212; Japanese authorities are pressing charges against a high-ranking U.S. Navy civilian in the death of a 70-year-old Japanese man outside a Yokosuka bar.

The Yokohama District Public Prosecutor&#8217;s Office in Yokosuka announced Wednesday they indicted Robert Burns Nolan on the charge of &#8220;bodily injury resulting in death&#8221; after a Nov. 2 altercation outside Live Bar Buzz, located a few blocks from Yokosuka Naval Base.

Nolan, 54, is a GS-14 and works on the base as the Commander, Naval Forces Japan personnel management officer. He was also working at Live Bar Buzz at the time of the incident, said a Yokosuka police spokeswoman.

According to the Prosecutor&#8217;s Office statement, Nolan assaulted Katsumi Nakagawa, 70, outside the bar by &#8220;pushing the victim hard near his chest, causing him to fall and hit the back of his head on the sidewalk.&#8221;

Nakagawa died four days later at a Yokosuka hospital &#8220;from a brain contusion&#8221; and an &#8220;intracranial hemorrhage due to a contusion on the back of his head,&#8221; the statement said.

A Yokosuka police spokeswoman told Stars and Stripes after the incident that Nakagawa was drunk and causing a ruckus in the bar. Nolan was taken into Japanese police custody Nov. 3 where he was held without charges until Wednesday, in accordance with Japanese law.

The next step is for the Yokohama District Court in Yokosuka to decide on a trial date. A conviction of bodily injury resulting in death carries a three-year-minimum prison term with a maximum of 20 years.

Off-base work guidelines apply to SOFA personnelThe Nolan case begs the question &#8212; can an American living in Japan under the status of forces agreement work off base?

Yes, but the type of jobs SOFA personnel can take are restricted, and no matter what you do, you need permission from your chain of command, says Fredric R. Collins, director of Total Force Manpower and Personnel Commander Naval Region Far East.

SOFA sponsorship is granted to servicemembers as well as DOD civilian employees and contractors and their dependents, which can include spouses, children and parents.

The following rules governing off-base employment are noted in the policy COMNAVFORJAPANINST 5300.2K.

Under it, SOFA people CAN:

&#182; Teach English as a foreign language without command permission.&#182; Apply for permission from the chain of command to work off base as long as it doesn&#8217;t interfere with the performance of their official duties.

SOFA people CANNOT engage in commercial activity or private employment if it is:

&#182; Sell real estate, stocks, bonds, insurance, securities or mutual fund shares unless they are licensed by an appropriate authority of a U.S. state or territory. They also must comply with applicable laws of Japan.&#182; Appear in television or radio programs, commercials, stage plays or motion pictures; make recordings; or engage in other public entertainment without specific prior approval.&#182; Wear military uniforms nor make reference to their service affiliation, rank and organization in any manner whatsoever if they are serving in the military.

&#8220;Commercial activity or private employment includes but is not limited to:

Collins said the directive was written to &#8220;narrow the kind of employment and at the same time keep a record of what our people were involved in. The specific restrictions had to do with what kinds of employment which would be an embarrassment to the U.S. and Japan &#8230; It has been refined through the years as different instances and situations took place.&#8221;

&#8220;Administrative and judicial measures as necessary, according to the USFJ instruction,&#8221; Collins said. &#8220;Hypothetically speaking, owning a bar is not a violation of Japanese law, nor is it a violation of federal law, but it IS a violation of U.S. Forces directives, to which the civilian may face appropriate administrative or judicial punishment.&#8221;

How do civilians get prosecuted in Japan?When civilians differ in the eyes of the law:

If a civilian sponsored under the status of forces agreement gets in criminal trouble in Japan, is the legal process that civilian faces any different from that faced by a U.S. servicemember?

BACKGROUND: Any time someone with SOFA status violates Japanese law on or off base, primary jurisdiction goes to the Japanese police &#8212; unless the offense is solely against the property or security of the United States, against a person or property of SOFA personnel or the offense arises while the person with SOFA status is on official duty.

When the Japanese prosecute:

The Japanese treat SOFA-sponsored military and civilian personnel the same through the Japanese criminal process.

When crimes are committed off base and suspects are in Japanese custody, military legal representatives visit them and advise them of their SOFA rights. These may include providing an observer and interpreter at the trial.

Under Japanese law, suspects can be held up to 23 days before charges are brought against them.

If indicted, the civilian suspect goes through the trial with the SOFA protections, just as a servicemember would. Commander, Naval Forces Japan regulations also provide the accused a Japanese defense attorney at government expense.

When the military prosecutes:

Civilians rarely are put in the brig, Le Moyne said. Nor can they normally be prosecuted under the UCMJ. Through administrative procedures, the military can fire civilians for crimes committed in Japan or ban them from the bases, but it usually cannot court-martial them.

However, to ensure that civilians are held accountable for their crimes, the Military Extraterritorial Jurisdiction Act (MEJA) was enacted in 2000. The act applies to civilians accompanying U.S. forces overseas. It lets the military ask a federal magistrate to look into cases that would carry a prison term of one year or more.

&#8220;Prior to MEJA, it was difficult if not impossible to have criminal culpability in such a case,&#8221; Le Moyne said. &#8220;MEJA has opened up the federal criminal justice system to exercise jurisdiction in these cases.&#8221;

Here&#8217;s how it works: The military would engage a specific U.S. attorney&#8217;s office in accord with regulations in place under MEJA. That Justice Department office would make decisions about whether to seek an indictment and the process would be largely similar to that which applies to other criminal defendants.