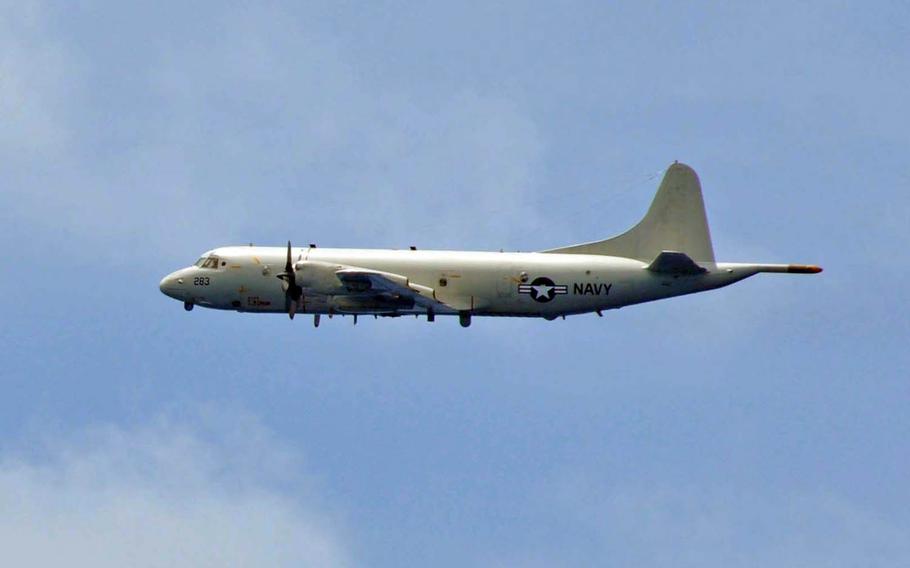 A Navy P3-C Orion and a Chinese early warning aircraft flew within 1,000 feet of each other near contested territory in the South China Sea, Wednesday, Feb. 8, 2017. (Corey Barker/U.S. Navy photo)

A Navy surveillance plane and a Chinese early warning aircraft flew within 1,000 feet of each other near contested territory in the South China Sea, in what service officials are describing as an unsafe encounter.

The Navy P-3C was flying over international airspace Wednesday near Scarborough Shoal – a territory claimed by the Philippines but controlled by China – according to a Pentagon official who spoke with Reuters.

“The Department of Defense and U.S. Pacific Command are always concerned about unsafe interactions with Chinese military forces,” a PACOM statement said. “We will address the issue in appropriate diplomatic and military channels."

China took control of Scarborough Shoal, about 130 miles from the Philippine main islands, after a sea showdown in 2012.

It has since prevented Philippine fishermen from accessing the area, which the Permanent Court of Arbitration in The Hague found unlawful in July. China has ignored the court’s ruling.

Meanwhile, Chinese fishing vessels have harvested coral and other marine life from waters entitled to Philippine vessels under international law.

Philippine President Rodrigo Duterte has sidestepped the issue since his election last year, in a bid to establish closer relations with Beijing.

However, the United States remains concerned that China may construct an artificial island atop the shoals, as it has done throughout the South China Sea.

China has constructed multiple airfields atop its artificial islands and added radar equipment, harbors and self-propelled artillery in some cases, according to Pentagon reports and satellite imagery.

Washington has accused Beijing of impeding the freedom-of-navigation rights of commercial and military craft in the sea’s international waters.

China maintains an ambiguous claim to about 90 percent of the South China Sea, though the map line used to demarcate its claim was ruled invalid by The Hague arbitral court in July.

More than $5 trillion in seaborne trade passes though the sea annually, including more than $1.2 trillion in U.S. trade, according to U.S. government figures.slavin.erik@stripes.com Twitter: @eslavin_stripes