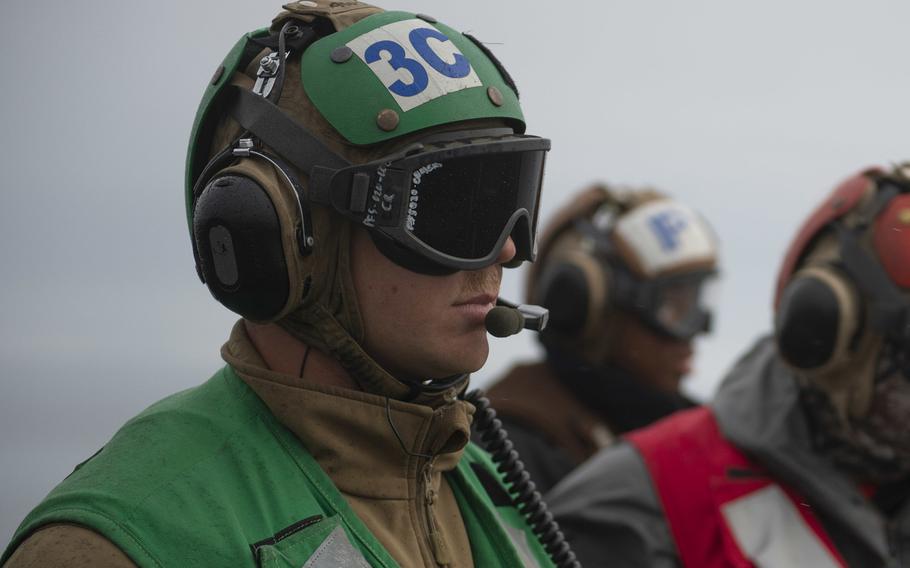 A Navy chief who died after a medical emergency aboard the USS Theodore Roosevelt was a father of three who was remembered for his humor and love of singing.

The Navy identified the sailor who died Thursday as Chief Petty Officer Justin Calderone, a member of Strike Fighter Squadron 146, or VFA-146. The nature of the medical emergency he suffered was not disclosed in a Navy statement.

Calderone received immediate medical care aboard the ship before being transferred by helicopter to a military medical facility ashore, where he was declared dead in the early morning, said the statement issued by the San Diego-based U.S. 3rd Fleet.

“It is a tragedy to lose a shipmate,” VFA-146 commanding officer Cmdr. Kevin McNatt said in the statement released Friday. “Our thoughts and prayers are with the family and shipmates of Chief Calderone.”

An Ohio native, Calderone enlisted in the Navy in 2003 and was a five-time recipient of the Navy and Marine Corps Achievement Medal, the statement said. The aviation electronics technician had also earned the Global War on Terrorism expeditionary and service medals, it said

He is survived by his wife of 18 years, Jennifer, and children Nathan, 17, Kailey, 14, and Bryan, 8, says a GoFundMe campaign to raise money for the family.

Known by the nickname “J-LO,” Calderone loved to sing, and those who knew him could probably still hear his rendition of Bryan Adams’ “Summer of ’69,” the page says.

“His family in Ohio, classmates, friends, and fellow sailors seem to find comfort in remembering his infectious laugh, continuous jokes, and most important his endless love for all,” it says.

On Facebook, his aunt asked for prayers for his wife and children, as well as his mother, brother and sister.

“He was so sweet and funny, this world lost an amazing man,” Dianna Blair Calderone said.

The Theodore Roosevelt’s deployment garnered widespread attention earlier this year when the carrier was sidelined in Guam after an outbreak of the coronavirus on board infected more than 1,100 sailors. Chief Petty Officer Charles Thacker, 41, a crewmember who died in April, was the first U.S. military fatality from the virus.

Nearly 2,000 sailors remained in quarantine on Guam when the ship returned to sea in May after more than two months in port. It was on its way back to its homeport in San Diego when the medical emergency occurred last week.

All personnel aboard the ship have been tested several times for the coronavirus and Calderone consistently tested negative, the Navy statement said.