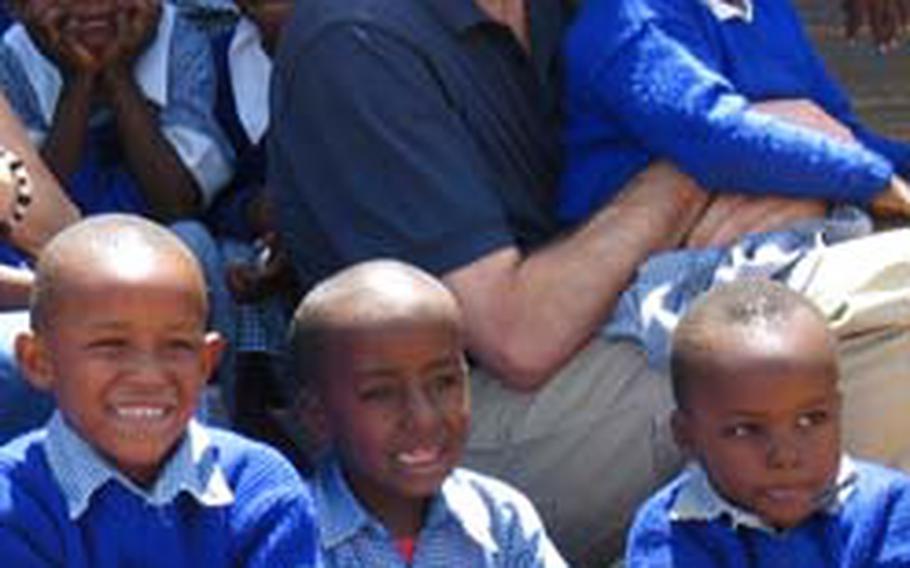 Nothing Navy Lt. David Masterson heard beforehand could do justice to the squalor that awaited him upon his arrival in Kenya.

Masterson, Camp Fuji&#8217;s command chaplain, spent all of January in the Dandora district of Nairobi, home to about one-third of the capital city&#8217;s more than 3 million people. He was there as a volunteer with Kinyaho-Dandora School, founded in 1987 by Kenya Children&#8217;s Fund, an American group.

What he saw outside the school gates were people living in slum apartments or shacks made of sticks and mud, many with no electricity or running water. Some homes have as many as 10 people living in a single room. AIDS and crime are rampant.

A river filled with garbage and waste runs through the area and is the community&#8217;s lone option for cooking, bathing or cleaning. People frequently forage through a nearby garbage dump, searching for food and anything else of use.

Masterson said he was awestruck by the scene.

&#8220;It is one thing to read about these conditions in the print media and quite another thing to experience the sights and smells of raw destitution firsthand,&#8221; he said. &#8220;My eyes were opened and my heart deeply touched.&#8221;

The Kinyaho-Dandora School enrolls nearly 800 children from kindergarten through 12th grade. Besides education, kids at the school receive two meals a day and medical care.

Masterson worked with a team of Kenyan psychologists whose mission was to provide counseling to children suffering from post-traumatic stress disorder due to widespread violence that occurred in the aftermath of the 2007 Kenya elections.

Some of the children had family members who were raped, beaten or burned, the chaplain said.

Masterson was one of nearly 20 specialists to use music and basic fellowship to help the kids share their stories and begin healing.

He said it was imperative to put aside the environment they were in if he expected to do any good.

&#8220;We would build relationships with children one on one, look into their faces and see their desire to grow and learn.&#8221;

Masterson described a bitter feeling of seeing children pressed against the gate that surrounded the school grounds &#8212; wishing they could attend. He said students couldn&#8217;t be more grateful about where they were.

Masterson also visited a camp and assisted families displaced by the post-election violence, when hundreds of thousands fled their homes.

He called his experience in Africa &#8220;life changing&#8221; and said he would encourage any servicemember to take advantage of similar opportunities.