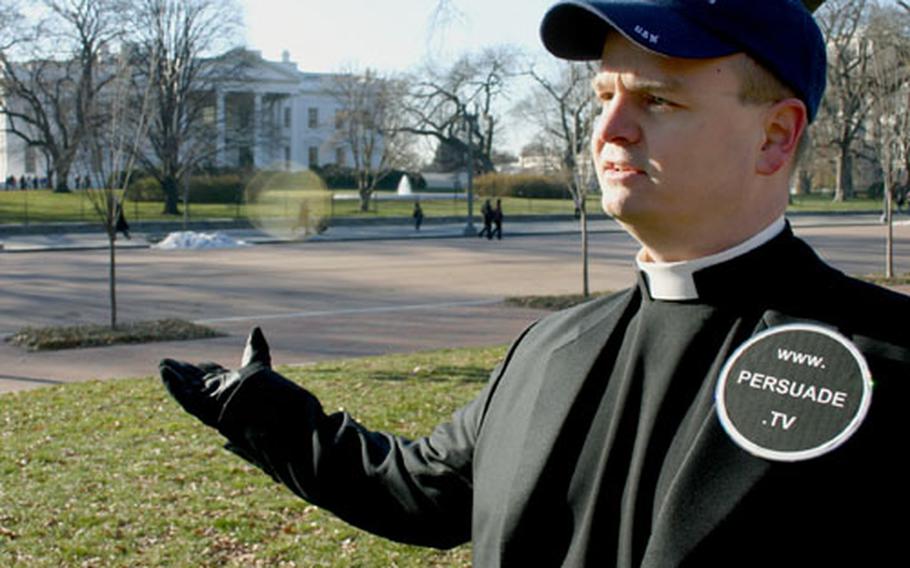 WASHINGTON &#8212; A Navy chaplain who says his Christian prayers are being censored by senior officers began a hunger strike outside the White House on Tuesday, petitioning the president to &#8220;let me pray.&#8221;

Lt. Gordon Klingenschmitt said he will eat nothing, drink only water, and hold nightly prayer vigils outside the White House until he gets a response.

Klingenschmitt said he fell out of favor with Navy officials for refusing to drop &#8220;Jesus&#8221; and other Christian-specific language from his public comments.

He believes his superiors are working toward discharging him from the service and the chaplain&#8217;s corps, and has filed a lawsuit against the Navy to keep his post. His contract runs out Dec. 31, and he said officials will not provide the necessary paperwork for him to continue in the chaplain&#8217;s role.

Navy spokesman Lt. William Marks said Klingenschmitt is still an active-duty sailor in good standing, has no disciplinary action pending, and has not received any punishment for language used in public forums. He would not comment on the paperwork accusation.

Marks also said that rules governing Navy chaplains do not limit what they can say during religious ceremonies but do specify that chaplains should &#8220;focus on practices the faiths have in common&#8221; when speaking at secular and public events.

The rules are explained to all chaplains during their training, Marks said, and are the same for all faiths.

Earlier this month, a group of 71 Congressmen sent a letter to President Bush asking him to protect &#8220;the constitutional right of military chaplains to pray according to their faith&#8221; through an executive order, citing concerns about limits on the language chaplains can use in public forums.

The American Center for Law and Justice has also started a petition drive seeking the same presidential action.

Klingenschmitt said since he announced his hunger strike on Tuesday, he has received support from more than a dozen congressmen for his efforts.

Klingenschmitt served for 11 years in the Air Force, not as a chaplain, before accepting a demotion to become a Navy chaplain three years ago, and has had numerous skirmishes with senior sailors in the past.

He said on one occasion, while serving on the USS Anzio stationed in the Persian Gulf in 2003, a commanding officer turned down his request to allow chaplains of all faiths to conduct nightly prayers in their own words before the sailors sat down to dinner.

In another, commanding officers would not supply kosher food to Jewish sailors, and he was counseled for &#8220;causing a stir&#8221; when he fought for the sailor, Klingenschmitt said.