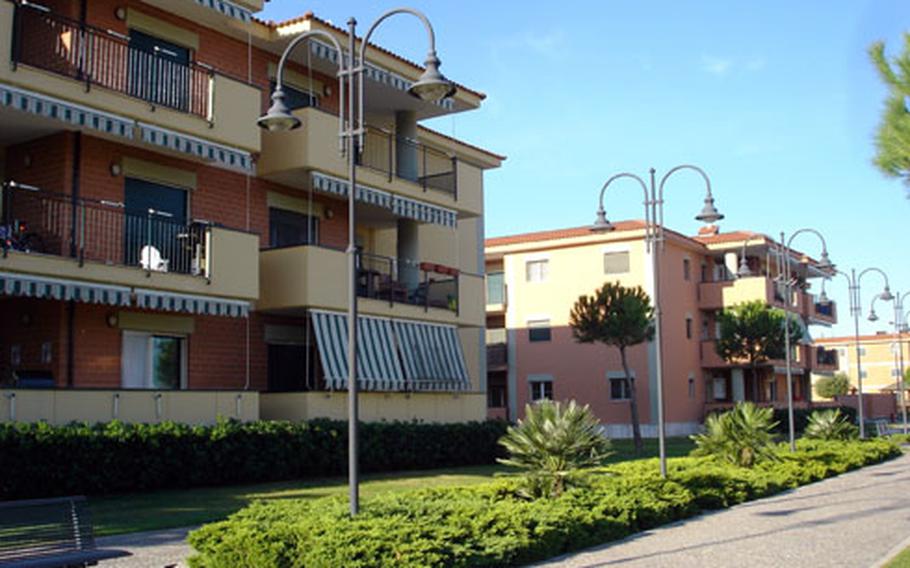 Support site residents in Gricignano will soon have more neighbors, as the Navy recently began requiring all incoming servicemembers be assigned to available government housing. Previously, servicemembers could choose to live off base, regardless of on-base occupancy rates. (Lisa M Novak/S&S)

NAPLES, Italy &#8212; All military personnel moving to the Naples area now will be required to live in government quarters if it is available, the Navy announced last week, reversing a long-standing policy.

Until now, any servicemember ranked E-5 or above was allowed to live off base, or "on the economy," so that troops and their families could experience living in a foreign country, officials said in November.

Base officials did not answer repeated queries about why the change was made, however occupancy rates on the support site in Gricignano &#8212; which includes schools, commissary, exchange and hospital &#8212; have consistently remained low over the past several years.

In general, the Navy attempts to maintain an occupancy rate of 95 percent in government housing before allowing servicemembers to rent off base, but the Navy&#8217;s housing policy gives base commanding officers discretion to deviate from that rate.

The contract for leasing the support site, which is held by local landlord Mirabella, requires the Navy to pay rent on all base apartments, vacant or occupied. Last year, the Navy paid $3.7 million on empty units with "approximately 237 vacant units at any given time," according to housing officials. There are nearly 1,000 housing units, mostly apartments, on the support site.

Asked last week, base officials did not provide information on current occupancy rates for the support site.

The base also maintains two off-base housing communities, called parcos, for residents who want to live in government housing but who own dogs, which are not allowed in support site housing. Those units are usually full and have lengthy waiting lists.

In 2005, the Navy offered to pay moving costs if servicemembers wanted to relocate from the economy to base housing.

And in November, the Navy began allowing single civilians to move into the two-bedroom units, which consistently had the lowest occupancy rates. As of September, only 53 percent of those units had tenants. Many Naples residents consider those apartments too small to fit their household goods.