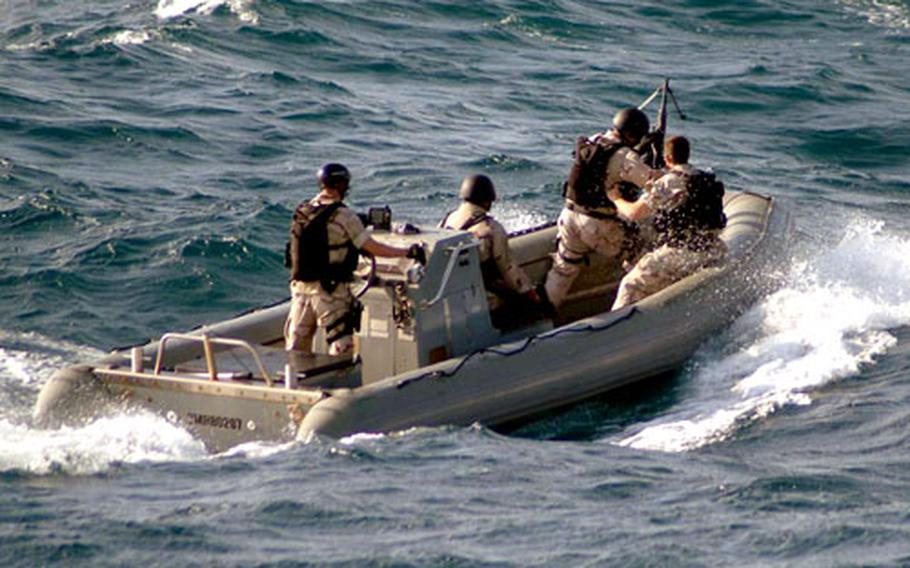 A boarding team from the USS Winston S. Churchill approaches a suspected pirate vessel to conduct a boarding and inspection in the Indian Ocean on Saturday. (Kenneth Anderson / U.S. Navy)

A boarding team from the USS Winston S. Churchill approaches a suspected pirate vessel to conduct a boarding and inspection in the Indian Ocean on Saturday. (Kenneth Anderson / U.S. Navy) The Navy captured 26 people on a suspected pirate vessel Saturday off the Somali coast after a U.S. ship responded to a report of attempted piracy, officials said.

It is unknown whether the suspected pirates were involved in an attack on a cruise liner off the Somali coast in 2005, said Navy spokeswoman Lt. Leslie Hull-Ryde.

The Navy received a report that pirates fired on a ship on Friday about 200 miles off the Somali coast, Hull-Ryde said in an e-mailed response to questions.

The dhow&#8217;s crew and passengers were being questioned Sunday aboard the Churchill to determine which were pirates and which were legitimate crew members, Hull-Ryde said.

Sailors aboard the dhow told Navy investigators that pirates hijacked the vessel six days ago near Mogadishu and thereafter used it to stage pirate attacks on merchant ships.

Pirates attacked more than 20 ships between March and November 2005 off the Somali coast, including one cruise liner, the Seabourn Spirit, which outran its attackers after being hit by a rocket-propelled grenade.