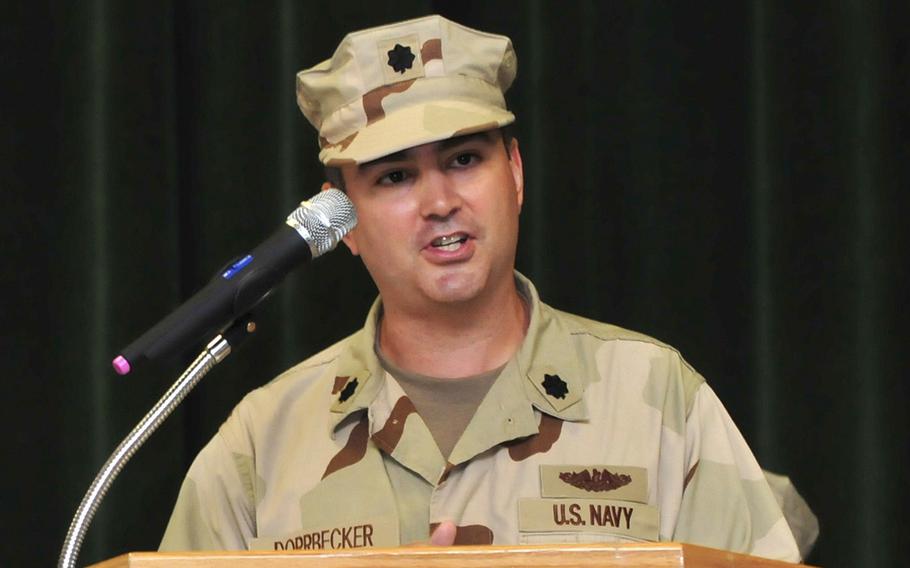 A Navy captain who brought wine, a piggy bank and condoms to a purported sleepover with an adolescent he met at a Naples base library was properly found guilty of attempting to sexually abuse and assault a child, the Navy’s appellate court ruled.

The court affirmed May 29 the verdict and eight-year prison sentence handed to Capt. Alan Dorrbecker at a court-martial in Norfolk, Va., two years ago.

Dorrbecker, a married submarine commander in his forties, had argued in his appeal that his actions could have constituted only the lesser crime of attempted enticement of a minor to engage in sexual activity.

The court ruled that Dorrbecker’s journal and emails to Navy investigators posing as the girl — who happened to be the daughter of Naval Criminal Investigative Service employees — demonstrated his intent to commit the crimes.

His arrival at the house for the fake sleepover carrying condoms and lubricant was the “substantial step” toward completion the law requires for attempted offenses, the court said.

Two of three judges on a Navy-Marine Corps Court of Criminal Appeals panel decided that although emails between Dorrbecker and a Navy investigator posing as the girl showed Dorrbecker would not have kissed, caressed or had intercourse with the girl unless she agreed to it, that didn’t matter. The girl was 14 or 15, according to court documents.

“If an accused decided to rob a bank and drove up to the bank with a gun in furtherance of his plan, but then abandoned his plan when he saw an armed guard inside the bank, he would still be guilty of attempted bank robbery,” the decision said.

A third judge disagreed with that analysis. Dorrbecker’s desire to have sex with the girl “did not constitute the required criminal specific intent to commit sexual assault and sexual abuse of a minor” because the evidence showed that Dorrbecker and the investigator posing as the girl had not agreed to “proceed or not with sex.” They had agreed only to discuss it, court documents stated.

Dorrbecker met the girl in 2015 at the library at Naval Support Activity, Capodichino, in Naples, Italy, where she was a part-time summer hire.

Dorrbecker gave her his email so he could send her information on a website offering free books, and for the next week the two emailed each other about books, music, school and family life, according to court documents.

The girl’s parents found out about the emails and agreed that Dorrbecker might be “grooming” the girl for sex. NCIS opened an investigation and a special agent assumed the girl’s identity with a new email address, saying her “parents” were monitoring her old address.

Soon, Dorrbecker started emailing sexually explicit stories he called “tales of the bizarre.” He did not solicit sex or ask for photos of the girl, according to court documents.

Meanwhile, the special agent, acting as the girl, told Dorrbecker that she thought about kissing him and asked if he wanted to kiss her. He said he did.

“As the NCIS operation progressed, the agent initiated sex-related discussions at an increasing rate,” according to court documents.

“The appellant responded to (the girl’s) concerns with detailed and lengthy answers that indicate he was genuinely trying to be helpful to her,” the documents said. “He also increasingly discussed his romantic interests in her.”

Dorrbecker’s journal writings and emails, all admitted as evidence, showed him wrestling with, then justifying his lust for the adolescent girl he inexplicably called “Drops.” “I cannot believe that I am conniving to betray my wife with a teenager,” he wrote in his journal.

Dorrbecker thought his feelings were reciprocated. “Drops has declared her love for me in texts and strongly hinted at it in emails,” he wrote.

“I know the world writ large would condemn me as a monster, a pervert, someone who would prey on the innocence of youth for my own gain,” he wrote in an email. “I would lose my job, most of my life savings, be labeled as a sex offender..., lose my family — all because I want to hold you close, feel your skin, gently caress your cheek, smell the fragrance of your hair.”

In November 2015, Dorrbecker suggested a rendezvous, which the special agent agreed to, but then sent regrets.

Sometime after that the agent suggested Dorrbecker join “Drops” for a sleepover while she was dog-sitting. He agreed the idea was “very, very exciting!!”

Dorrbecker was arrested as soon as he entered the house.