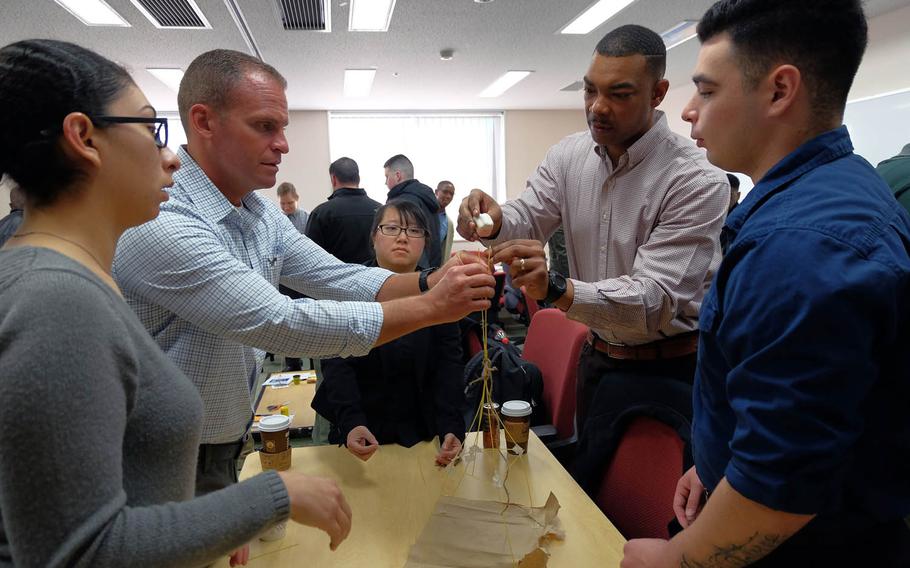 Sailors try to build a structure made of marshmallows and spaghetti during an innovation workshop at Yokosuka Naval Base, Japan, Friday, Jan. 24, 2017. (Tyler Hlavac/Stars and Stripes)

YOKOSUKA NAVAL BASE, Japan — As the U.S. 7th Fleet prepares for threats as diverse as North Korean ballistic missiles and Southeast Asian piracy, it is also focusing on an internal, less tangible threat: complacency.

A Navy loaded with high-tech weaponry could be out-maneuvered by scrappy adversaries with clever ideas, officials told sailors during the workshops, held at Yokosuka and Sasebo naval bases and Naval Air Facility Atsugi, by U.S. Fleet Forces Command’s Illuminate Thinkshop.

The Navy is calling for cultural change to spur innovation — a tall order for any institution, let alone one as regimented as the military.

“Our adversaries are innovating rapidly and the fear is our system is not keeping up,” said Lt. John Knudson, 7th Fleet’s newly appointed innovation officer. “It’s not about new ships and not about the weapon systems. If we can innovate faster than our adversary, then that is how we maintain our advantage.”

The 7th Fleet culture shift is a challenge for deployed sailors in a region full of strong potential adversaries, Knudson said. However, some U.S. adversaries have been quick to embrace innovation.

Islamic State early on placed a premium on innovation, embracing low-cost ideas like social media to outgrow and outpace rival organizations like al-Qaida, Wired reported in an April story.

The call for Navy innovation is coming from the service’s top officer, Chief of Naval Operations Adm. John Richardson.

Sailors should come up with innovative ideas ranging from “repurposing current weapons for additional uses in the short term, to designing innovative new surface combatants and submarines that may not resemble the ships in today’s fleet,” according to an August interview with USNI News. The Navy is also looking for smaller-scale solutions. One sailor helped invent a needle gun that enabled faster paint removal.

The Illuminate group trained “unit innovation facilitators” while in Japan to solve problems, come up with ideas and encourage sailors to think imaginatively.

The facilitators will put sailors in touch with people who can mentor them, then help shape and present ideas to leaders, Knudson said.

“Innovation is hard,” Knudson said. “You’re going to hear ‘no’ a thousand times when you have a new idea.”

The Navy struggles with bureaucracy and is quick to rely on outside organizations for innovation, said Capt. Chris Brunett, one of the Illuminate group’s leaders.

“We probably have the solutions to any problem we encounter within the military, within our own people,” he said. “It’s a matter of tapping that potential. Change is hard; people don’t like change. But to get better we have to change.”

The officers all acknowledge that there are serious challenges for the 7th Fleet as it strives to change.

Brunett and Knudson said the Navy has dominated the seas for decades and that some complacency has set in.

Some commanders support innovation but others see it as a distraction from their duties, said Knudson, who added some sailors sent to train as innovation facilitators hold low ranks and might not have much influence within their command.

Facilitators’ duties are in addition to their occupational specialties, and there’s a risk they become a forgotten side item, he said.

Several sailors expressed concerns to Brunett that their ideas might be torpedoed by chief petty officers who might not have the time or desire to consider their suggestions.

It will ultimately be up to senior leaders to examine whether those factors become impediments as the program moves forward. The plans to spur innovation are being backed by 7th Fleet Commander Vice. Adm. Joseph Aucoin, who invited the Illuminate Thinkshop to host the events.

“We need to build a culture of innovation into our organization at all levels from the sailors and Marines on the deck plates to our senior leaders and our civilian workforce,” Aucoin said in a statement. “We cannot sit back and simply hope for innovation to happen.”