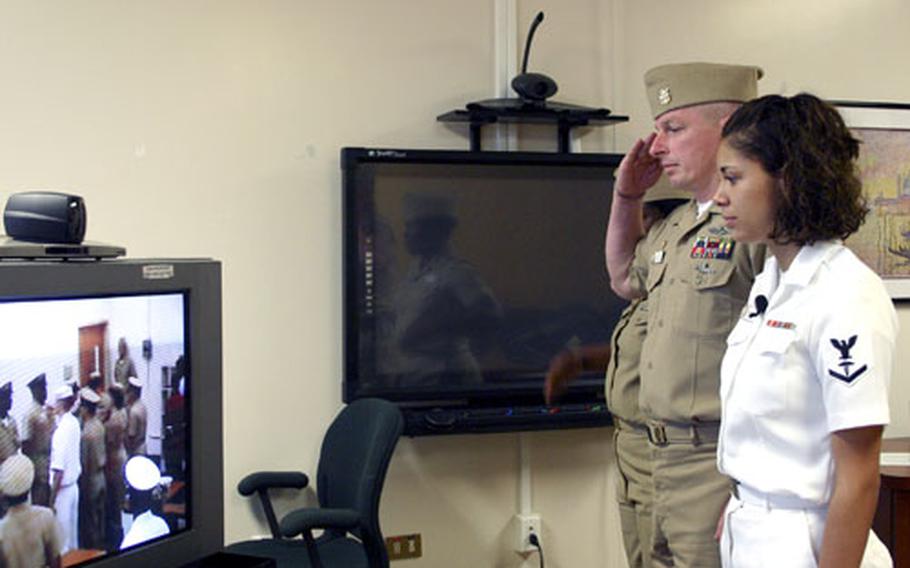 NAPLES, Italy &#8212; Senior Chief Petty Officer Rhonda John can leave behind her 22 years as a sailor because she knows her daughter is there to fill the void.

As John made the ceremonious walk between two lines of sailors whom the Navy calls &#8220;side boys,&#8221; marking a passage from military life to civilian, her daughter uttered powerful, ritualistic words: &#8220;Senior Chief John, you stand relieved. I have the watch.&#8221;

Family, friends and co-workers gathered Friday at two spots separated by an ocean for a &#8220;time-honored naval tradition &#8212; [but] with a twist,&#8221; said Chief Warrant Officer 4 Steven Jones.

John&#8217;s ceremony is the Navy&#8217;s first known video teleconferenced retirement, broadcast from the Center for Service Support in Athens, Ga., to the naval hospital in Naples.

Williams&#8217; father, retired sailor Cleveland Dilworth, died in January, and the young dental assistant had used all her leave so was unable to attend her mother&#8217;s retirement in person.

John was a single mother raising three children, of which Williams is the oldest.

It was Williams who made John such a success in the Navy, the mother said during her retirement speech.

Williams took charge of caring for her brothers while her mother deployed.

&#8220;I know now as a sailor, you sacrificed a lot for me and the boys,&#8221; Williams read from a speech she wrote moments before the start of the ceremony.

&#8220;I know that today is the hardest day for you in your military career, but you still have us, and I will carry on your military tradition.&#8221;