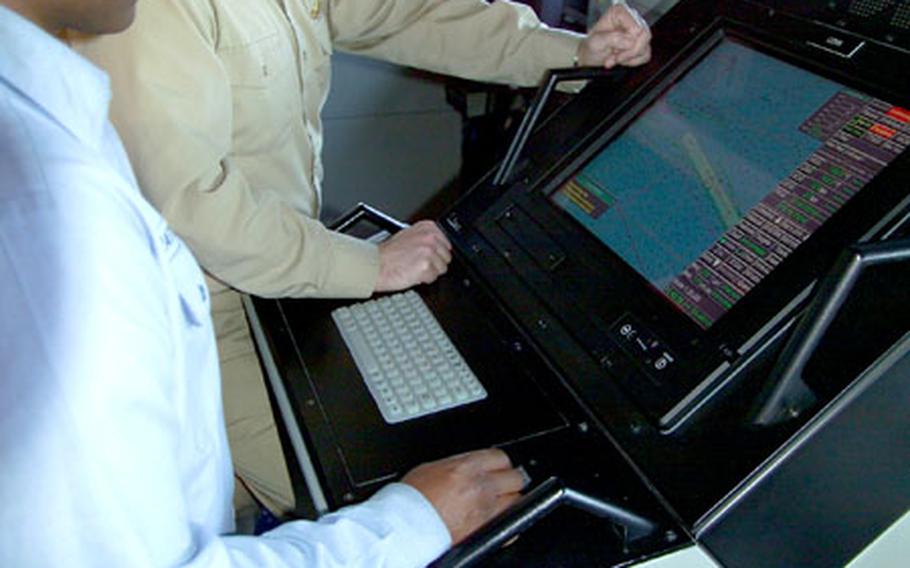 WASHINGTON &#8212; Sailors on the USS Cape St. George have traded in their pencils and paper charts for CD-ROMS, and are plotting their course across the ocean electronically.

The ship is the first in the Navy fleet to switch from paper maps to a new digital charting system, linked to global positioning satellites and instant updates on ocean obstructions. Sailors on board were certified earlier this year, and began using the new technology in May.

The new system also may have been able to prevent the accident aboard the USS San Francisco in January, Freeman said.

One sailor was killed when the submarine crashed into an undersea mountain. Navy investigators said navigators were using a map that did not show the hazard; other charts available did show the danger.

The electronic system includes flashing warning lights for a ship&#8217;s bridge in case an underwater hazard is detected, Freeman said.

The Navy, which has been working on the new technology since 1998, plans to install and use the new digital maps on the entire fleet by 2009. Freeman said several ships, including the submarine USS Oklahoma City, will transfer to the new system by the end of the year.

But one big change will be the information available at their fingertips. Stephen Honda, spokesman for the National Geospatial-Intelligence Agency, said navigation charts for the entire ocean can be held on 29 CD-ROMs, instead of more than 5,000 paper charts that sailors use today.

And, because the on-board computer is in charge of monitoring the geography and plotting courses, the ships&#8217; drivers can react much more quickly to problems.

Honda said the computerized maps also allow information on landmarks and port facilities to be superimposed on the nautical charts as ship officials decide where to go.

So far, sailors on the USS Cape St. George have been pleased with the new system.

&#8220;It is much easier to correct and change the charts,&#8221; said quartermaster Aaron Haverty in an e-mail to Stripes. &#8220;The new system is a vast improvement compared to the old forms of electronic navigation.&#8221;

Freeman said for now ships that switch to the digital maps will still be required to carry paper back-ups with them.