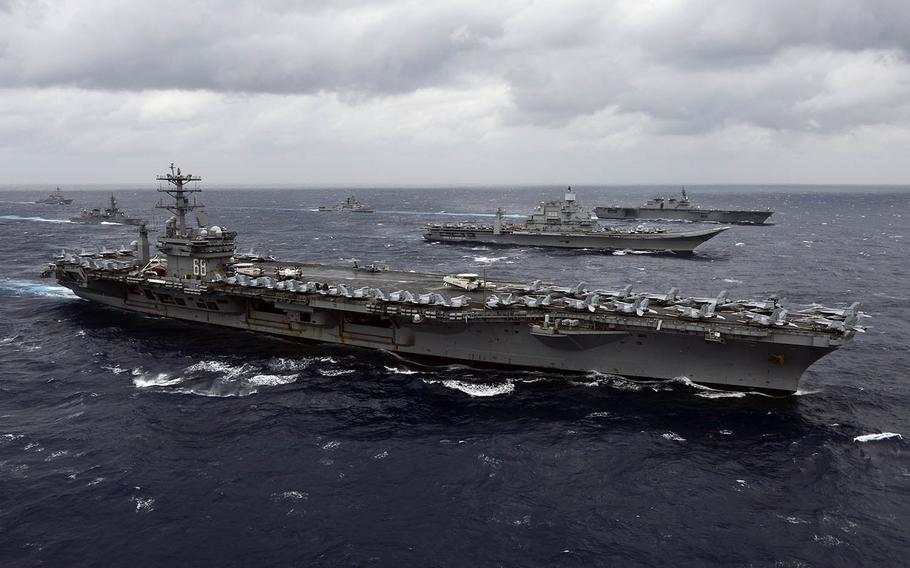 Ships from the U.S. Navy, Indian Navy and Japan Maritime Self-Defense Force sail in formation in the Bay of Bengal during Malabar 2017. (Cole Schroeder/U.S. Navy)

The Navy kicked off a nine-day training exercise with India and Japan one week after U.S. Pacific Command changed its name to U.S. Indo-Pacific Command.

Malabar 2018 began Thursday on Guam and will continue through June 16, with naval ships, aircraft and personnel from the three countries training on land and sea.

Malabar began 26 years ago as an exercise between the U.S. and India, with Japan joining the annual training permanently in 2015.

In past years, the exercise included countries such as Australia and Singapore. Australia hoped to rejoin Malabar again this year, but was not invited, according to a U.S. Naval Institute report. Some Indian and Australian analysts have said the decision may have something to do with Chinese pressure on India.

Malabar, which is being held on Guam for the first time, was halted from 1998 to 2002 while India was conducting nuclear weapons tests.

This year’s exercise comes at a time when Navy leaders have been speaking out about the growing strategic importance of India and the Indian Ocean, inspiring PACOM to change its name to INDOPACOM on May 30.

“Indian, Japanese and U.S. maritime forces have a common understanding and knowledge of a shared working environment at sea,” the Navy said in a statement. “Each iteration of this exercise helps to advance the level of understanding between the nations’ sailors as members of Indo-Pacific nations.”

The Navy said Malabar “has grown in scope and complexity over the years to address the variety of shared threats to maritime security.”

This year, the countries will have expert and professional exchanges and train in maritime patrol and reconnaissance strategies, surface and anti-submarine warfare, medical operations, damage control, helicopter procedures and visit, board, search and seizure operations while ashore in Guam, the Navy said.

“The at-sea portions … are designed to advance participating nations’ military-to-military coordination and capacity to plan and execute tactical operations in a multinational environment,” the Navy said in the release.