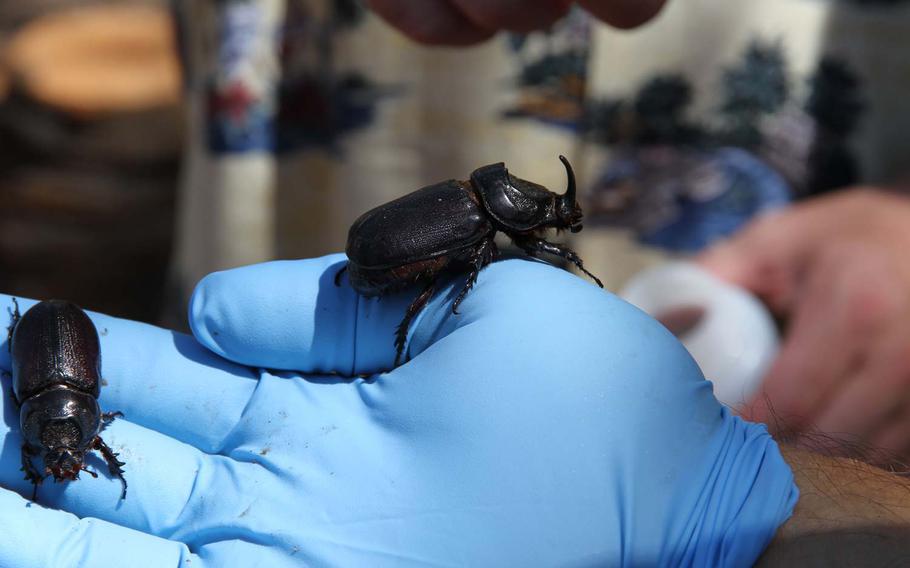 A technician holds two coconut rhinoceros beetles in his gloved hand that were found Wednesday on Joint Base Pearl Harbor Hickam. The beetle earned its name for its ravenous appetite for palm trees and rhino-like "horn" jutting from the head. (Wyatt Olson/Stars and Stripes)

A technician holds two coconut rhinoceros beetles in his gloved hand that were found Wednesday on Joint Base Pearl Harbor Hickam. The beetle earned its name for its ravenous appetite for palm trees and rhino-like "horn" jutting from the head. (Wyatt Olson/Stars and Stripes) 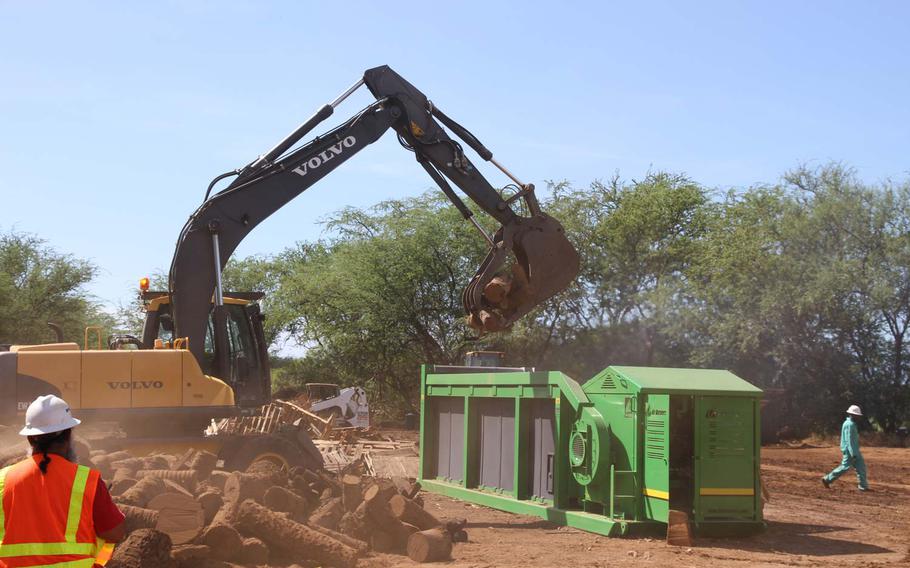 Workmen fill an incinerator with the chainsawed remnants of more than 100 palm trees cut down on Joint Base Pearl Harbor-Hickam that had been damaged by coconut rhinoceros beetles. (Wyatt Olson/Stars and Stripes) 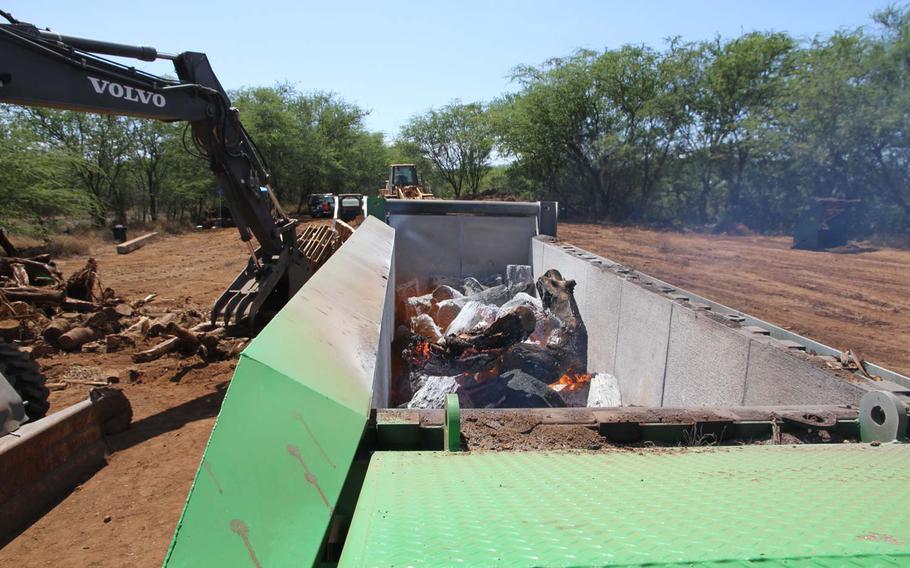 The air curtain burner-style incinerator is designed to burn at high temperatures with little smoke by creating a flow of air around the burning mass, such as these palm tree logs loaded into it with a front-end loader. (Wyatt Olson/Stars and Stripes) 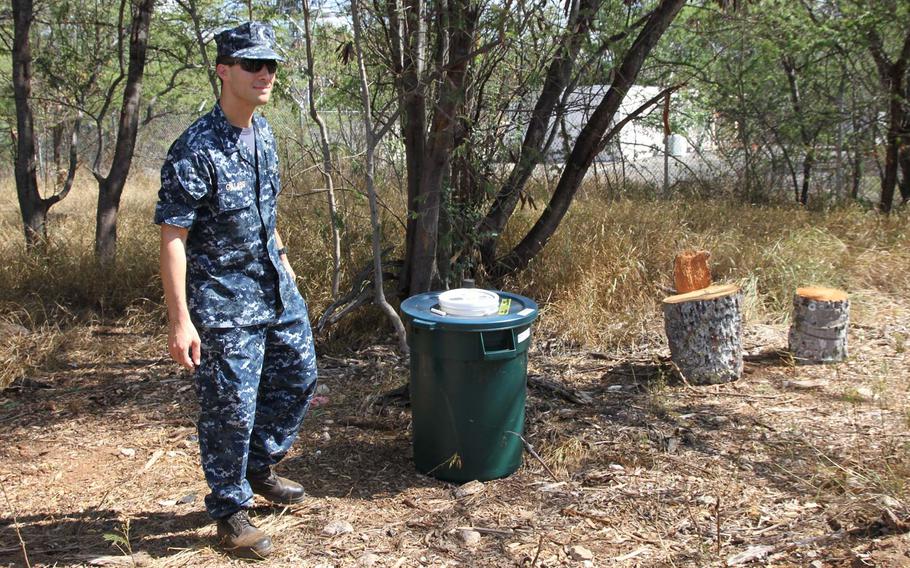 Lt. j.g. Eric Galassi on Wednesday stands beside one of the barrel-style beetle monitors deployed throughout Joint Base Pearl Harbor-Hickam, which are baited with pheremones, UV lights and rotting palm wood. Earlier in the morning Galassi had discovered a beetle lying on its back atop the monitor, unable to right itself. (Wyatt Olson/Stars and Stripes)

FORT SHAFTER, Hawaii — There’s a war raging at Joint Base Pearl Harbor-Hickam, and the Navy is bringing in real firepower.

The enemy is an invasive insect from Southeast Asia called the coconut rhinoceros beetle, whose destructive munching on palm trees has the potential to disrupt coconut and date farming in Hawaii — and in California if the exotic pest is inadvertently carried to the mainland.

State agencies and the military have spent about $5 million this year to detect and eradicate the beetle, which can grow to 3 inches long and about half that width. The first beetle was discovered in December in a green space on the base that borders Honolulu International Airport.

The Navy’s share of the eradication expenses is about $2 million, according to Tom Clements, a Navy Region Hawaii spokesman.

Of primary importance is finding and destroying the beetles’ breeding areas — ideally dead and decaying plant and tree matter.

On Wednesday, workmen at the base were busy loading logs from roughly 120 palm trees cut from around the base into a huge incinerator called an air curtain burner. The truck-sized implement uses a diesel-run blower that continuously forces the fire’s smoke back through the incinerator. This both reduces emissions and elevates the fire’s heat up to 1,700 degrees Fahrenheit, said Rob Curtiss, a pest-control expert with the Hawaii Department of Agriculture.

Curtiss said about 180 of the thousands of palm trees on the base had been identified as damaged by beetles. Most of those have been cut and burned, but roughly 50 have been left standing.

“We want to keep some for pesticide testing,” Curtiss said. “What we’ve noticed is that once a tree gets damaged, it tends to get repeated damage, so it becomes more attractive to the beetles. We can use those as test sites for trying to find some of these pesticides that might be effective.”

The incinerator now in use was purchased by the Hawaii agriculture department. The Navy is buying two to three for long-term use.

“Ideally, we don’t want any more plant material to leave the base,” Curtiss said. That means all grass clippings, leaves, branches and tree remains will be either burned or composted in an enclosed method that raises the mulch’s temperature to at least 170 degrees Fahrenheit — which is hot enough to kill the beetles, Curtiss said.

It’s not known how the beetles arrived in Hawaii, although given the proximity to the airport, it is assumed they most likely hitched a ride aboard the running gear of a plane.

Flights routinely arrive here from places where the beetles are commonly found, such as Thailand, Japan and Guam, Curtiss said.

More than 2,000 monitor traps have been installed on or below palm trees throughout Honolulu. They are baited with a pheromone, a solar-powered UV light and hunk of smelly, rotting palm wood.

About 2,000 immature and adult beetles have been discovered so far, he said.

That number jumped significantly last week when inspectors discovered a breeding ground on Puuloa Range Training Facility, a Marine Corps rifle range across the bay from the airport.

Curtiss said they found about 500 larvae-stage beetles in a truckload-size pile of mulch.

“We were talking to one of the patrol guys there, and he said there’s some mulch piles back in the woods on the range that you can take a look at,” Curtiss said. “We’d been catching beetles in that area and identified that there had to be someplace around there we hadn’t found yet.”