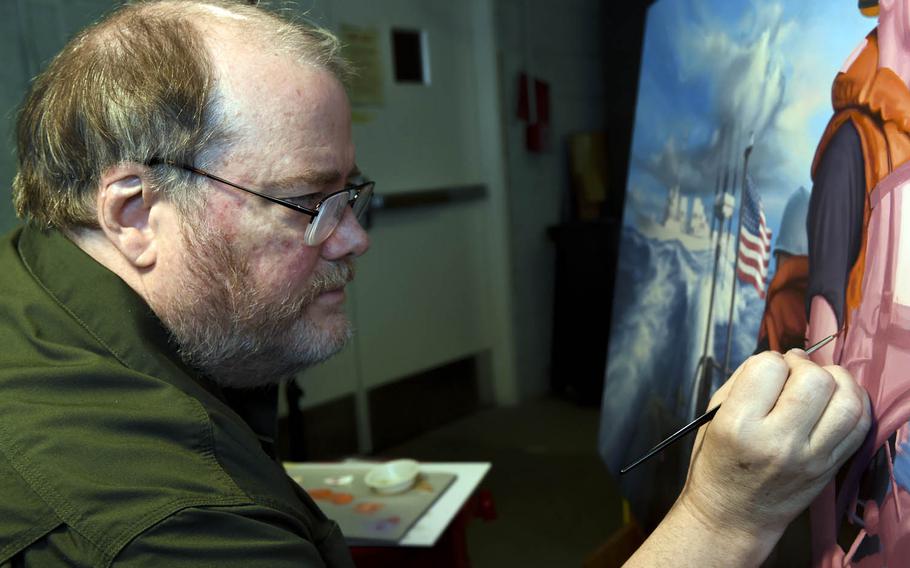 Morgan Wilbur, an artist with the Navy's Combat Art Program, paints a scene from his 2014 deployment aboard the guided-missile destroyer USS Mustin, Dec. 28, 2016. (Eric Lockwood/U.S. Navy)

Morgan Wilbur, an artist with the Navy's Combat Art Program, paints a scene from his 2014 deployment aboard the guided-missile destroyer USS Mustin, Dec. 28, 2016. (Eric Lockwood/U.S. Navy) 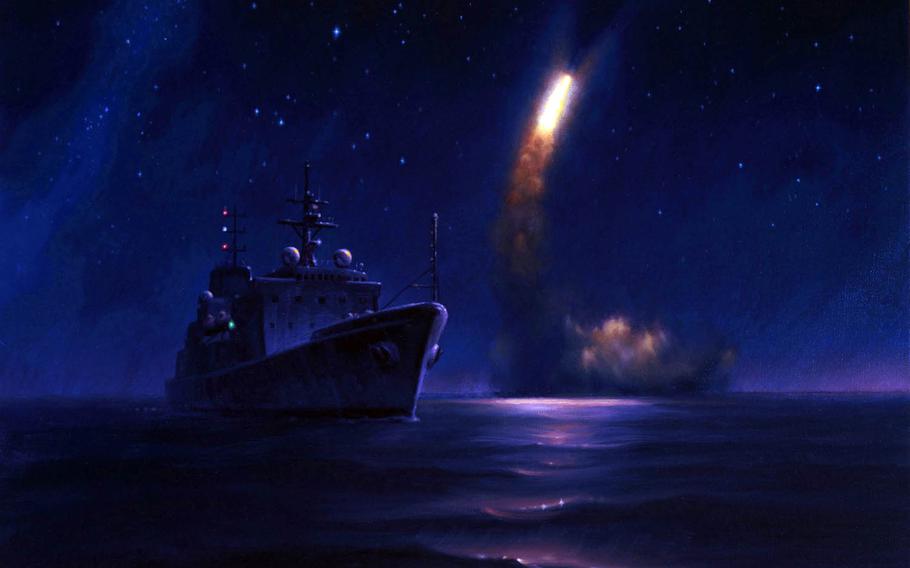 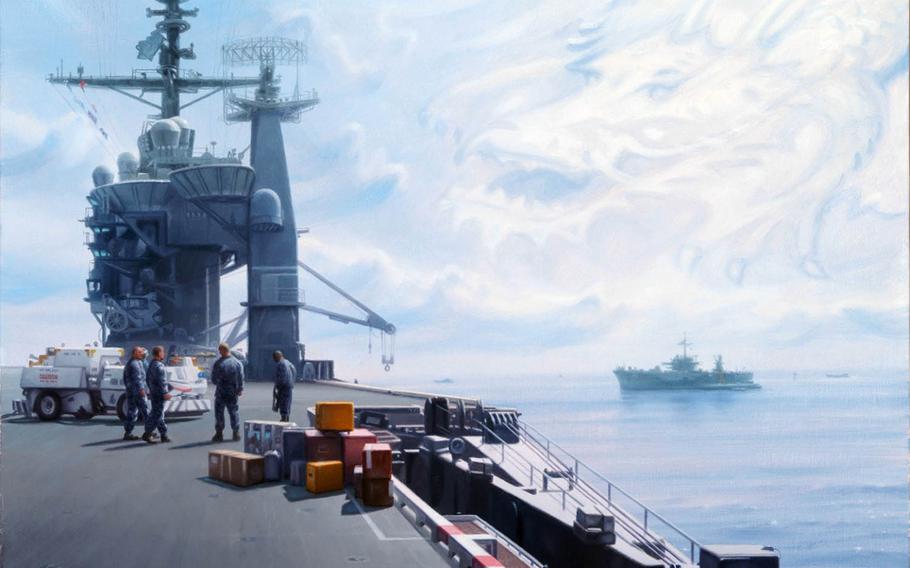 In 2015, Combat Art Program artist Morgan Wilbur painted a cloud formation in the shape of a dragon over the aircraft carrier USS George Washington departing Yokosuka, Japan. (Courtesy of the U.S. Navy) 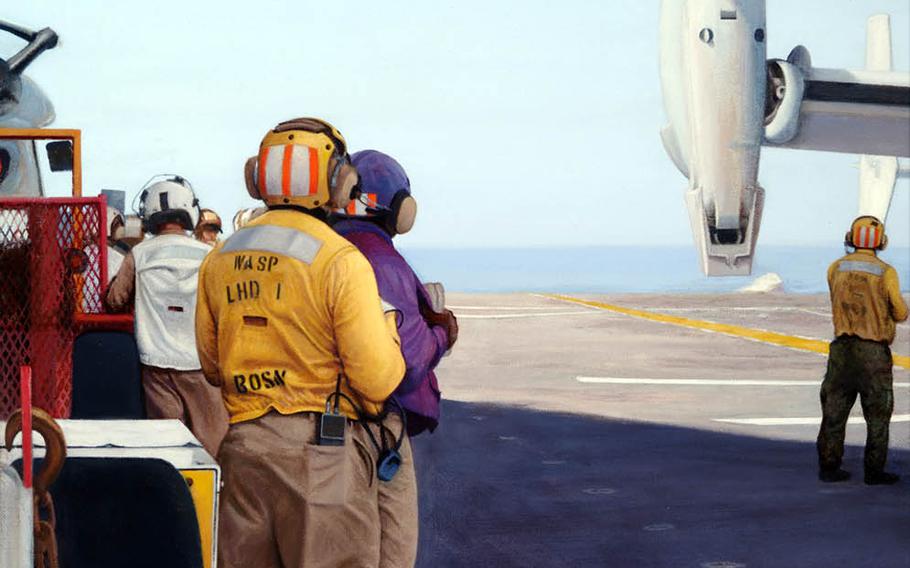 An oil painting by Kristopher Battles, one of two artists in the Navy's Combat Art Program. (Courtesy of the U.S. Navy) 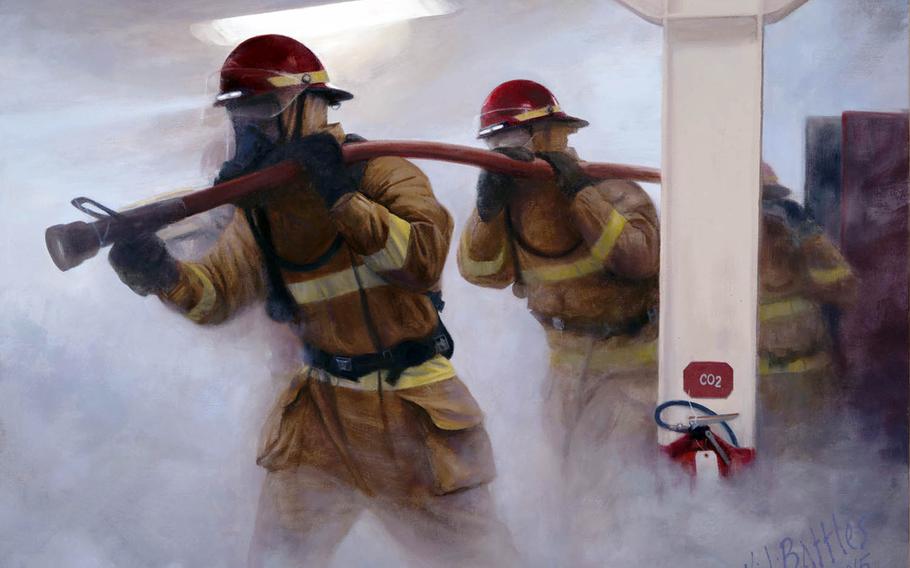 An oil painting by Kristopher Battles, an artist for the Navy's Combat Art Program. (Courtesy of the U.S. Navy) 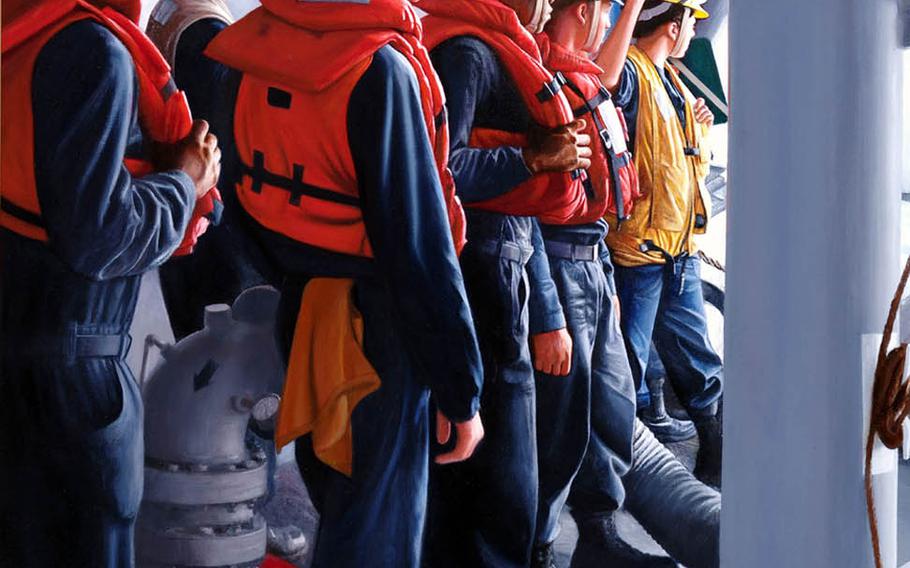 Kristopher Battles, an artist with the Navy's Combat Art Program, painted these sailors aboard the aircraft carrier USS Harry S. Truman preparing for a replenishment at sea. (Courtesy of the U.S. Navy) 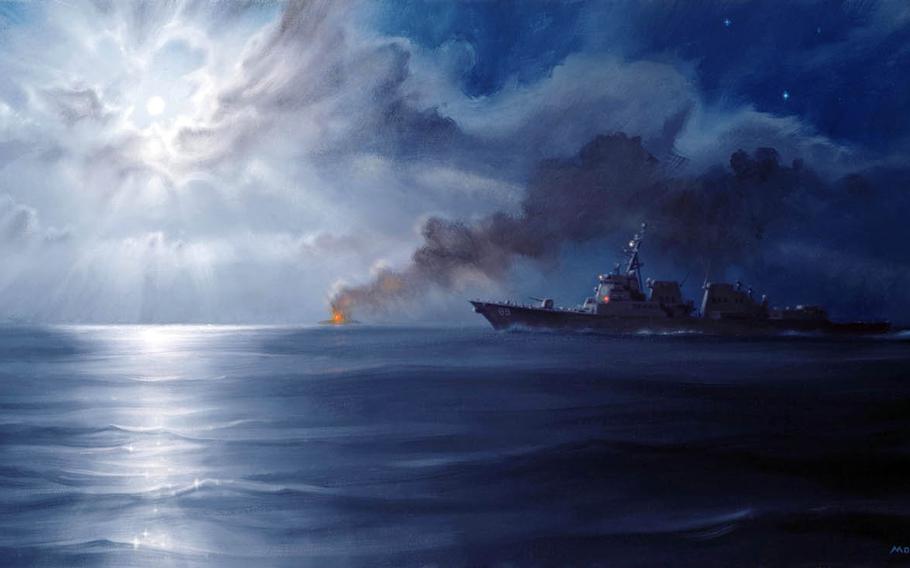 An oil painting by Morgan Wilbur of the Navy's Combat Art Program. Artists have been deploying with paints and brushes in hand since World War II to capture Navy history. (Courtesy of the U.S. Navy) 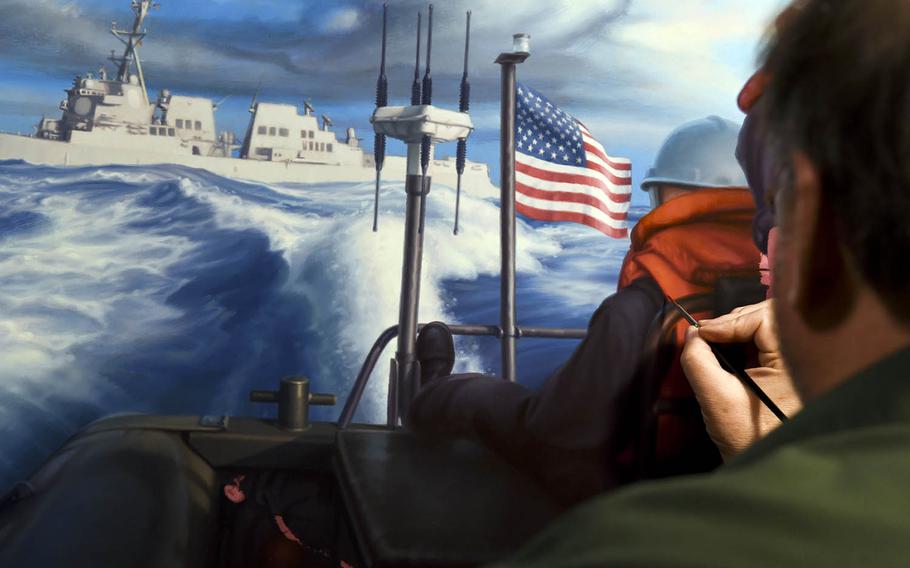 Since World War II, artists with the Combat Art Program have been deploying with paints and brushes in hand to capture Navy history. (Eric Lockwood/U.S. Navy)

Camera in hand, Navy artist Morgan Wilbur got into a small boat and went over the side of the USS Mustin during a man-overboard drill in 2014.

While sailors focused on manning the small craft and recovering a human-like dummy, Wilbur waited to capture the perfect moment — a nexus of swells, crystal-blue seas and skies, sailors with brows furrowed in concentration and the guided-missile destroyer in the background.

He waited and waited. Then it all came together. His camera flashed.

“For an artist, it’s like gold,” said the former Navy reservist, reminiscing about the scene he’s now using as the basis of an oil painting. “It was just tremendous. And I knew it at the time. I was watching it saying, ‘This is just incredible.’ ”

Wilbur, 53, of Virginia Beach, Va., is an artist with Naval History and Heritage Command’s Combat Art Program. Since World War II, its sailors have been deploying with paints and brushes to tactfully record U.S. naval history.

Wilbur is putting the finishing touches on the Mustin painting. Once it is finished, he will reach out to the sailors in the shot to show them what he has done. The artwork will then be immortalized in the Navy Art Collection, which holds more than 20,000 paintings, prints, drawings and engravings.

Wilbur said spending time with the sailors helps him to better tell their story.

“It was like visiting a family,” he said of his three days aboard the Mustin. “They really made me feel welcome. Having the time to kind of watch what they do and get to know them, it really makes for better artwork. That was a real special experience.”

The Combat Art Program was born in 1941 after a muralist cornered Adm. Chester Nimitz during a Naval Academy football game, according to Gale Munro, head curator of the Navy Art Collection. The muralist, Griffith Baily Coale, persuaded the art-loving admiral to send artists into the field with military units. Seven active-duty artists, including Coale, captured scenes from every major naval operation throughout World War II.

Since then, the program has covered every major American military conflict, sometimes working with outside artists and organizations. Along the way, the Navy began sending artists out to document noncombat naval activities.

“We go out and we experience fleet operations and the people,” Wilbur said. “For me, the things that make the biggest impact are usually what I turn into paintings when I come back.”

Wilbur began contributing paintings to the Navy’s collection in the 1990s while working as art director for Naval Aviation News magazine. After a few years, the Navy brat who was taught to draw and paint by his Navy pilot father began to deploy.

In 2002, Wilbur documented Operation Enduring Freedom from the nuclear-powered supercarrier USS John C. Stennis. He began focusing on sailors after his first trip to Iraq in 2003 and a visit to a Navy field hospital where he witnessed surgeries.

“I try to concentrate on people,” he said. “I still do the ships and the planes, but it’s painting the people I get to meet and observe that gives me the most satisfaction.”

He began painting for the Navy full time about four years ago. Navy artists deploy about once a year. The program employs two artists — Wilbur and Kristopher J. Battles, 49, a former Marine sergeant and transplant from its combat-art program.

Wilbur’s process usually starts with photographs, but he also does rough sketches and takes detailed notes. That can come in handy in darker situations where taking a photo isn’t practical.

Wilbur and Battles said they are given nearly total artistic freedom, a surprising aberration in the highly structured and rigid military world. They are free to challenge each other and to experiment with different concepts and artistic styles. Wilbur usually paints the scenes verbatim, but some works are totally conceptual. For example, he painted a cloud formation that looked like a dragon above the USS George Washington leaving Yokosuka, Japan, in 2015.

“I feel very lucky that we have such artistic freedom,” Wilbur said. “We have a good idea of what the art collection needs as far as the Navy but we have total freedom over what we paint.”

“When we’re long gone, this will be part of the Navy Art Collection and people can look back and say this is what it was like in 2016, 2017; that’s what it was like back in the war on terror, or whatever,” he said. “It’s a great feeling.”

Munro said the art program will continue into the future.

“The Navy is moving forward at a rapid pace,” he said. “We just want to keep up” with documenting the progress.