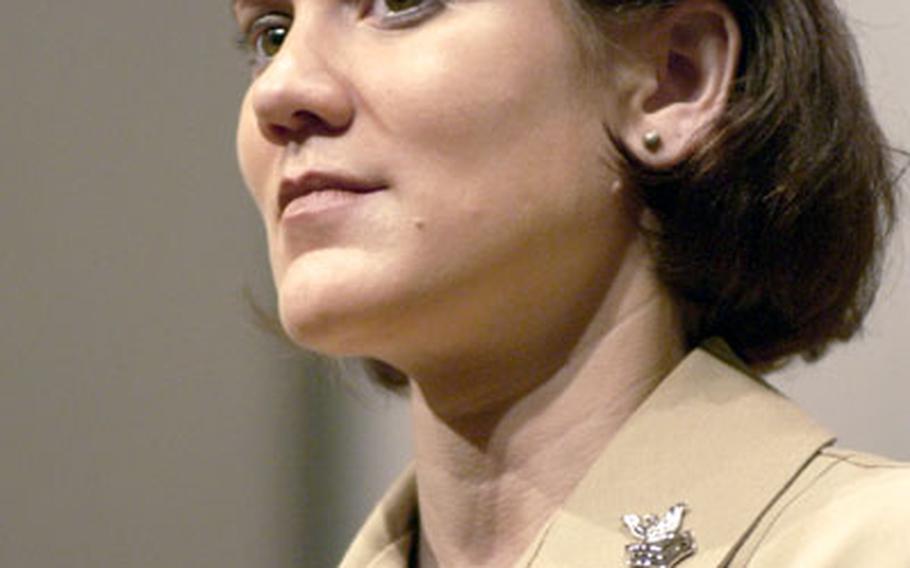 Sailors, prepare for some changes in your seabag.

The dungaree utility uniform is going the way of the dinosaur, and the &#8220;Johnny Cash&#8221; is being retired as Navy officials authorize two new working and service units.

Seven working uniforms from the officer and enlisted ranks are being phased out and replaced by a single blue digital-patterned camouflage uniform. Summer whites and the &#8220;Johnny Cash&#8221; winter blues will be replaced for E-6 and below with a year-round service uniform of khaki shirt and black pants.

The blue, digital camouflage uniform, with the Navy and Marine Corps&#8217; traditional eight-point cap, will be called the Navy Working Uniform and worn by all sailors and officers.

While many sailors have yet to see the uniforms in person, some in Europe have already had the chance to wear them.

The 13-year veteran, however, said he probably just hasn&#8217;t warmed to the idea of changing uniforms.

But Petty Officer 2nd Class Nick Slocum is more than ready for a change.

The new year-round service uniform for E-1 to E-6 personnel will include an untucked &#8220;over blouse&#8221; shirt for women, similar to those worn by the other services. And gone is the sew-on rank &#8212; the new uniform requires silver collar devices.

Slocum still has another 1&#189; years of ironing: The new uniforms aren&#8217;t expected to be available until the fall of 2007, according to a Navy news release. Sailors going through recruit training will get them first.

But once the uniforms are available to sailors, the release states, they will receive extra money in their paychecks to pay for them.

The release stated that officials are still looking into a handful of other changes, including the implementation of a Navy-wide physical fitness uniform, bringing back the coat-and-tie service khaki uniform, adoption of a ceremonial cutlass for chief petty officers, and creation of a new servicewide, all-weather coat.

Navy uniform changes to take effect in 2007The Navy will be changing uniforms in fall 2007 to a camouflage working uniform and a single-service uniform for E-6 and below. The uniforms are:

This is a predominantly blue digital-patterned camouflage uniform made of a permanent press cotton and nylon blend. Two pockets are above the upper chest and two more on the sleeves. Over the left breast pocket is an embroidered Navy insignia.

It is worn with a blue cotton T-shirt, blue camouflage eight-point cap, black web belt, black leather boots or, for those not on ships, optional polish-free suede boots.

Men will wear a belt with their trousers, while women will have the option of beltless pants.

The uniform will be topped with a black unisex garrison cap.

Silver anodized rank insignias will be worn on shirt collars and garrison caps.