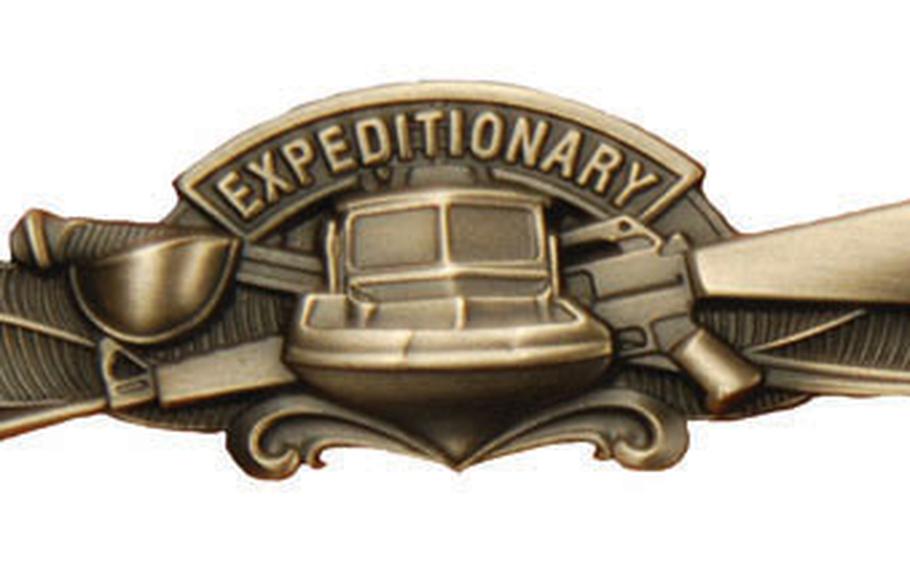 The new expeditionary warfare pin is to be awarded to sailors on sea duty who are permanently assigned to Naval Expeditionary Combat Command. (Courtesy of U.S. Navy / S&S)

ARLINGTON, Va. &#8212; The Navy has approved a new expeditionary warfare pin for enlisted sailors on sea duty who are permanently assigned to Naval Expeditionary Combat Command.

The Navy Times first reported that the Navy approved the pin for NECC sailors.

About 20,000 sailors are eligible for the pin; more than 3,000 of them are overseas, NECC Force Master Chief Anthony L. Santino told Stars and Stripes.

Eligible sailors include those involved in riverine warfare, naval coastal warfare both active and reserve, and mobile security squadrons, he said.

Explosive Ordnance Disposal technicians and Seabees are also part of NECC but must first complete their own warfare programs before they can qualify for this pin, Navy officials said in a Tuesday conference call. Sailors serving as individual augmentees assigned to non-NECC units are not eligible for the new pin.

Individual augmentees make up about 8,500 of the 12,300 sailors serving on the ground in the U.S. Central Command Area of Responsibility.

The Navy does not yet have the personnel to test individual augmentees downrange to make sure those attached to other branches of the service have mastered the skill sets in expeditionary warfare required for the pin, a Navy official told Stripes on Monday.

The Navy is considering whether to give all individual augmentees their own pin, badge, ribbon or medal as part of a review of new incentives for sailors serving in combat zones.

Individual augmentees are eligible for noncombat awards from other branches of the service, such as the Army Achievement medal.

The first, &#8220;core competencies,&#8221; is a set of skills useful to a servicemember in a hostile environment, such as small-arms proficiency, roadside bomb detection skills and convoy operations, Beaufort said in a Monday e-mail to Stripes.

The second set of skill sets is &#8220;unit specific,&#8221; meaning a sailor assigned to Naval Coastal Warfare would need to know small-boat operations and other such skills, he said.