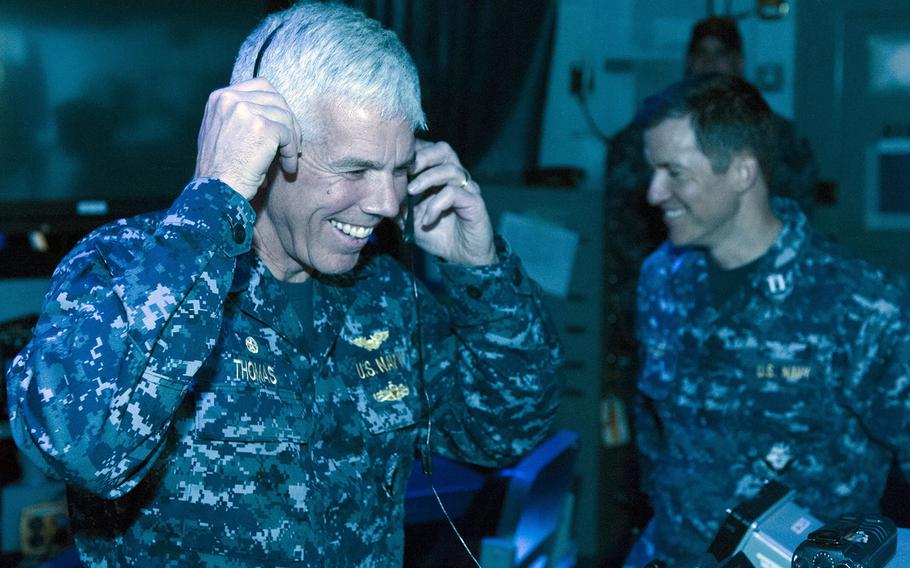 Then-Capt. Karl Thomas, commander of the USS Carl Vinson, is seen aboard the aircraft carrier in March 2016. (Giovanni Squadrito/U.S. Navy)

YOKOSUKA NAVAL BASE, Japan — The Navy has nominated an E-2C Hawkeye pilot to lead a troubled task force that includes the aircraft-carrier USS Ronald Reagan, its carrier wing and an armada of forward-deployed cruisers and destroyers.

The collisions of the USS Fitzgerald and USS John S. McCain were part of a string of mishaps involving the task force, including the November crash of a C-2A Greyhound assigned to the Reagan’s air wing that killed three and the grounding of the USS Antietam in Tokyo Bay in January 2017.

Thomas, who now directs the 21st Century Sailor Office in Arlington, Va., commanded Carrier Airborne Early Warning Squadron 117 during Operation Iraqi Freedom and the aircraft carrier USS Carl Vinson during a deployment in support of Operation Inherent Resolve in 2014. He was executive officer on the aircraft carrier USS George Washington when it forward-deployed to Japan in 2008.