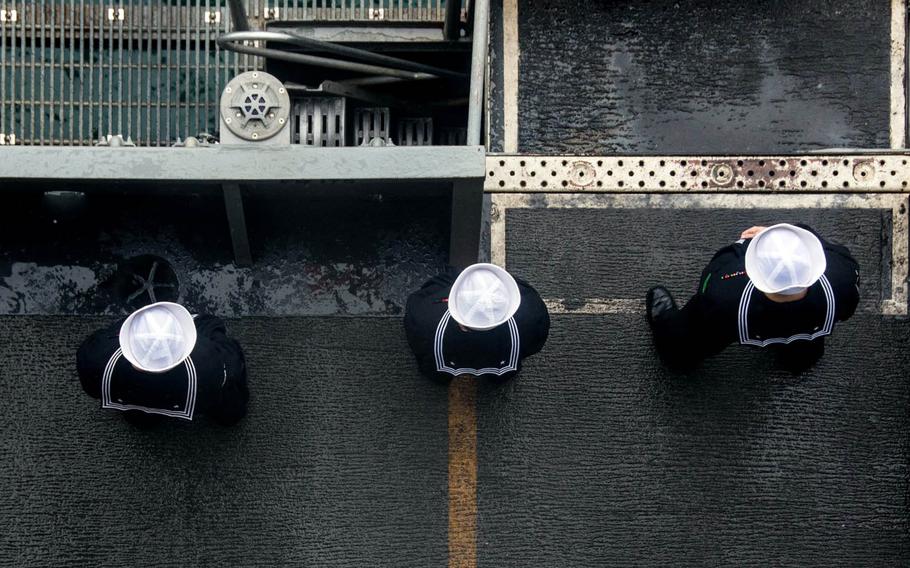 Sailors man the rails on the flight deck of the USS Ronald Reagan as the ship pulls into Busan, South Korea, for a port visit, Oct. 16, 2016. The Navy has issued preliminary guidance for issues arising from sailors seeking gender transition, noting that no changes will made to the service's physical readiness program for those individuals. (Kenneth Abbate/U.S. Navy)

The Navy on Monday issued preliminary guidance for issues arising from sailors seeking gender transition, noting that no changes will made to the service’s physical readiness program for those individuals.

As of Oct. 1, 2016, transgender sailors could begin the process to officially change their gender in the Navy’s personnel administrative systems.

Beginning July 1, 2017, transgender applicants will be allowed to join the U.S. military.

The policy change affects only active-duty and reserve Navy personnel.

“To remain the finest seagoing fighting force the world has ever known, the Navy needs men and women who are the right fit for the right job regardless of race, gender, sexual orientation, creed, or gender identity,” a Navy statement said.

“If the individual can meet the Navy’s standards, they should be afforded the opportunity to serve.”

Sailors seeking to transition genders must receive a diagnosis from a military medical provider indicating that gender transition is medically necessary and develop a transition plan, approved by their commanding officer, the Navy said.

The transition plan must include a sailor’s medical treatment plan and take into consideration both the desires of the individual and “the operational requirements of the command,” the Navy said.

The Navy has determined that certain policies will need to be changed as a result of the new transgender policy.

Among the changes will be “modesty policies” that will allow increased privacy in berths, showers and toilets; “adjustment to the language” in the urinalysis program; and adding gender identity to the military equal opportunity policy.

Commanding officers, however, are prohibited from creating separate head and shower facilities or living quarters for transgender personnel, the Navy said.

Some policies will not change as a result.

“After careful review of the physical readiness program, it was determined that no change was needed to the current policy and that standards remain the same for all sailors,” the Navy said in a blog post.

There will also be no changes to standards of personal and professional conduct, the Navy said.

The Navy’s Bureau of Medicine is studying the effects of medical treatments associated with gender transition in regard to operating vehicles and aircraft.

As a result, sailors undergoing medical transition will be restricted from flying and driving, the Navy said.

The Navy statement also said there might be “impacts” for transitioning sailors who are serving in the so-called Personnel Reliability Program, in which individuals have access to nuclear, chemical or biological weapons. The statement did not provide further explanation on how transition could affect sailors in this program.

Training for commands regarding the new policy begins this month.

Training for all active-duty sailors is to be completed no later than Jan. 31 and for reserve sailors by April 30.