Navy adds 14 locations to list for war on terrorism medals 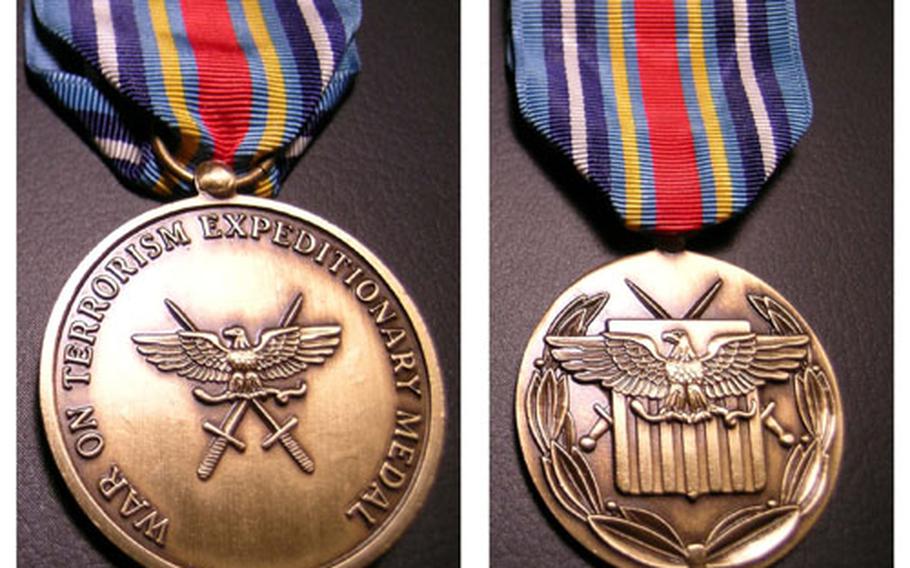 ARLINGTON, Va. &#8212; Attention, sailors who like brass on their blouses: the Navy has added 14 new locations to the list of areas eligible for the Global War on Terrorism Expeditionary Medal.

A Navy administrative message that went out to the fleet on March 31 said that sailors assigned to these locations may now qualify to wear the &#8220;GWOT&#8221; Expeditionary Medal, as long as their assignments meet the other criteria associated with the award: Algeria, Bosnia-Herzegovina, Chad, Georgia, Hungary, Mali, Mauritania, Niger, Turkey, Uganda, Colombia, Guantanamo Bay, Kosovo and the Mediterranean Sea.

But while Kosovo has been added, the medal is for &#8220;specified GWOT operations not associated with operations qualifying for the Kosovo Campaign Medal,&#8221; which is a NATO-run operation, the message said.

The Mediterranean Sea also comes with a qualifier, according to the message: Sailors must specifically have been conducting boarding and searching vessel operations.

The GWOT Expeditionary Medal, along with a homeland security version called the Global War on Terrorism Service Medal, was signed into creation by President Bush in 2003 as a way to recognize servicemembers participating in the conflict recently renamed by top defense officials as &#8220;the long war.&#8221;

The Defense Department issued general award criteria for both medals in 2004, and also called on each service to tailor the criteria to reflect the locations its forces are deployed in the war on terror.