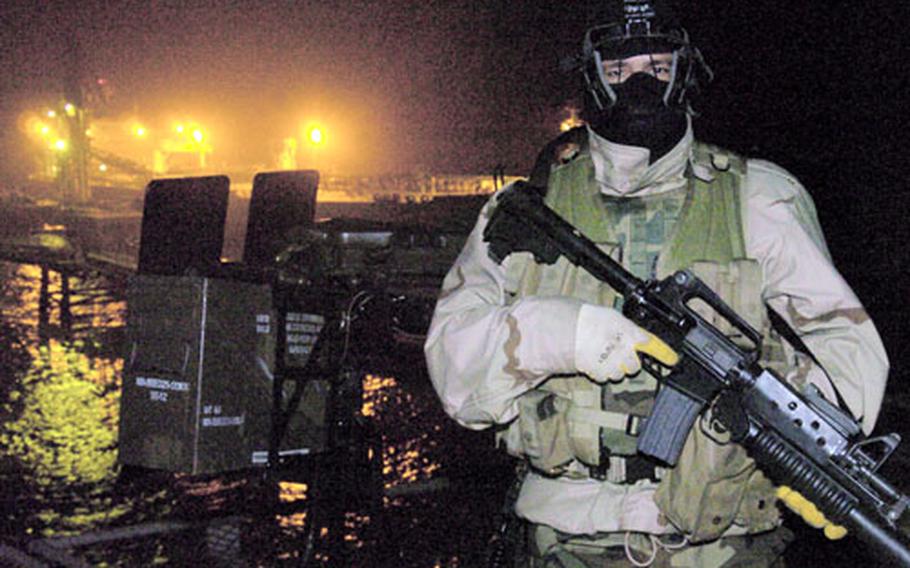 A Navy master-at-arms sailor stands security watch onboard Iraq’s Khawr Al Amaya Oil Terminal as part of a joint effort between U.S. and coalition forces to provide security against terrorist attacks against Iraq’s oil platforms. Many of the U.S. sailors spending time in Iraq come from the master-at-arms field, and the Navy is developing ways to provide better mental health counseling for them as they return. (U.S. Navy photo)

The ground war in Iraq proved too much for sailor Charles Flanning. It messed with his head.

Then, when the Navy master-at-arms returned to Naples, Italy, after four months downrange seeing &#8220;things no human should ever see,&#8221; he never got so much as a post-deployment mental health screening.

He fell through the cracks.

When Petty Officer 1st Class Samuel Salts redeployed from Iraq, he received a 20-minute debrief with a counselor in a group session.

&#8220;There was no way I was going to talk about what I was feeling with two other guys right there,&#8221; Salts, also a master-at-arms, said of the session he received more than a year ago at Naval Air Station Sigonella, Sicily.

These sailors &#8212; military dog handlers stationed at Naval Support Activity Naples &#8212; deployed to Iraq as &#8220;individual augmentees&#8221; rather than in units. The amount of counseling they received when they returned represented the norm rather than the exception as the Navy has struggled to catch up with the Army and Marine Corps in dealing with the horrors ground troops face.

Sailors returning from Iraq were not always given counseling sessions, Navy officials said.

On &#8220;rare occasions,&#8221; sailors returning to Naples were sent through counselors in Sigonella for &#8220;informational briefs [given] to one or more individual augmentees returning from deployment at the request of their parent command,&#8221; said Navy Dr. (Capt.) Chip Taylor, the executive officer at Naval Hospital Sigonella. &#8220;These informational briefs provided information on return and reintegration and recognition of symptoms for which the individual might wish to seek assistance.&#8221;

It apparently wasn&#8217;t enough in Flanning&#8217;s case. According to his legal defense team, the result of the Navy&#8217;s lapse was a mental breakdown, a battered wife and a jail sentence for the 12-year veteran. Flanning is serving nearly three months in jail after a jury convicted him Feb. 10 of choking his wife in June 2005, four months after he returned from Iraq.

Providing helpNow, thousands of sailors are gearing up for war as the Defense Department attempts to ease the strain on Army and Marine units. And the Navy&#8217;s getting ready for when they come home, said Capt. Morgan Sammons, director of clinical support at the Navy Bureau of Medicine and Surgery.

&#8220;We&#8217;re working now with the fleet &#8230; to ensure appropriate programs and personnel are on board to do screenings and provide whatever follow-on services that might be necessary,&#8221; Sammons said.

For example, at Marine Corps bases at Camp Pendleton, Calif., and Camp Lejeune, N.C., and Navy facilities in Portsmouth, Va., the Navy has contracted services with civilian behavioral health experts to fill the void, he said.

The Navy also is slowly making available ways in which sailors and Marines can complete assessment forms electronically, he said.

In 1998, the Department of Defense mandated that the services give a post-deployment survey to troops returning from downrange in an attempt to identify those who needed help. Post-Deployment Health Assessment Form 2796 must be completed either during the redeployment process while troops still are downrange or within five days upon returning to their home station.

In March 2005, Pentagon health officials sent out a new edict requiring troops be reassessed three to six months after they return, according to a Pentagon spokeswoman. But the system isn&#8217;t perfect: While the reassessment process is mandatory, servicemembers can choose how much or how little personal health information to voluntarily disclose, she said.

A 2004 Defense Department study of Army and Marine Corps troops revealed that between 15 percent and 17 percent showed signs of depression, anxiety or PTSD-related problems.

SolutionsWhen Salts urged Flanning to get help for his anger, sleeplessness, loss of appetite and anxiety, the once hard-charging military cop shrugged off the thought, insisting he was all right.

After the night he choked his wife into unconsciousness, Flanning sought counseling. He is credited with spearheading the creation of a combat-stress support group in Naples that officially started nearly five months after his attack on his wife.

Sailors, from this war and others, now meet for two-hour sessions once a week. Sometimes five or six sailors show up; sometimes as few as two attend.

&#8220;This is a support group for people who have been downrange and who want to discuss their experiences upon their return from deployments,&#8221; said Jupie Hamilton, a licensed clinical social worker who runs the program at the Fleet and Family Support Center.

The advantages are confidentiality and the sailors being among others who know what they&#8217;re going through, Hamilton said.

&#8220;This gives them an opportunity to talk about this without having to be someone under the mental health umbrella,&#8221; said Diane Furlough, a licensed clinical social worker and the Counseling Advocacy Prevention division chair for the Naples-based Fleet and Family Support Center.

Where to get help