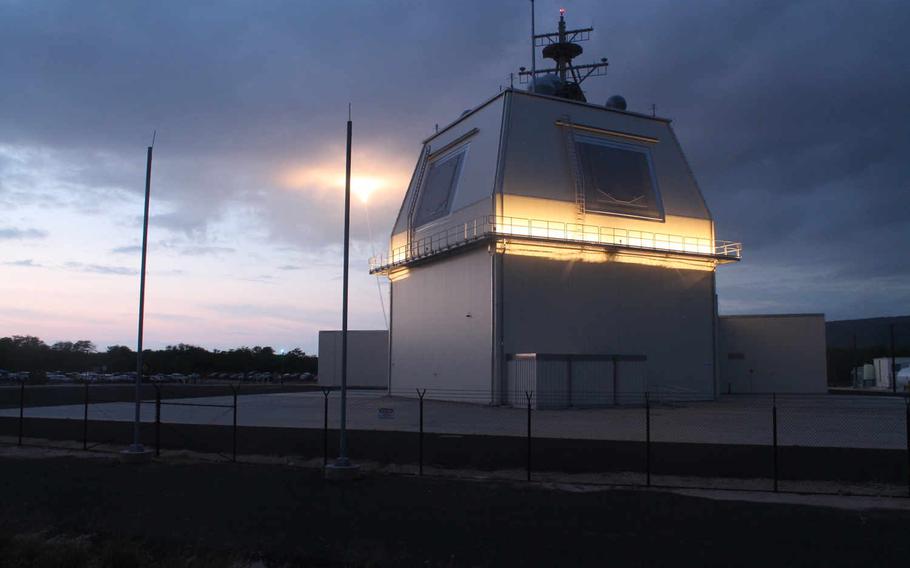 NAPLES, Italy — The U.S. Navy formally assumed control of its missile interceptor site in Romania on Friday, months before the system is expected to be functional.

Despite a presidential mandate that the Aegis Ashore interceptor site at the Romanian air base in Deveselu be operational by the end of 2015, the system has yet to reach that status or be tied into the larger NATO ballistic-missile defense infrastructure, officials say. Reaching an initial operating capacity is expected to take several more months.

The base in Romania, consisting of a battery and radar, is one of two land-based interceptor facilities being built for the European Phased Adaptive Approach, the Obama administration program to protect cities and U.S. military bases in Europe from so-called rogue states such as Iran and North Korea. The other site, now under construction in Redzikowo, Poland, is scheduled to become operational in 2018.

Other parts of the shield include a radar facility in Turkey, a command node in Germany and four American ballistic-missile defense ships stationed in Rota, Spain.

Friday’s ceremony, quiet in comparison to the fanfare that greeted those warships, comes as the U.S. and Russia increasingly coordinate on another issue — Syria, where a civil war has killed hundreds of thousands and given ground to the Islamic State group.

Syring’s agency was responsible for developing the interceptor and declaring it complete for operations. Foggo’s command, U.S. 6th Fleet, will staff and operate the system.

The Aegis Ashore system resembles its counterpart at sea, down to the four-story deckhouse that houses the high-powered SPY-1 radar. The site will hold 24 SM-3 Block IB missiles designed to destroy short- and medium-range ballistic missiles.

Russia has opposed NATO’s missile defense shield since it was first announced by the administration of President George W. Bush, which planned for a more elaborate system of long-range interceptors based in Poland and the Czech Republic. Moscow argued that neither Iran nor North Korea possessed missiles with ranges capable of reaching Europe. Russia also has criticized the sites as a threat to its strategic nuclear arsenal in the country’s west, a claim the U.S. says is technically impossible.

The Obama administration announced in 2009 that it would focus on shorter-range missiles and the offshore capabilities of Aegis-equipped ships. Citing costs and technical issues, the administration modified the program again in 2013 by canceling its final phase, which called for development of longer-range missiles capable of destroying intermediate- and intercontinental ballistic missiles.

The Navy has been developing the 269-acre site at Deveselu Air Base since October 2013, the first new base built by the service in decades. It formally took control of the base — Naval Support Facility Deveselu — last year, installing both a commanding officer and a small security complement.

Roughly 200 military, civilian employees and contractors will work at the missile site once construction is complete, said a spokesman for Navy Region Europe, Africa, Southwest Asia. The Romanian air force will still maintain control over the air base.