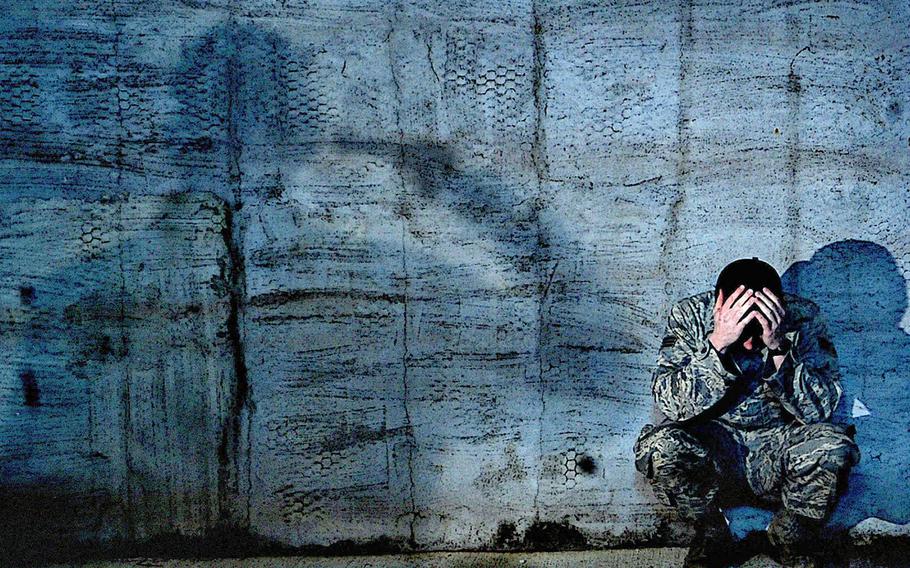 A 2009 public service poster designed to raise awareness about stress-related causes of suicide amongst U.S. servicemembers. The Veterans Crisis line can be reached at 1-800-273-8255. (Illustration by Corey Hook/Courtesy of the U.S. Air Force)

CAMP FOSTER, Okinawa – The U.S. military’s highest appeals court on Monday rejected the conviction of an Okinawa Marine for attempting suicide, but the decision may fall short of setting a precedent for all such prosecutions.

The U.S. Court of Appeals for the Armed Forces ruled that Pvt. Lazzaric Caldwell was improperly charged and convicted of disrupting order and discrediting the Marine Corps after he slashed his wrists in his Camp Schwab barracks in 2010. Caldwell, who had been diagnosed with post-traumatic stress disorder unrelated to combat, was confined to the brig for six months and received a bad-conduct discharge.

The Marine’s prosecution raised concerns at a time when the military is emerging from over a decade of wars and struggling with high rates of PTSD and suicide in the ranks. However, Caldwell defense attorney Lt. Mike Hanzel said the appeals court decision was specific to the case and does not prevent prosecution of other suicides by the military.

“They decided in Pvt. Caldwell’s favor but on more narrow grounds than they could have,” Hanzel said.

A court martial and lower appeals court accepted Caldwell’s initial guilty plea and found that he had disrupted other Marines in his unit who gave emergency care and had brought discredit on the service through the attempted suicide. The defense argued that Caldwell suffered from PTSD, depression and brain seizures, and was wrongly allowed to plead guilty and convicted without a psychological evaluation.

In its decision released Monday, the Court of Appeals for the Armed Forces found that exposing a fellow gunnery sergeant and corpsman to his blood and the unit’s use of medical supplies for treatment was not enough to prove Caldwell’s suicide affected good order and discipline in the Marine Corps, despite the prior conviction and rulings.

“The gunnery sergeant and medically trained corpsman administered first aid, as they would have in response to any other injury,” according to the written decision. “If the expenditure of medical resources alone undermined good order and discipline, then every bona fide suicide attempt requiring medical attention would be per se prejudicial to good order and discipline and on that basis alone could be subject to prosecution.”

The court also found no justification for charges that Caldwell’s suicide brought discredit to the service by making it appear the unit’s leaders had failed to keep the Marines in check.

“If this alone were discrediting, then it would appear to be discrediting for the whistle-blower to disclose fraud or the victim of an offense to report a crime by a member of the military,” the court said.

Still, the appeals court said it has upheld the prosecution of attempted suicides in other cases including a servicemember who shot himself in the shoulder during the first Iraq war and one who slashed his wrist in front of other inmates while confined in the 1960s. The Caldwell decision does not set a precedent for other suicide cases, the court said.

The Caldwell case will now be returned to the Navy and Marine Corps Court of Criminal Appeals for a reassessment following CAAF’s decision to overturn the lower court, Hanzel said.

The reassessment may result in the bad conduct discharge being lifted from Caldwell’s record, though the Marine will not be able to get back his six months of imprisonment, Hanzel said.

“I think he will be very pleased with the outcome,” said Hanzel, who had not yet shared the ruling with Caldwell late Monday. “I think for him it really was about the rights of people with mental illness ... and how they are treated by the military and society.”