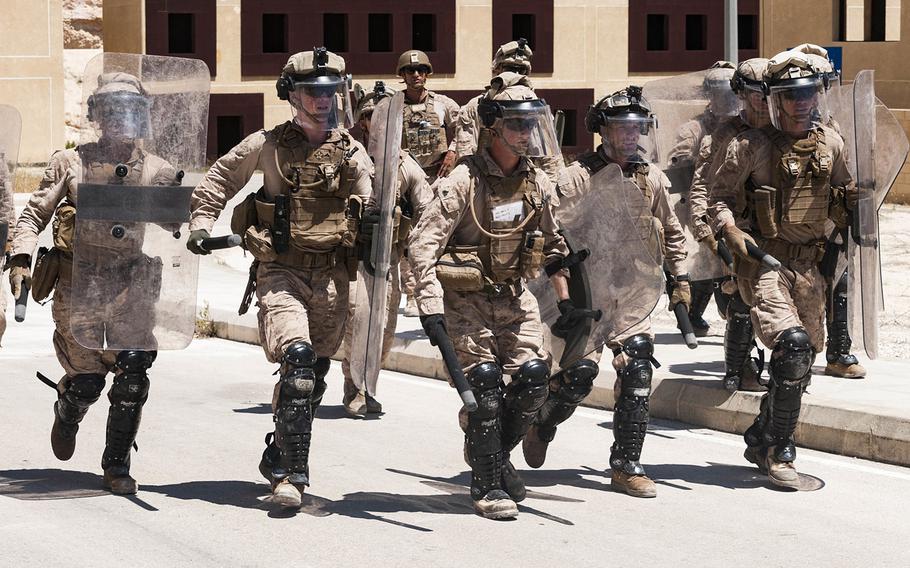 The controversial move Monday of the U.S. embassy to Jerusalem sparked bloody clashes between Palestinian protestors and Israeli forces along Gaza’s border. Israelis and Palestinians both claim Jerusalem as their capital. The Associated Press reported more than 50 Palestinians were fatally shot by Israeli soldiers and some 2,400 others were wounded in the exchanges, which included firebombs lobbed at Israeli troops by protestors.

Rebarich said the Pentagon could not say how many Marines were deployed or to which embassies, citing security concerns. The Marines were deployed from the Marine Security Guard Augmentation Unit from Quantico, Va., a unit designed specifically to respond to such security threats worldwide at the State Department’s request, a Marine official said.

NBC News reported the additional Marines were sent to embassies in Israel, Jordan and Turkey, citing five unnamed defense officials. They reported only modest increases of more than 10 but less than several dozen Marines at each location, according to three of the unnamed officials.

The Department of Defense “takes necessary steps to mitigate threats to U.S. personnel, embassies and consulates around the world,” Rebarich said. “… Augmentation is conducted regularly when a diplomatic post faces a heightened threat environment.”

The Pentagon bolstered its embassies in some Middle Eastern countries with additional Marines in December following President Donald Trump’s announcement of the impending embassy move in Israel. Some clashes occurred following the announcement, but none as violent as those on Monday.

In the event a U.S. embassy or consulate were to come under the threat of attack, Marine Fleet Anti-Terrorism Security Teams, known as FAST companies, would be deployed to respond, according to the Marine Corps. The teams are designed to prevent or react to an overrun of U.S. government assets and protect employees and property. FAST units typically deploy as platoons of about 50 Marines.

After the 2012 Benghazi consulate attack, for instance, a FAST unit was sent to guard the U.S. embassy in Libya.