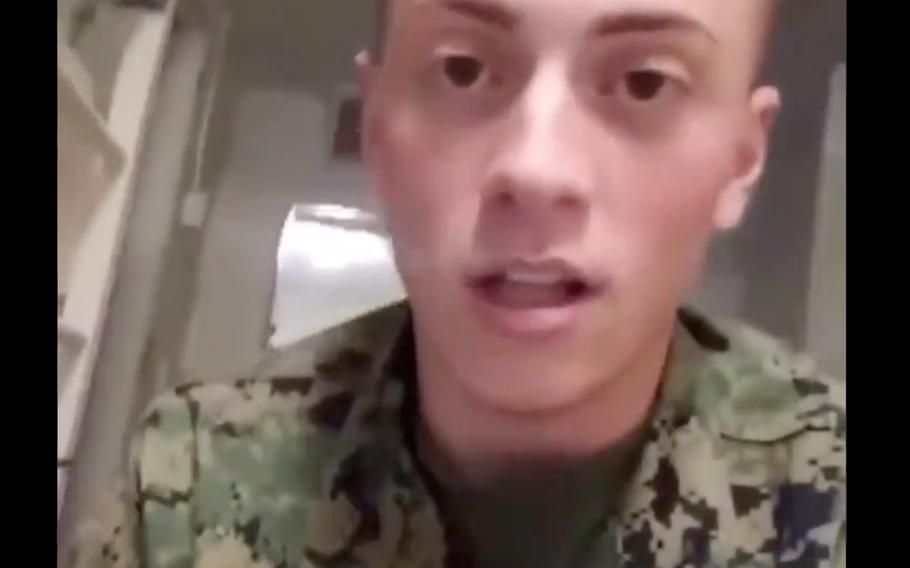 A Marine Corps spokesman identified the Marine in a video with racist content and threats of violence as Pfc. Jarrett Morford, (Twitter)

WASHINGTON — A Marine who posted a video online in which he uses slurs against Chinese people and threatens to shoot them when he deploys with the fleet is now under investigation, the Marine Corps said Thursday.

Morford, who is from Windsor, Colo., is now training for a communications job at Twentynine Palms, Calif. He graduated boot camp in August.

“There is no place for racism in the Marine Corps. Those who can’t value the contributions of others, regardless of background, are destructive to our culture and do not represent our core values,” Butterfield said.

“As the honorable Trump said today on Twitter, it was China’s fault,” Morford said in the video. “China is going to pay for what they have done to this country and the world.”

It was not clear Thursday which tweet Morford was referencing. President Donald Trump frequently tweets about China, blaming them for the coronavirus pandemic, which he has called “the China virus.”

It was also unclear Thursday when or where the video originally was posted. But it went viral Thursday on Twitter and Instagram.

The video also included profanity and referenced the caliber of bullet used for the M4 and the M16, the standard rifles issued to Marines.

In recent months, the military has taken steps to encourage troops to speak openly about diversity and discrimination within the ranks amid a national conversation on race. Leaders have taken small, but important, steps to reckon with racism within the ranks, including when Defense Secretary Mark Esper banned the Confederate battle flag from bases.

In September, the Army suspended 2nd Lt. Nathan Freihofer from his duties at Fort Stewart, Ga., and launched an investigation into a post he made on TikTok. In the short video, Freihofer said he would never become a “verified” user because of the content that he shares, before telling his so-called joke about the Holocaust and Jewish people.

U.S. troops are barred from downloading the Chinese-owned TikTok application on government-owned phones, but they are still permitted to access it on their personal devices.