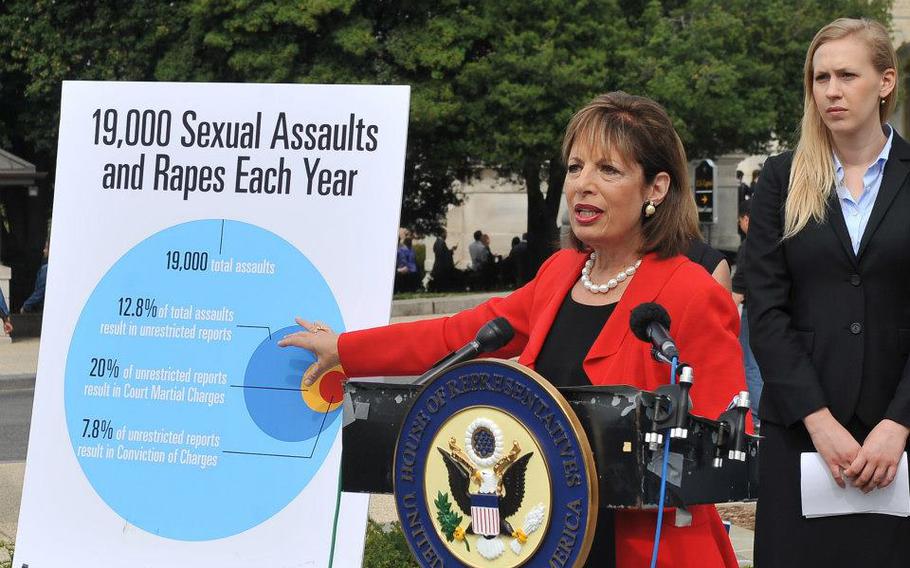 Rep. Jackie Speier, D-Calif., speaks at the U.S. Capitol, April 17, 2013, next to a graphic that says there are an estimated 19,000 rapes and sexual assaults in the military each year. (Congresswoman Jackie Speier/Facebook)

WASHINGTON — Amid a burgeoning scandal over the military’s halting efforts to eliminate sexual assaults within its ranks, a series of demeaning and offensive Facebook pages produced by members of the Marine Corps is now coming under scrutiny.

After a congresswoman sent a letter to Defense Secretary Chuck Hagel to alert him to the derogatory Facebook pages — including one that depicts a female Marine putting a male Marine in a choke hold with the caption “This is my rape face” — the Marine Corps is warning Marines to watch what they post online.

“Marines must use their best judgment at all times and avoid inappropriate behavior that could bring discredit upon themselves, their unit and the Marine Corps,” Capt. Eric Flanagan, a Marine spokesman, said in a written statement. “This includes posting any defamatory, libelous, abusive, threatening, racially or ethnically hateful or otherwise offensive of illegal content.”

Rep. Jackie Speier, D-Calif., first learned about the pages on Tuesday from a former Marine. Wednesday, she sent a letter to Hagel, Commandant Gen. James Amos and DOD Principal Deputy Inspector General Lynne Halbrooks to bring their attention to the page, “F’N Wook.”

The page, which is no longer available, had as its cover photo a bare-breasted woman holding her hands in front of her nipples, with middle fingers raised. The page contained several photos with captions designed to look like Internet memes.

Another page uses as its profile photo a shot of two female Marines with the caption “Coming soon to a unit near you, Combat Action Mattress.” In another, a woman is tied up and gagged, wearing only a garter belt, thigh-high stockings and high heels. The caption reads, “I left the kitchen once.”

More than 10,000 people had “liked” the page, and many photos had several hundred comments.

“Many of the pictures imply women only advance professionally by performing sexual favors and otherwise promote the idea that women are inferior and only useful as sexual objects and sandwich makers,” Speier wrote in her letter, also naming pages like “Just the Tip, of the Spear,” and “U Suckers Missed Christmas – USMC” as contributors “to a culture that permits and seems to encourage sexual assault and abuse.”

“The military cannot eradicate [sexual assault] without fundamentally changing its approach, including its tolerance of participation in these kinds of web sites,” she wrote.

Flanagan said there is evidence that active-duty and reserve Marines were involved in posting on the pages, and that all those instances have been referred to the Marines’ commanders “for appropriate action.”

While not naming the pages, Flanagan said the Marine Corps’ Inspector General’s office monitors complaints, “but not necessarily the web sites themselves.”

Flanagan said the Marine Corps has been dealing with complaints about social media “over the past 10 years,” and does not tolerate discrimination.

Last year, Sgt. Gary Stein was discharged from the Marine Corps after posting negative statements about President Barack Obama on Facebook — including that he is “religious enemy” and the “domestic enemy” and that he would not follow all orders from him.

The sites Speier mentioned in her letter do not have a name publicly attached to them. One posted a message threatening to attack Speier and her husband “free of charge” if she had the page deleted.

Flanagan said the Marine Corps has notified social media sites about posts “on several occasions,” but said it can be difficult to identify the people responsible for offensive material because of pseudonyms.

“Social media sites are not obligated to divulge personal information to the Marine Corps,” Flanagan said.