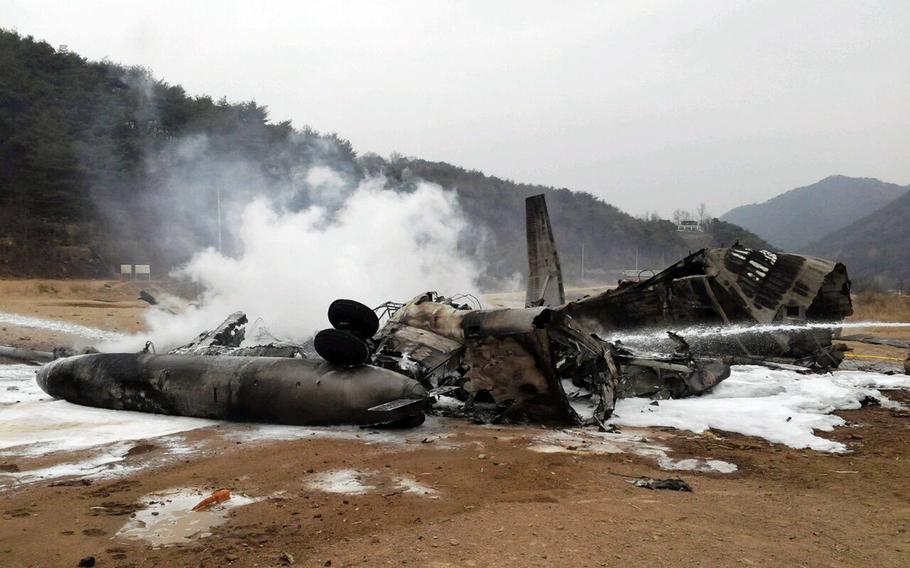 The wreckage of a U.S. Marine helicopter CH-53E Super Stallion helicopter smolders after it made a "hard landing" during an exercise called SsangYong, a Korean Marine Exchange Program and part of the Foal Eagle exercise in Chulwon, north of Seoul, South Korea, Tuesday, April 16, 2013. (AP Photo/Yonhap)

SEOUL — The potential presence of radioactive material has complicated the investigation into Tuesday’s crash of a U.S. Marine helicopter that injured 21 American servicemembers, but officials say there is no reason for alarm.

The CH-53E that crashed and eventually burned — in what U.S. military officials termed a “hard landing” — was equipped with a rotor safety device and an ice detector that contain a low-level radioactive isotope, Strontium-90, a Marine release said.

“In the event that the sensors were consumed in the fire, there is no risk to humans,” according to the release. “This amount of Strontium-90 in each sensor equates to an exposure much less than a normal chest X-ray.

“If the sensors are found at the site, they will be removed according to established environmental protocols,” it said.

The CH-53E Super Stallion helicopter was participating on ongoing U.S.-South Korean military exercises, called Foal Eagle, when it went down Tuesday afternoon close to the Demilitarized Zone, near the Jipo-ri Range and the border town of Cheolwon. While U.S. military officials say the incident is under investigation, a Cheolwon firefighter said initial indications were that a gust of wind may have caused the accident as the helicopter was about to land.

South Korean officials said that after the 21 U.S. servicemembers aboard were evacuated, the helicopter caught fire and “burned into ashes.”

The injured – including a five-person crew from the 31st Marine Expeditionary Unit stationed in Okinawa, Japan – were all taken to the U.S. military hospital at Yongsan Garrison in Seoul.

An aviation accident board has arrived in South Korea and begun its investigation, the release said, and aircraft recovery and site reclamation activities will begin following the completion of the investigation.

The release said the site of the accident “is a remote location, far from populated areas. Although the site poses no immediate threat to health, site cleanup will remain a priority. We take our environmental responsibilities seriously.”

Once the investigation is complete, the release said, “Any required changes to procedures or training will be incorporated. We will also review the aircraft systems and determine if there are any material changes that are warranted and develop and implement those changes.”

“These reviews highlight any changes that may need to be made and increase the safety of our operations,” it said.

Stars and Stripes' Yoo Kyong Chang contributed to this report.