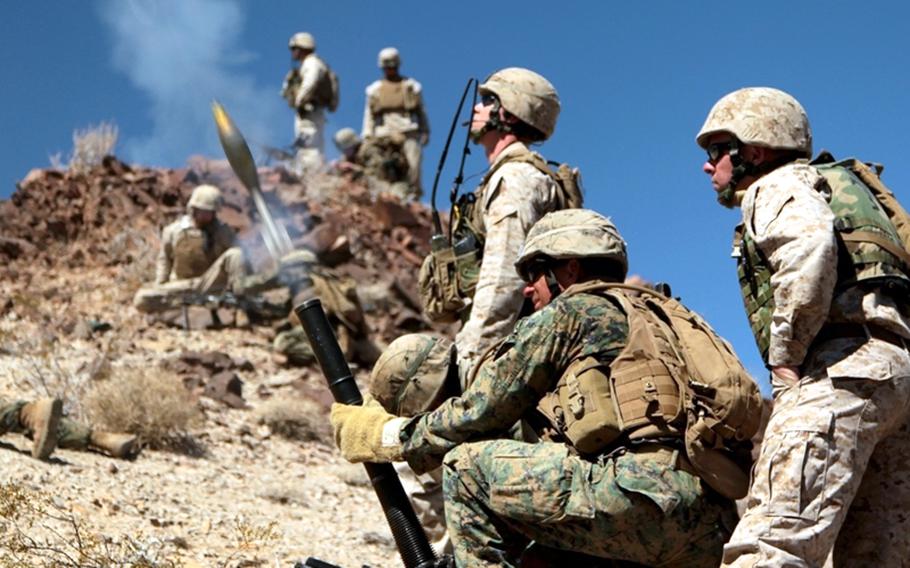 Students at the Infantry Officers’ Course fire a mortar round during a mountain attack in the Bullion Training Area at Twentynine Palms, Calif., March 21, 2012. (USMC)

She is receiving treatment and is in &ldquo;good condition,&rdquo; Flanagan said, though the Marine Corps is not releasing specifics about her medical condition or any identifying information about either of the women.

The Corps decided earlier this year to allow female lieutenants to attend its school for infantry officers as part of a larger effort to gather data on how to expand the role of women in combat. Male infantry officers must complete the 10-week course after graduating from The Basic School.

In addition to allowing women to volunteer for IOC, the Marines will allow enlisted women to volunteer to train with the infantry training battalion for research purposes. The Corps will give men and women volunteers a strength test to see how they respond to heavy machine gun lift, casualty evacuation and &ldquo;march under load&rdquo; assessments, according to a service-wide message released in April.

As part of the assessment process, the Marine Corps will assign some active-duty female officers and high-ranking enlisted female Marines to certain jobs in combat-related battalions for the first time. The units include artillery, tank, combat engineer, combat assault, low altitude air defense and assault amphibious battalions, are all in the women&rsquo;s existing specialties. Female Navy medical officers, chaplains and corpsmen now may also be assigned to those battalions.

Marine Corps Commandant Gen. James Amos will use the information gathered in the test programs and initiatives to make recommendations about how to change the policies that currently bar women from combat.