The traditional Marine Corps birthday festivities, such as cutting a cake and the presentation of colors, will look different this year amid the coronavirus pandemic. (Juan Bustos/U.S. Marine Corps)

The traditional Marine Corps birthday festivities, such as cutting a cake and the presentation of colors, will look different this year amid the coronavirus pandemic. (Juan Bustos/U.S. Marine Corps) 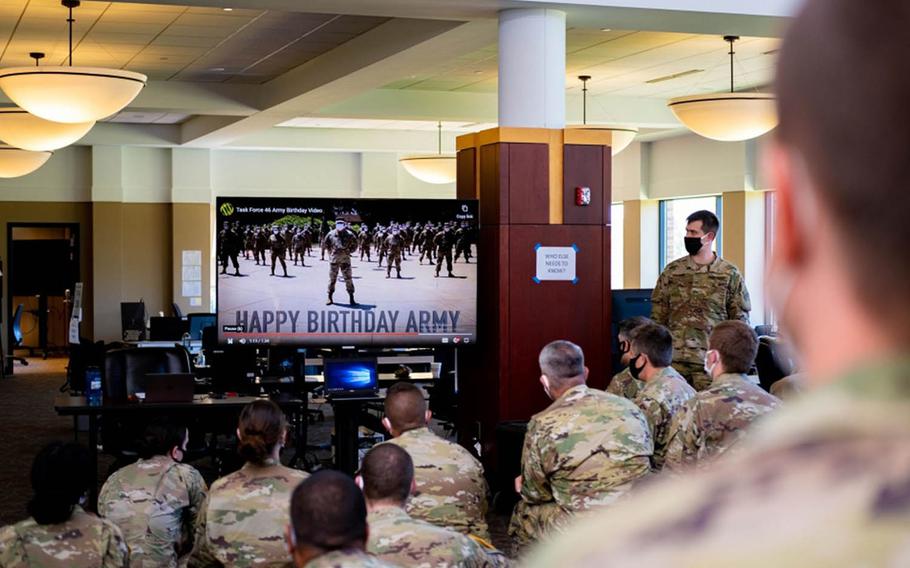 A typical Marine Corps birthday ball is a lively gathering involving dancing, presenting the colors and cutting a cake with a sword.

But this year, the ball itself is canceled at many Marine Corps commands. Instead, the ceremonies associated with the event will be viewed from computers, TVs or smartphones as the Marine Corps puts public health ahead of tradition for its 245th birthday on Tuesday.

“The COVID-19 pandemic prevents us from celebrating our birthday with the customary birthday ball,” Capt. Pawel Puczko, spokesman for the III Marine Expeditionary Force on Okinawa, said in an email Tuesday to Stars and Stripes. COVID-19 is the respiratory disease caused by the coronavirus.

“As Marines, we have adapted to the current environment,” he said.

Members of III MEF will watch a pre-recording of their commander, Lt. Gen. Stacy H. Clardy, cutting the cake, Puczko said. The recording will also feature messages from commanders to Marines across the III MEF subordinate commands.

While watching the recording, each unit will also host its own small ceremony while enforcing social distancing, Puckzo said.

“Traditions are deeply rooted into the history and legacy of the Marine Corps,” he said. “We will always take the time to celebrate our birthday, wherever we are and no matter the circumstances.”

The Air Force took a less conventional approach to its birthday celebration this year as well. Whiteman Air Force Base, Mo., had a drive-in ball for the service’s 73rd anniversary Sept. 18, according to the base’s website.

The installation, home of the 509th Bomb Wing, invited attendees to watch a ceremony and the posting of the colors from their cars and served sparkling cider in lieu of alcohol.

In the Pacific region, Air Force bases in Japan held virtual ceremonies and small unit-by-unit functions instead of the annual ball, according to base websites and Facebook pages.

The Army took a similar approach for its 245th birthday in June by linking soldiers to virtual events broadcast from Arlington National Cemetery on Facebook, Twitter and YouTube, according to the Army’s official website.

The ceremony included wreath layings and speeches from Secretary of the Army Ryan McCarthy, Chief of Staff of the Army Gen. James McConville and Sgt. Maj. of the Army Michael A. Grinston.

Forgoing the large celebrations each branch looks forward to may be disappointing, Puckzo said, but public safety has priority over tradition in the midst of a pandemic.

“Every Marine will have the opportunity to honor our birthday while ensuring the health and readiness of our force,” he said.