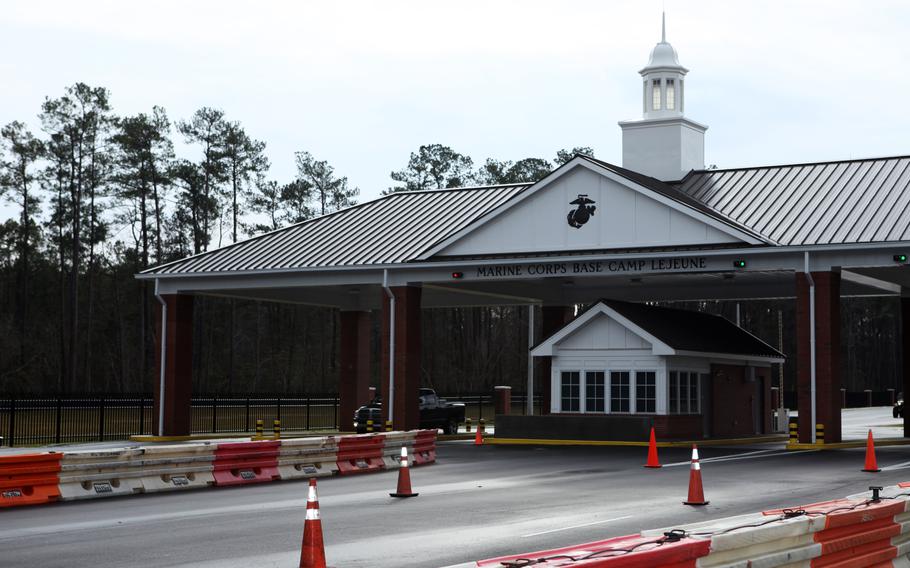 The Marine Corps Base Camp Lejeune Main Gate Access Control Complex is shown on January 24, 2012. In the early 1980s, the Marine Corps discovered Camp Lejeune had two water wells contaminated with cleaning solvents such as trichloroethylene, or TCE, and perchloroethylene, widely known as PCE. The latter was used by an off-base dry cleaner, ABC One-Hour Cleaners. The business closed down in 2011, according to the U.S. Environmental Protection Agency. (Damany S. Coleman/U.S. Marine Corps)

WASHINGTON — The day President Joe Biden signed into law a bill to expand health care and benefits for veterans exposed to burn pits and other toxins, Marine veteran Jerry Ensminger filed one of the first lawsuits for water contamination at a Marine base that he believes caused his daughter’s death.

Ensminger served in the Marines for over 24 years, retiring as a master sergeant. He and his wife had four children but only one, daughter Janey, was conceived when the family lived on Camp Lejeune in Jacksonville, N.C., from 1972 to 1975.

Janey, born in July 1976, was diagnosed with leukemia when she was 6 years old. She died of the disease three years later.

“To watch your child go through hell and you're going through hell with them, and to watch them die a little bit at a time for over two years before they finally passed,” Ensminger said. “It's the worst thing that could ever happen to a parent.”

The law, known as the PACT Act, seeks to provide an easier path to health care and benefits for veterans who served near open-air burn pits, which were used throughout the 1990s and the post-9/11 wars to burn garbage, jet fuel and other materials.

Included in the PACT Act is the Camp Lejeune Justice Act of 2022, which will allow veterans, families and other individuals who worked or lived for at least 30 days on the base from Aug. 1, 1953, to Dec. 31, 1987, to sue for harm and exposure to contaminated water.

“As soon as Biden's hand starts to move to sign, [the lawyers] are hitting send and my case for Janey is going to be the first one,” Ensminger said several days before the bill was signed Aug. 10.

In the early 1980s, the Marine Corps discovered Camp Lejeune had two water wells contaminated with cleaning solvents such as trichloroethylene, or TCE, and perchloroethylene, widely known as PCE. The latter was used by an off-base dry cleaner, ABC One-Hour Cleaners. The business closed down in 2011, according to the U.S. Environmental Protection Agency.

As for the TCE contamination, the National Library of Medicine reported multiple sources such as on-base spills and underground storage tank leaks at dumps and storage lots contributed to the contamination. Marine Corps veteran Jerry Ensminger’s daughter, Janey, was diagnosed with leukemia when she was six years old. She died when she was nine in 1985. Ensminger said Janey was conceived when he and his family lived on Camp Lejeune from 1972 to 1975. Janey was born in July 1976. “To watch your child go through hell and you’re going through hell with them, and to watch them die a little bit at a time for over two years before they finally passed,” Ensminger said. “It’s the worst thing that could ever happen to a parent.” (Courtesy of Tied to the Track Films)

Ensminger first began his fight for justice for his daughter in 1997, three years after he retired from the Marine Corps. He learned about the water contamination on the local news and how the contamination was linked to birth defects and childhood cancers.

“I’ve been fighting this issue longer right now than when I served as a Marine,” Ensminger said. “[August] is 25 years.”

The documentary “Semper Fi: Always Faithful,” found that the Marine Corps uploaded documents indicating it knew of the contamination for more than 30 years.

‘Mike has been my brain’

Mike Partain first heard about the water contamination after watching Ensminger being interviewed about it a year after his diagnosis.

Partain was born in January 1968 at Camp Lejeune when his father was a Marine officer.

Partain was diagnosed with stage two male breast cancer in 2007 at the age of 39. His right breast was removed along with a lymph node under his right arm. He also had to go through eight rounds of chemotherapy.

“You got to remember too, that, in the case of Janey, for the first part of gestation, and also for me throughout my entire gestation, you were exposed in utero, meaning that their most critical part of your life where everything needs to go right, we're getting inundated with these chemicals in the drinking water through our mothers,” Partain said. “And that has much more weight on exposure than an adult or even a child.”

From there, both men began the long fight to hold the Marine Corps and the Navy accountable. Partain, an insurance claims adjuster and a historian, created a timeline of the Camp Lejeune exposure, dating back to the 1940s. Pertain even wrote his master’s thesis on the issue.

Ensminger and Partain submitted their claims for compensation to the Navy in October 2002 and February 2009, according to their lawsuits. The claims were denied.

“I'm looking forward to going into a federal courtroom with a jury,” Ensminger said. “I want to lay all this out in court and then the American people can make their own decisions if they want their loved ones serving somebody that doesn't give a rat's ass about what they do to them while they're in the service.”

“[Marine Corps] don't deserve to have the immunities that they got,” Ensminger said. “And they need to be held accountable.”

AboutLawsuits.com, an information and news legal website, reported more than one million Marines and their families lived on Camp Lejeune from 1953 to 1957. The legal site also estimated tens of thousands of lawsuits are expected to be submitted after Biden signed the PACT Act.

AboutLawsuits.com also reported Camp Lejeune’s contaminated water could be responsible for more than “50,000 cases of breast cancer, 28,000 cases of bladder cancer, 24,000 cases of renal cancer, as well as thousands of cases involving Parkinson’s disease, birth defects and other health complications.”

“The first step is to file an administrative claim form with the Department of Navy, thereby providing notice of a claim against the federal government for injuries and/or death due to the water toxicity at Camp Lejeune,” the law firm said in a statement.

“Once filed, the government has 180 days to review the claim and can make an offer to settle the claim, deny the claim, or provide no response. If there is a denial or the time period of 6 months lapses, a claimant is then allowed to bring a lawsuit for monetary damage in the Eastern District of North Carolina.”

So far, 28 lawsuits have been filed, according to public records.

Ed Bell, an attorney and founder of Bell Legal Group, a personal injury law firm in Georgetown, S.C., said his firm submitted 3,000 claims to the Department of the Navy’s Office of the Judge Advocate General in the Washington Navy Yard on Aug. 10. The claims would grant them financial compensation for the exposure.