Family of fallen Marine claims they were disrespected by airline 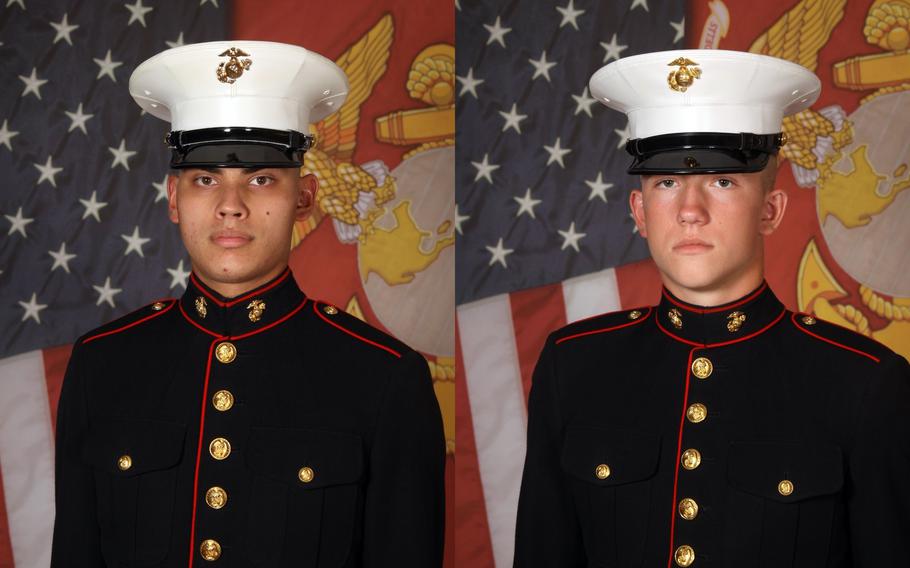 U.S. Marine Corps Lance Cpl. Jonathan E. Gierke, left, and Pfc. Zachary W. Riffle died in a tactical vehicle rollover Jan. 19, 2022, on a highway near Camp Lejeune, N.C. Riffle’s family claims they did not get to see his body deplane at the Pittsburgh International Airport during his journey home. (U.S. Marine Corps)

KINGWOOD, W. Va. (Tribune News Service) — The family of Pfc. Zachary "Zach " Riffle, a Marine killed in a military vehicle rollover Jan. 19, near Jacksonville, N.C., did not get to see his body deplane at the Pittsburgh International Airport during his journey home.

"The pain we suffer for his loss and our relief to get him home was vastly overshadowed yesterday by the lack of respect and disregard for our family and, for a portion of the trip, Zach's two assigned Marine escorts as well as Zach himself," Riffle's family wrote in an open letter to the CEO and incoming CEO of American Airlines, the airline that transported Riffle from North Carolina to Pittsburgh.

Zach was a high school athlete and was in the band in junior high. He left Preston High School early, enlisting in the Marines. He was a landing support specialist with Combat Logistics Battalion 24, Combat Logistics Regiment 2 and 2nd Marine Logistics Group.

In his obituary, his family wrote that Zach was a hard worker, always smiling and laughing, and was the life of the party. He collected knives and enjoyed dirt bike races, playing Xbox, fishing and helping family with construction work.

When the family arrived at the Pittsburgh International Airport, they were told policy changes were in place because of COVID and staff shortages, the letter states. They also learned the Marine Casualty Assistance Calls officers had to push for better accommodations for the family of four parents and four siblings.

"We cannot thank them enough for advocating for us and Zach," the letter said of the Casualty Assistance Calls Officers.

Their role, according to Maj. Jordan R. Cochran, is to support the survivors of fallen Marines, including accompanying families to witness planeside honors when their loved ones arrive at commercial airports.

"Escorts are responsible for the continuous accountability of the remains from the place of preparation to the place of final disposition," Cochran said. "These are solemn duties entrusted to selected members of our Corps."

The news that the family would not be allowed to see the plane land or view Zach's flag-draped casket until he was brought into a cargo terminal was "crushing to say the very least."

"In the moments that followed, we had to quickly accept that we were at the mercy of AA and would not see this sacred moment in person," the letter said.

A request that Riffle's escorts be allowed to record the moment was denied because of a concern of the footage being inappropriately disseminated by an airline employee, according to the letter. After the advocate asked a second time, explaining to the tarmac manager the family would sign liability waivers and was planning to publicly air their grievances, one of the Marine escorts was allowed to give his phone to an employee to record.

"COVID restrictions at the Pittsburgh International Airport were enforced by the Transportation Security Administration (TSA)," Corchran said. "As such, the Marine Corps had no influence over the family's ability to witness the planeside honors. This was unfortunate; however, the CACO continues to support the Riffle family during this trying time."

Additionally, the family was disappointed to learn during a roughly eight-hour layover in Charlotte, N.C., Riffle's Marine escorts, who could not leave his side, were not offered food as they waited with him in a cargo terminal. The escorts' luggage was also sent to baggage claim, causing them to have to leave without it — because they couldn't leave Riffle's side.

There was also no in-flight announcement that a fallen service member was being transported on the final flight from Charlotte to Pittsburgh. The letter said this has been done on previous flights and escorts were allowed to deplane first so they could take their positions.

Asked about the situation, an American Airlines spokesperson said, "We are committed to honoring our fallen heroes. We are sorry we fell short of the family's expectations and are reviewing the matter internally. A senior member of our team has reached out to Pfc. Zachary Riffle's family to express our condolences and hear more about their experience."

However, the Riffles' letter states there is nothing the airline can do to right this wrong.

"We will never have these moments back. We could not have imagined the disrespect that took place. There is nothing that can be done to remedy this for us," the letter said. "We hope airing these grievances in a very public manner will save another military family from suffering further mental anguish due to the inconsideration and disrespect of this airline."