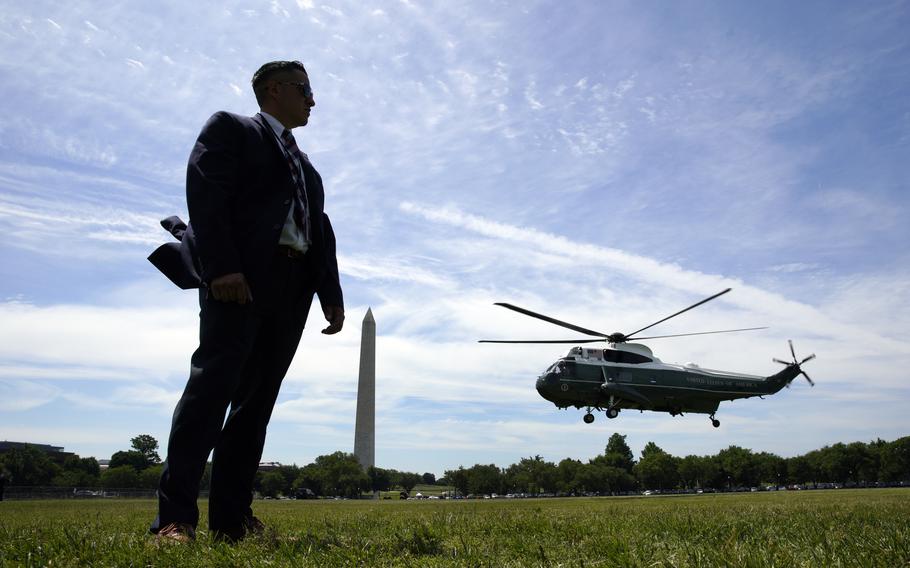 U.S. Secret Service stands guard as the Marine One helicopter, with President Joe Biden on board, departs the White House en route to Tulsa, Okla., from the Ellipse in Washington, D.C., on Tuesday, June 1, 2021. (Yuri Gripas, Abaca Press/TNs)

(Tribune News Service) — Joe Biden’s first flight on the new presidential helicopter built by Lockheed Martin Corp. is being delayed after a report by the Pentagon’s testing unit warned that it’s not yet “operationally suitable” or sufficiently reliable — especially in an emergency.

The Biden administration hasn’t yet determined if the helicopter can be put into operation because it’s still assessing its safety, according to a U.S. official who asked not to be identified discussing the internal deliberations. The White House Military Office will determine the timeline.

The helicopter is “failing to meet the reliability, availability or maintainability threshold requirements” set for it, according to an internal summary prepared for senior defense officials by the Pentagon testing office and obtained by Bloomberg News.

The VH-92 helicopter program is a $5 billion, 23-aircraft program to replace the current aging fleet used by the president and other top officials. The previously unpublished testing report, dated Sept. 28, said the aircraft is “operationally effective” for routine “administrative” missions like a run to Camp David or delivering the president to Joint Base Andrews outside Washington for a preplanned trip on Air Force One.

But it wasn’t effective “for the contingency operation mission,” a reference to emergency flights. The “Mission Communication System (MCS) often delayed critical communications at the beginning of contingency missions and did not adequately support timely, continuous and secure communications,” the test office found.

“The VH-92 report was marked CUI to protect critical technical information and operational security,” Captain Clay Doss, a Navy spokesman, said in a statement. “An unclassified/releasable synopsis will be included in” the Pentagon test office’s annual report, he said. That report is typically published in January.

With its emblematic “white top” paint job, Marine One — its designation when the president is on board — is almost as much a symbol of the American presidency as the Air Force One jetliner. Crowds of reporters and White House guests regularly gather to see the president depart and return aboard the helicopter. The current fleet entered duty in 1975, with a newer model added in 1989. Earlier plans for a replacement from Lockheed were canceled in 2009 after that program was plagued by soaring costs and schedule delays.

The Marines, in coordination with the White House Military Office, had planned to declare in July that the helicopter had an “Initial Operational Capability.” That already was a delay from June 2020 and then January. That designation would have been followed by the military office assigning missions. Neither has happened.

The Pentagon’s Director of Operational Test and Evaluation assessed the helicopter’s performance during three months of testing ending April 15. Marine Corps Major General Gregory Masiello, the program manager, told a Navy audience on Aug. 3 that “the squadron and the program are ready today.”

The Marine test squadron flew 18 sorties over 131 flight hours with scenarios inside and outside the National Capital Region, including to Camp David, to assess the chopper’s basic operational effectiveness and maintenance capability. Jessica Maxwell, a spokeswoman for the testing office, said in an email that the flight tests were designed to answer the question: Is it “effective and suitable to perform transport of the President, Vice President, cabinet members and heads of state?”

The test office declined to answer any questions about the results because they were deemed “controlled unclassified information,” Maxwell said.

In addition, the VH-92 program office still hasn’t solved the problem of the new helicopter potentially scorching the grass in the landing zone on the White House South Lawn. Spinning rotors and engine exhaust cause scorching in limited circumstances that first occurred in September 2018.

Megan Wasel, a spokeswoman for the program office said it “continues to work closely” with the Marine Corps and the White House Military Office “to execute a seamless transition from the current in-service” copter to the VH-92. Bethesda, Md.-based Lockheed has been provided the test report, Wasel said.

“The report did not raise any issues” that the program office and Marine Corps “were unaware of, or the issues were previously corrected,” said Major Jorge Hernandez, spokesman for the Marine aviation deputy commandant. The office “cannot speculate as to when” the White House will give approval to start missions, he said.

John Dorrian, a spokesman for Lockheed’s Sikorsky aircraft division, said “we are pleased our customer awarded us a contract for the final five production helicopters” in February. He said “Sikorsky continues to work closely with our customer to ensure the aircraft meets all operational requirements.”

The Navy placed the final batch of a total 23 production and test aircraft on contract on Feb. 5, three days before operational testing began. The service has already spent more than $1.5 billion on the program.