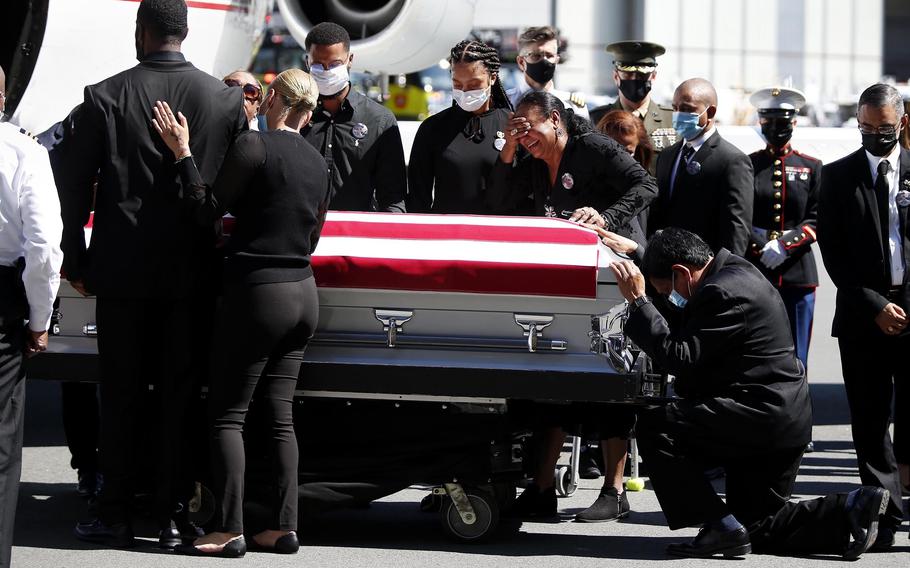 LAWRENCE, Mass. — The body of a U.S. Marine killed in a suicide bombing in Afghanistan returned home Saturday in a solemn procession through Massachusetts on the 20th anniversary of the attacks that led to America's longest war.

Sgt. Johanny Rosario Pichardo died in the Aug. 26 bombing near the Kabul airport where people were being evacuated amid the Taliban takeover of Afghanistan. A dozen other U.S. service members and 169 Afghans were killed as people struggled to get into the airport and on flights out of the country.

In Rosario Pichardo's hometown of Lawrence, people lined highway overpasses and streets waving American flags as the vehicle procession made its way through the city near the New Hampshire state line.

A Marine honor guard carried the flag-draped draped casket into the Farrah Funeral Home as police, firefighters and others stood and saluted. 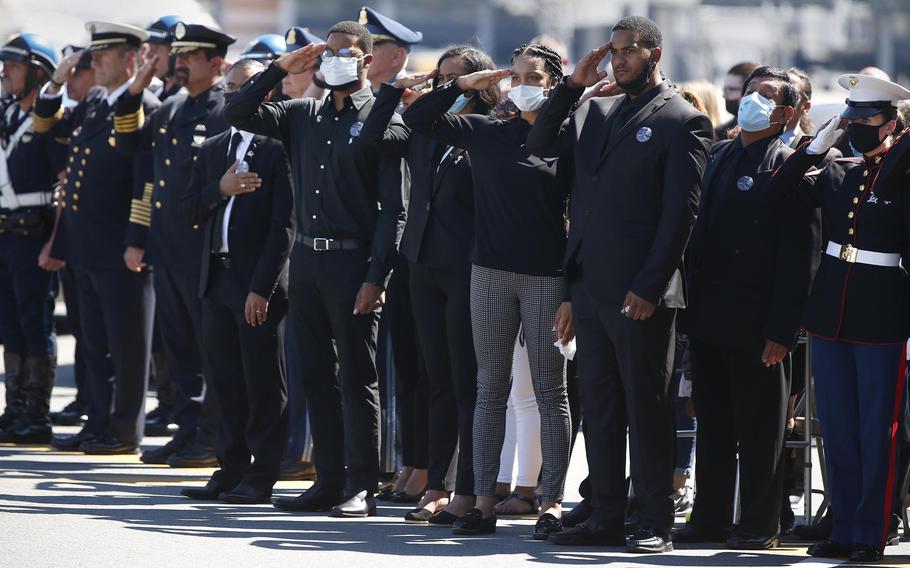 Military personnel and others salute as the body of Marine Sgt. Johanny Rosario Pichardo returns to Logan Airport in Boston on Saturday, Sept. 11, 2021. (Jonathan Wiggs, The Boston Globe/AP) 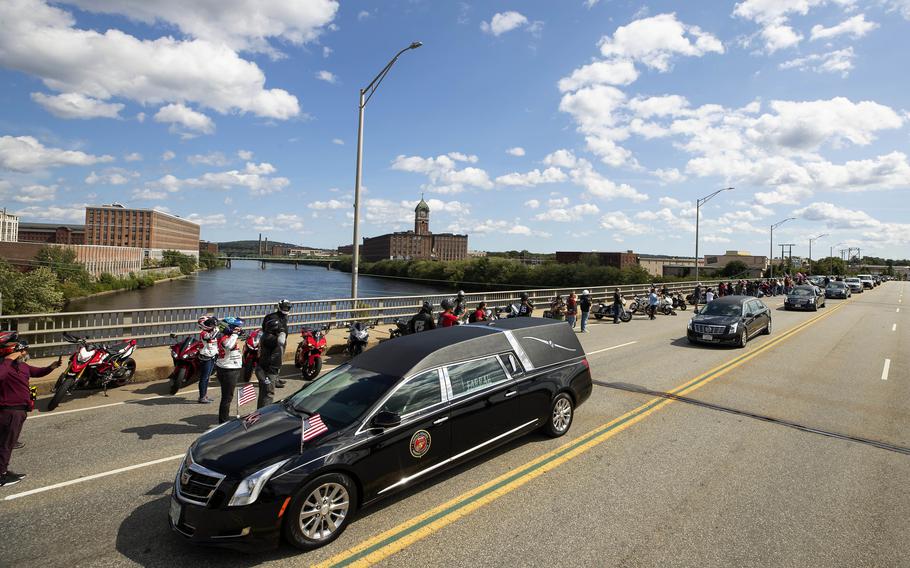 The hearse carrying the remains of U.S. Marine Sgt. Johanny Rosario Pichardo passes a line of bikers as it travels through her hometown of Lawrence, Mass. Saturday, Sept. 11, 2021. (Winslow Townson/AP) 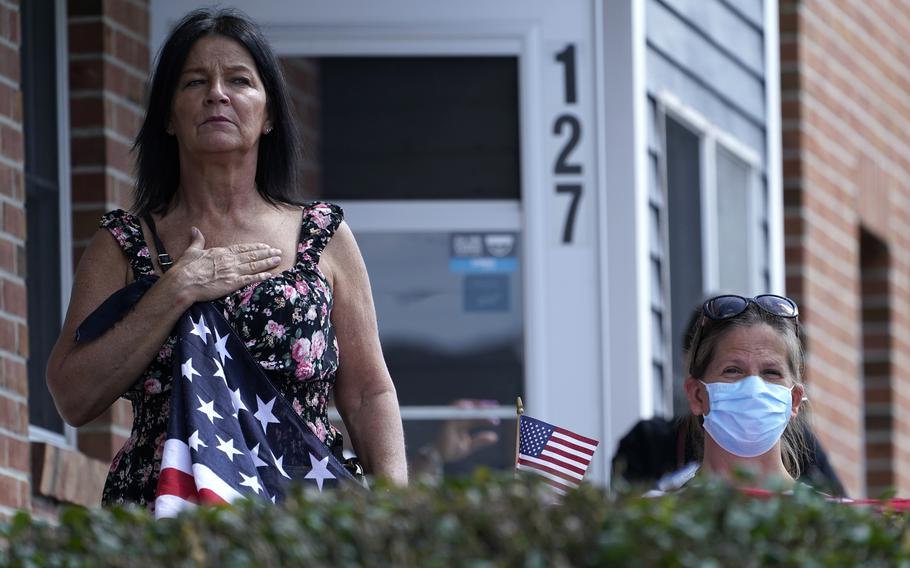 Residents watch the funeral procession for Sgt. Johanny Rosario Pichardo, a U.S. Marine who was among 13 service members killed in a suicide bombing in Afghanistan, in Lawrence, Mass, Saturday, Sept. 11, 2021. (Robert F. Bukaty/AP) 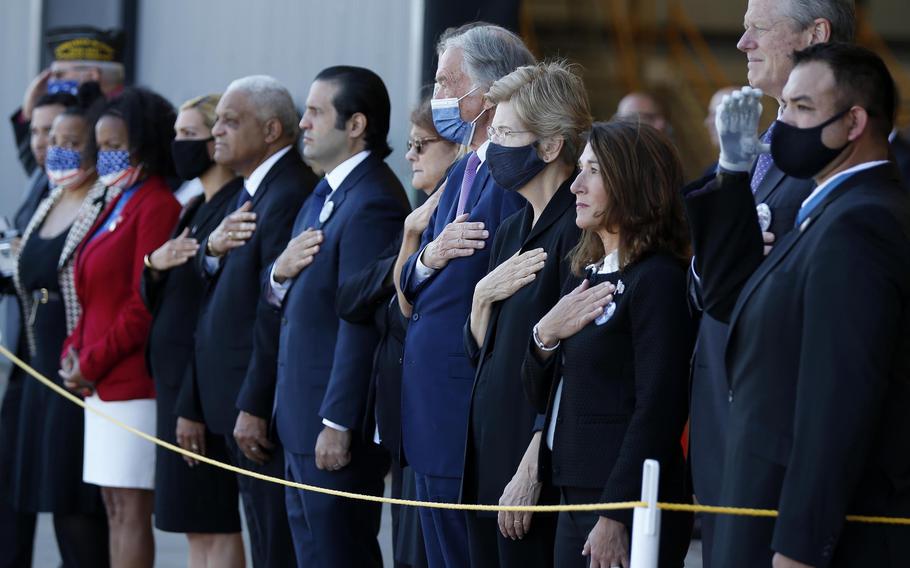 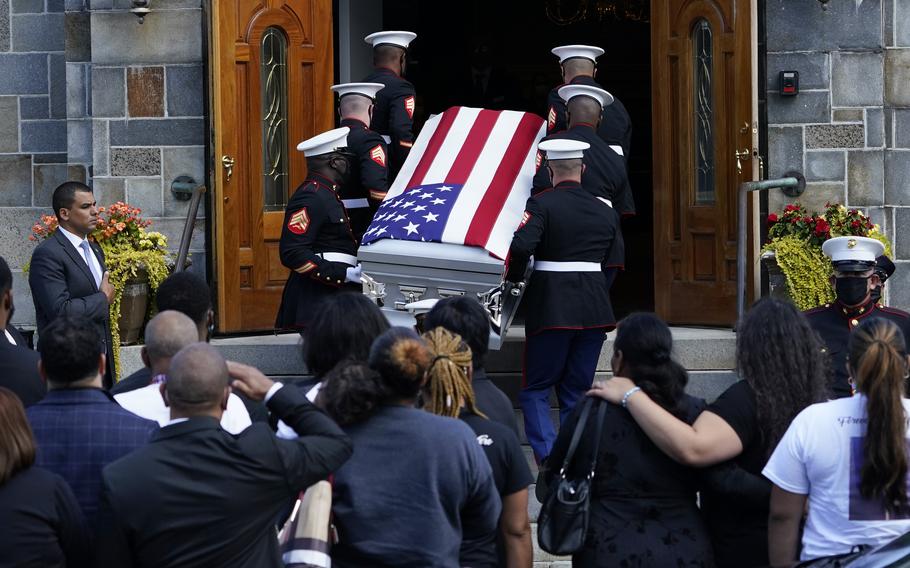 The casket of Sgt. Johanny Rosario Pichardo, a U.S. Marine who was among 13 service members killed in a suicide bombing in Afghanistan, is carried into the Farrah Funeral Home in her hometown of Lawrence, Mass, Saturday, Sept. 11, 2021. (Robert F. Bukaty/AP)

"We will never forget her name," Lawrence Mayor Kendrys Vasquez said afterward. "We are proud to have her home."

Francisco Urena, a former state veterans affairs commissioner who has been assisting Rosario's family, said the significance of the fallen soldier coming home on the anniversary of the attack that prompted the war that ultimately cost her life isn't lost on her family.

"You have to understand that Johanny was five, a kindergartner 20 years ago. She has lived in a country at war," he said. "She volunteered to serve our country and volunteered to be in that mission."

Saturday represents the true beginning of the the family's grieving, as many recently arrived from Rosario Pichardo's native Dominican Republic and elsewhere, Urena said.

"This has been a long time coming for this family. This has been very difficult days, sleepless nights," he said. "But the city of Lawrence came together to ensure that this young Marine sergeant and her family are not alone during this time."

The 25-year-old served with the Naval Amphibious Force, Task Force 51/5th Marine Expeditionary Brigade. She and other Marines were killed as they were helping to screen Afghans and others at the gate of the Kabul airport. They were all awarded the Purple Heart last week.

A funeral Mass will be held Monday morning at St. Mary's of the Assumption Church for Rosario Pichardo's family and other invited guests.

On Tuesday, there will be a public wake at Veterans Memorial Stadium next to Lawrence High School, where Rosario Pichardo graduated. She'll be laid to rest at Bellevue Cemetery in a section reserved for military veterans.