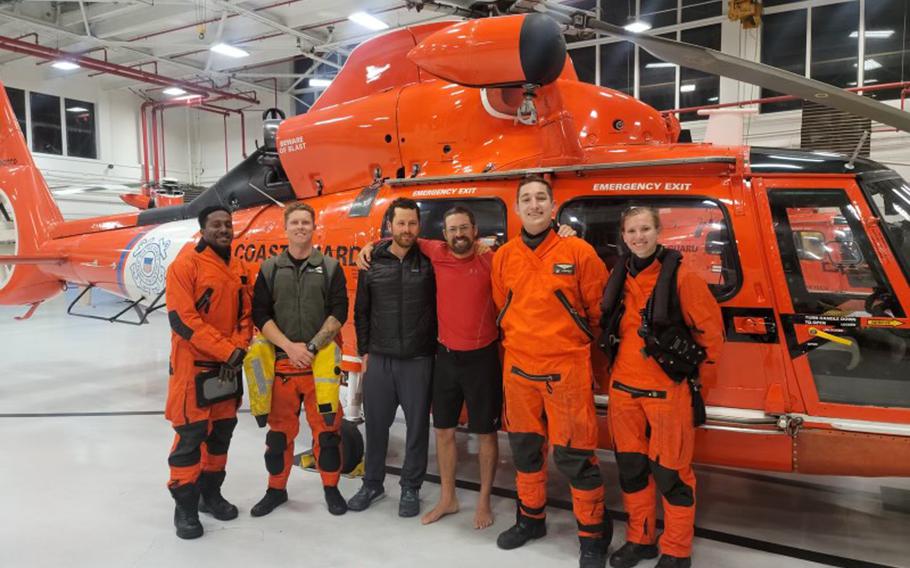 In this photo provided by the U.S. Coast Guard, kayaker Cyril Derreumaux, in shorts, poses with the Coast Guard helicopter crew that rescued him off the California coast in San Francisco on Saturday, June 5, 2021. (U.S. Coast Guard via AP)

SANTA CRUZ, Calif. — A kayaker hoping to paddle solo from California to Hawaii was rescued six days after he set out by a U.S. Coast Guard helicopter amid rough seas and high winds.

Cyril Derreumaux endured several problems with his 23-foot kayak, but when he lost his sea anchor he said he knew he had to cut his adventure short.

"It went from bad to worse very fast after that," he told the San Francisco Chronicle from his home in Larkspur, California.

After consulting with his land crew, Derreumaux phoned the Coast Guard for a rescue Saturday night about 70 miles west of Santa Cruz. A diver was lowered from a helicopter into the water and helped hoist Derreumaux up.

In addition to losing the anchor, the kayak's anchor lines had become entangled in the rudder, the GPS wasn't functioning properly and Derreumaux was seasick while pummeled with 12-foot waves.

Derreumaux's boat remains adrift in the ocean. He said he hopes to coordinate a retrieval effort this week when the winds die down.

"I made the right call," Derreumaux, 44, told the newspaper on Sunday. "It's still disappointing."

Derreumaux set out May 31 from Sausalito, California and expected the Pacific voyage to take about 70 days. He prepared for the trip for three years.