Military battling white supremacists within its own ranks 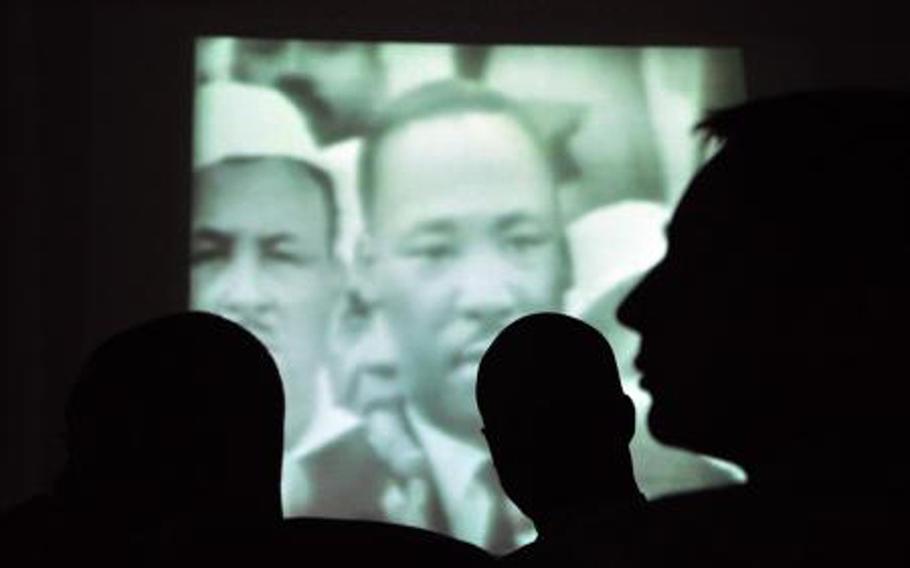 Soldiers watch a recording of Martin Luther King Jr.'s famous "I Have a Dream" speech at an observance at a U.S. base in Iraq in January 2010. The Pentagon has launched three major pushes in recent decades to crackdown on racist extremists, but the issue remains a problem, Reuters reports. (Matthew Cooley/DVIDS)

The number of white supremacists who have infiltrated the U.S. military is far greater than people realize, Reuters reports. The Pentagon has tried in recent years to crackdown on extremists, but the issue remains a problem.

While the challenge of keeping them out of the uniformed ranks dates back decades, the issue resurfaced recently following the Aug. 5 mass murder at a Sikh temple in southern Wisconsin. The shooter, Wade Page, was a former soldier known for his racist views who openly circulated in white supremacist circles.

Reuters said that, according to a former member of a skinhead group and a Marine veteran, Page and others with similar views are instructed by supremacist groups to join the Army or Marine Corps and absorb all that they can --- from learning how to shoot to working with C-4 explosives. Then, after acquiring military skills, followers are encouraged to get out of the service and prepare themselves for the coming race war.

The military's efforts to stem this fascist flow goes back decades, according to Reuters. In 1986, for example, Defense Secretary Casper Weinberger ordered military personnel to reject supremacist organizations. Ten years later, in the wake of the bombing of the Oklahoma City federal building by two former Army soldiers, the Pentagon banned its personnel from taking part in white supremacist causes.

As recently as 2009, the Pentagon issued another such cautionary warning, which came on the heels of a Department of Homeland Security report noting the tendency of right-wing extremists to recruit war veterans. However, an official with the Anti-Defamation League said in the Reuters article that the military's reaction to such alerts has been "patchy" at best.

Additonally, the Reuters report said the basic message of hate espoused by white supremacists has been adjusted to avoid detection, based on an Army presentation intended to educate soldiers about extremism within the ranks. Some of the more popular issues that white supremacists now exploit to cover their tracks range from threats to free speech to anti-gun legislation to tax reform, according to Reuters, again, citing the Army presentation.

The Army presentation cautions soldiers and leaders to look out for tattooed symbols, such as lightning bolts, eagles and Nordic warriors. Academics cited by Reuters said as the military adjusts and adapts to white supremacist groups, so too does the latter, encouraging recruits to grow their hair long when they approach military recruiters and to cover up any identifying marks, particularly tattoos.