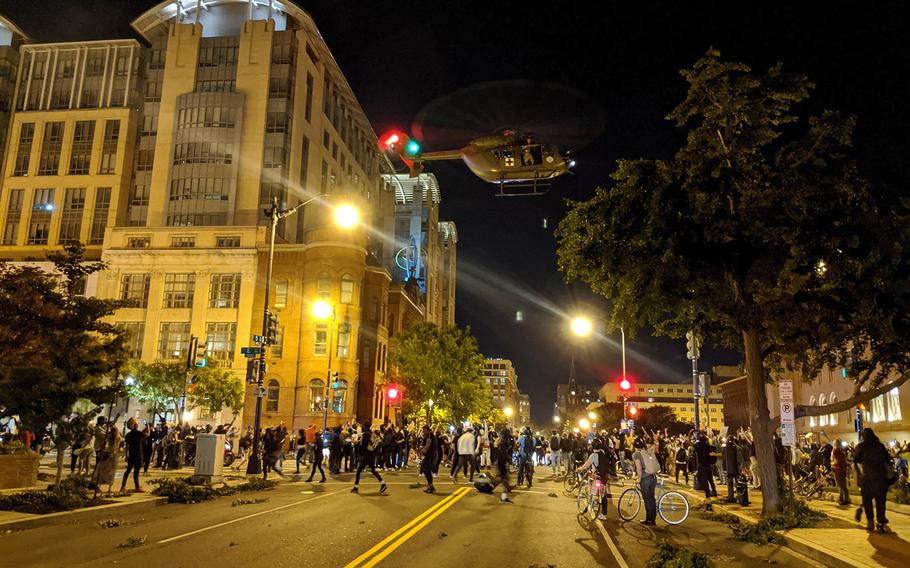 A Lakota helicopter from the D.C. Army National Guard hovers over an intersection in downtown Washington on June 1. (Washington Post photo courtesy of Sam Ward)

WASHINGTON — An Army investigation found procedural and performance failures that led to the use of medical helicopters during the civil unrest in the nation’s capital last summer, according to Army officials Wednesday.

Last summer, protests swept the country, including in Washington, after the May 25 death of George Floyd in Minneapolis while he was being arrested. On June 1, five District of Columbia Army National Guard helicopters were sent to where protesters were gathering near the Capitol to prevent looting and violence, according to Army officials who spoke Wednesday on the condition of anonymity.

Videos on social media from the night showed a Lakota helicopter with a Red Cross emblem on its side hovering low above the protesters, with its downward rotor wash causing debris to be kicked up, The Washington Post reported at the time.

The 26-page redacted command investigation by the District of Columbia Army National Guard was completed June 30, 2020, but was not released until Wednesday, nearly 10 months later, due to additional “oversight actions” taken by the Army into the incident, according to the Army officials.

The National Guard command investigation found that Brig. Gen. Robert Ryan, commander of the Joint Task Force-District of Columbia that oversees operations to support civilian authorities, did not direct the aircraft to be used to disperse crowds or conduct low hovers. The intent of the mission was “misunderstood or modified” by an unnamed official, who included crowd dispersal in the mission to subordinates, the report states.

While the aircrew members “acted in good faith” based on the mission as they understood it, the command investigation found that there was a breakdown in the command and control of the mission and lack of understanding of how to use the medical helicopters during civil disturbance operations, according to officials.

The Vice Chief of Staff of the Army, Gen. Joseph Martin, has or will take appropriate administrative actions against a “number of individuals” involved in the incident to include corrective and disciplinary actions based on performance failures, not misconduct, according to an official. The officials would not provide any more information regarding how many people had actions taken against them or what the nature of those actions were, citing privacy concerns.

On June 1, Ryan had decided to launch all available D.C. Army National Guard helicopters to “show a military presence and do observation and control [and] interagency support,” according to the investigation. An unnamed official had informed him that the aircraft had been cleared to fly in Washington, the report states. Ryan stated he was unaware of needing a waiver to use medical helicopters outside for their original purpose.

The investigator also wrote in the report that it “appeared” Ryan believed the fact that they were medical helicopters was “irrelevant” due to the mission he was given and the circumstances of the events occurring in D.C.

One of the Lakotas hovered below 100 feet above a crowd from the ground, and the pilot stated in the report that he did so because “we were told to find the crowds, fly low over them, provide that constant obvious presence as hopefully a deterrent.”

Two of the five helicopters dispatched that night were flying with a Red Cross emblem, which is a regulated symbol to only be used on aircraft meant for medical and humanitarian purposes. Two other medical helicopters were not marked with the emblem when they were required to, according to the report. The fifth helicopter was a “security and support” aircraft that was equipped with a searchlight.

While the command investigation found that leadership behind the mission had violated Army regulations on the use of medical helicopters for a non-medical purpose, the Army Inspector General and the Defense Department Inspector General reviewed the investigation and determined they were authorized to use the helicopters because it was an emergency situation, according to the Army officials.

“We’ve also found that the decisions to use those helicopters in the civil disturbance operation was reasonable because of that emergency situation,” said one of the Army officials. “But the bottom line is these pilots and these leaders reacted to the situation based off the emergency nature that was there.”

Army regulation 95-1 “Flight Regulations” states that requests for using medical helicopters for missions outside medical or humanitarian missions, such as emergencies, have to go to the Army’s deputy chief of staff for operations at the Pentagon, Lt. Gen. Charles Flynn.

The command investigation found that no request for an exception was submitted. It is unclear how the Inspector General report determined that the emergency situation overruled the need for the request.

The Army officials Wednesday stated that the Army, not just the D.C. National Guard, has instituted changes based on lessons learned from the incident, including more scrutiny of aircrafts used in support of local agencies in the District of Columbia and a more formal approval process for missions in the capital region.