GAO: Army Reserve, Guard don’t know how many soldiers are fit to fight 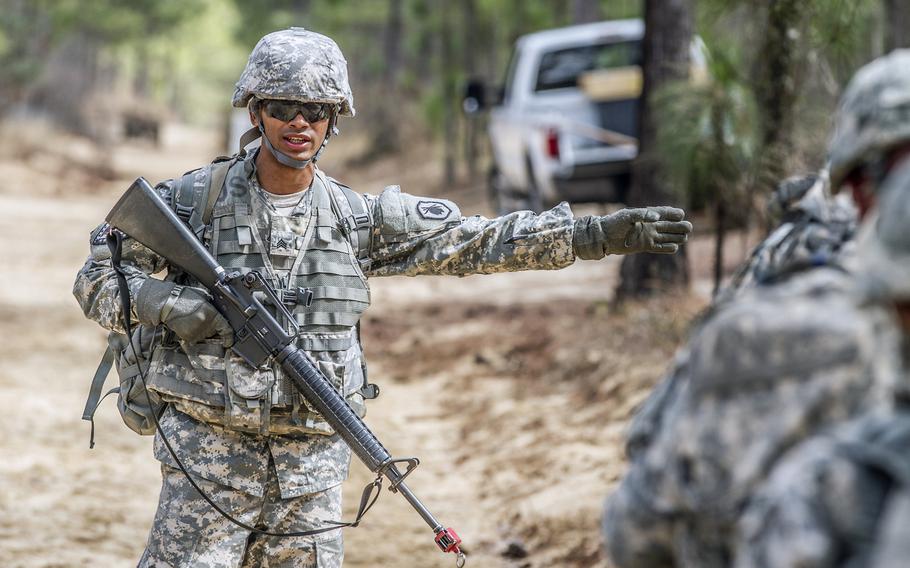 Army Reserve drill sergeant candidate Sgt. David Perez, 98th Infantry Division, directs his squad during a situational training exercise at the U.S. Army Drill Sergeant Academy at Fort Jackson, S.C., March 4, 2015. The Government Accountability Office concluded in a report published July 31 that the Army Reserve and Army National Guard do not have a good handle on how many of their soldiers are fit to fight. Brian Hamilton/U.S. Army (Brian Hamilton/U.S. Army)

KAISERSLAUTERN, Germany — The Army Reserve and Army National Guard can’t properly determine how many of their soldiers are fit to fight, sometimes listing jailed soldiers as available to conduct missions, the Government Accountability Office says in a recent report.

The nonpartisan GAO also determined that hundreds of soldiers who were reported as ready to to serve were actually ineligible to mobilize and deploy under Army guidance.

The inconsistencies suggest the components’ overall nonavailability rates as of January — 22 percent in the Reserve and 21 percent in the National Guard — could be even higher.

The audit highlights the problem at a time when both the Army and Reserve components are drawing down, making accurate tracking of soldier availability even more critical, the GAO said.

“Without quality data that is readily available to leaders at all levels … the Army and its Reserve component leaders will not be able to adequately monitor and manage the availability of soldiers who make up over half of the total Army force,” the GAO said.

The data for more than 3,800 soldiers — from both categories — was found to be incomplete, inaccurate or inconsistent, making it unreliable.

More than 750 soldiers were inaccurately reported as available. Of this number, more than 600 were currently mobilized or deployed; about 100 were younger than 18 years of age; about 30 had medically limiting conditions; more than a dozen had health information missing for more than five years; and about 10 were currently incarcerated.

GAO auditors also found 350 cases of soldiers with questionable or incomplete statuses. About 280 individuals, for example, had not been present at drill for at least the last six months but were listed as available.

One reason for the inconsistencies, the GAO found, was that several data systems don’t interface.

Senior Reserve and National Guard unit officials attributed some problems to soldier self-reporting. Some soldiers, for example, may not report or may understate a chronic health condition, they said.

The National Guard suggested that a lack of training for personnel clerks, staffing shortages and budget constraints may also contribute to some of the data inaccuracies.