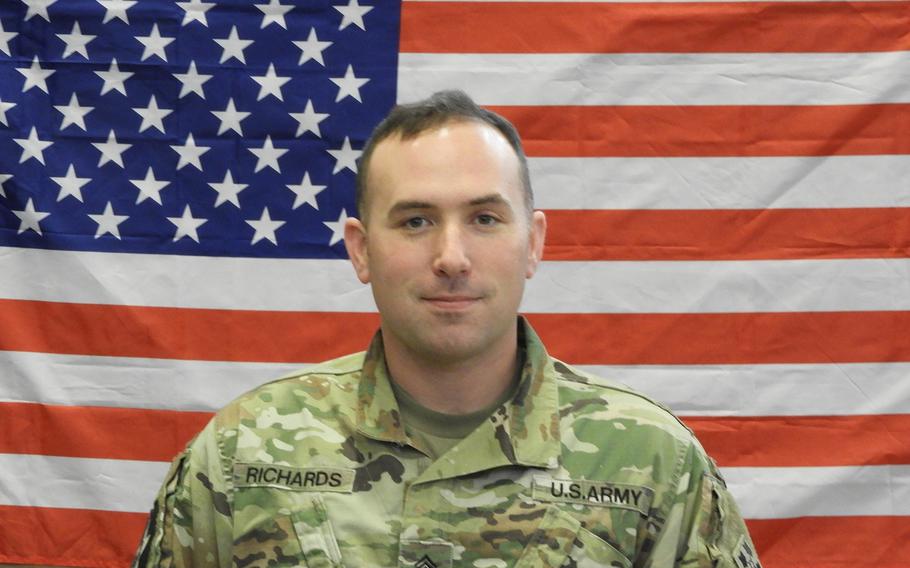 WASHINGTON — A Colorado-based soldier who had served in Iraq and Afghanistan died Wednesday while testing to earn the Army’s Expert Field Medic Badge in South Korea, Army officials said Thursday.

Staff Sgt. Kelly L. Richards, 32, died during the training at Camp Casey, where he had been sent temporarily to participate in the EFMB testing while his unit was deployed to Kuwait, according to the Army. Officials said his death was under investigation and declined to provide details about the incident.

Richards of Grayling, Mich., was a medic assigned to the Fort Carson-based 3rd Armored Brigade Combat Team, 4th Infantry Division. He enlisted in the Army in June 2005, and he had deployed to Iraq, Afghanistan, Romania and more recently to Kuwait. He was assigned to Fort Carson in September 2016.

His brigade deployed in the spring to Kuwait to support Operation Spartan Shield, a mission that rotates forces through the Middle East to train with allies and deter enemy aggression. Richards was sent in recent weeks on temporary duty to Camp Casey to test for the EFMB, a badge coveted by medics because it identifies them as experts at their job.

EFMB testing at Camp Casey began last week, according to the Army. The grueling weeklong course includes a physical fitness test, a land navigation course and a series of events designed to test soldiers’ weapons and battlefield medicine proficiency.

Richards was expected to return to his unit in Kuwait upon completion of the EFMB test, the Army said.

Col. Grant S. Fawcett, the commander of 3rd Brigade, 4th ID, described Richards as dedicated to his nation and his unit.

“The loss of this exceptional [noncommissioned officer] and leader will be felt by soldiers throughout the Iron Brigade," Fawcett said in a statement that expressed condolences to Richards’ family and friends.