Fights between two Army captains at strip club, apartment led to the death of one, a murder charge for the other 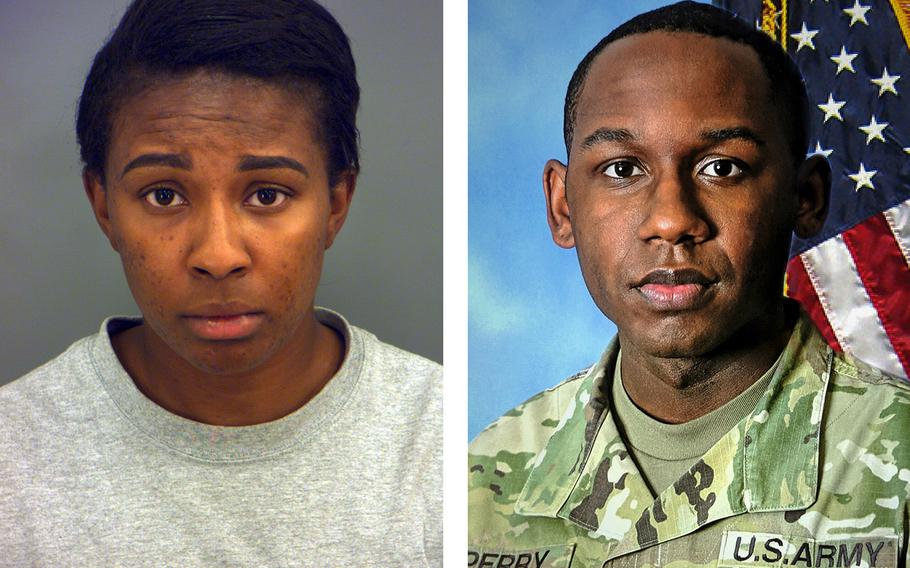 AUSTIN, Texas — Anger over frequent strip club visits ignited a night of fights, violent threats and car chases for two romantically involved Army captains assigned to Fort Bliss that ended with one dead in a fiery crash and the other charged with murder, a court document reveals.

A night of jealousy and violence Oct. 11 saw Capt. Clevy Muchette Nelson-Royster, 27, and a civilian man chase down her on-again, off-again boyfriend, Capt. Malcom X. Perry, and ram his car with her vehicle until his car flipped and burst into flames, according to an arrest affidavit filed with the El Paso County District Attorney’s Office.

Perry, 27, was burned alive in his car, authorities said.

Eyewitnesses and video surveillance footage show Nelson-Royster and Sennessie were at a bar called 915 Vibes, where she got into a fight with a group of women and was kicked out. From there, the two went to Jaguars, a strip club that Perry was known to frequent, “and this has caused a strain on their relationship,” according to the court document.

Inside the strip club, Nelson-Royster confronted Perry and broke his eyeglasses, which triggered a fight with Perry that also involved a stripper. Surveillance footage shows Nelson-Royster fighting with other club employees before being physically removed from the club. Outside the club, she was heard shouting that when someone she knew got back from Afghanistan, she would have him shoot Perry, according to the court document.

Nelson-Royster and Sennessie then got into her Jeep Wrangler and, after gathering three other people for support, went to Perry’s apartment complex, where they used the Jeep to ram a security gate to get inside and confronted him.

The group found Perry sitting in his car, an Audi A4 sedan. Nelson-Royster “proceeded to assault [Perry], by punching him several times. [Perry] managed to get away and drove off in his vehicle,” according to the court document.

Nelson-Royster told police that she then got back into the passenger side of her Jeep with Sennessie and they began following Perry and intentionally rammed his car. She “conspired, orchestrated and committed” the events of the night, according to the court document. She “kept yelling at Sennessie to ram into [Perry’s] vehicle, evidencing her intent to commit an aggravated assault.”

Sennessie told police that Nelson-Royster kept grabbing the wheel and blowing the horn and that she was not concerned about damage to her own vehicle.

During the chase, Perry called 911.

“They are hitting my car. They’re bumping my car,” Perry said, according to the court document. “I am going to die.”

“Moments later there was a loud crash sound and the victim could be heard yelling for help,” according to the document. Sennessie fled the scene, but Nelson-Royster was still in the Jeep when police arrived and was taken into custody.

Nelson-Royster and Sennessie remain in the El Paso County Detention Facility with bonds set at $500,000 and $1 million, respectively.