Chaplain with PTSD returns; shows troops there’s a way out of darkness 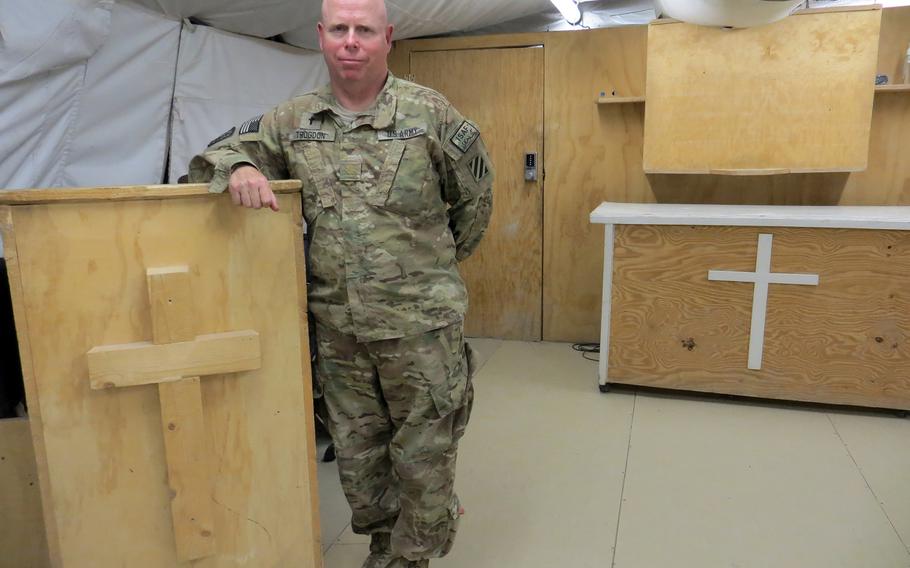 Buy Photo
Maj. David Trogdon, chaplain of the 3rd Infantry Division's 4th Brigade Combat Team stationed in Afghanistan's Logar province, suffers from PTSD. "If I can help reduce the stigma, then it's worth me talking about it," he said. (Martin Kuz/Stars and Stripes)

PADKHVAB-E-SHANEH, Afghanistan — The soldier lay on a stretcher, his lower legs a mash of pulverized bone and blackened flesh. Under the bright lights of the medical tent, doctors and technicians ringed his broken body.

Maj. David Trogdon stood back a few feet, watching in silence. When he saw an opening, the chaplain came forward and squeezed the soldier’s hand in his own.

Alert and lucid, the soldier spoke in a low voice punctuated by sharp breaths. He had stepped on an improvised explosive device while on patrol with his platoon. He realized the severity of his condition and requested a prayer. Trogdon, head bowed, implored God to relieve the young man’s suffering and grant him strength in his recovery.

A short time later, the soldier flew from Forward Operating Base Shank in Logar province to Bagram Air Field, and from there he traveled to Germany and the United States. He lost both legs below the knee.

“It’s almost like having my kid in there,” said Trogdon, chaplain of the 3rd Infantry Division’s 4th Brigade Combat Team stationed at FOB Shank. “Afterward, you have to take a breath and think, ‘OK, what just happened?’ ”

Trogdon suffers from post-traumatic stress disorder. He ministers to most of the casualties who pass through the base’s medical clinic before pivoting to a task he considers as vital as comforting the physically wounded: providing solace to those who must continue fighting when injury or death steals a comrade.

Members of the soldier’s platoon had gathered at the clinic on that June afternoon. Trogdon met with them after the medevac helicopter lifted off. Fury mixed with grief. He urged the men to open up to each other in the coming days.

“I tell our soldiers all the time that the combat stress is there, it’s in them and it’s going to come out one way or another,” said Trogdon, 52, of Camden, N.J. “The best way to get it out is by talking to someone, especially their buddies.”

He knows from experience the corrosive effect of repressing anger and anxiety. His return to war this year after three tours is motivated, in part, by a desire to show fellow troops that mental trauma can be tamed.

“Sometimes I get asked, ‘Does it bother you that people know you have PTSD?’ And I say, ‘No, I earned it,’ ” he said. “If I can help somebody else and help reduce the stigma, then it’s worth me talking about it.”

In 2008, early in a 15-month tour in Iraq, Trogdon suffered a traumatic brain injury when a mortar exploded within 30 feet of his office at Camp Victory in Baghdad’s Green Zone. Stalked by headaches and groping for scraps of sleep, he finished out the deployment, rotating among more than 30 bases to minister to soldiers.

The symptoms of his TBI persisted after he returned home, even as he popped Excedrin Migraine pills like Skittles. The physical pain was compounded by a creeping sense of alienation from family and congregants. Yet amid a fraying marriage and sporadic bouts of compassion fatigue, he felt too ashamed to reveal his struggle.

“I kept thinking, ‘I’m a chaplain, I’m not supposed to go through this. What’s wrong with me?’ ” Trogdon said. He was seized by self-loathing, and by early last year, his psyche had fractured.

“I actually wanted to die,” he said. “I wasn’t going to kill myself. But there were times when I would lay down at night, close my eyes and pray, ‘God, take me. I don’t deserve to live.’ ”

Military doctors had prescribed medications that failed to ease his headaches. The drugs fogged his mind; he often stopped talking mid-sentence, unable to remember his line of thought. He found himself on the brink of a medical discharge until a visit last spring with a neuropsychologist at his unit’s base in Fort Stewart, Ga.

The clinician concluded that, while his traumatic brain injury had mostly healed, he was plagued by PTSD and depression. The dual diagnosis reflected the psychological fallout from presiding over more than 400 memorial services and funerals, and from the rigors of deployment.

He has commiserated with the families of soldiers who committed suicide and young couples who lost newborns. During a tour in Iraq in 2003, he witnessed the carnage of the U.S. military’s “shock and awe” bombing campaign and ensuing ground invasion. “I saw more death than I’d ever imagine I’d see,” he said.

Reviewing Trogdon’s career history, another psychologist told him, “On a trauma scale of one to 10, you’re a thousand.”

Though the causes were apparent to behavioral health providers, he greeted the diagnosis with disbelief.

“TBI — at least that’s a battle injury,” he said. “Now they’re telling me I’m depressed and I got PTSD? An emotional injury?” He offered a similar rationale for initially refusing a Purple Heart for the mortar attack in 2008. “Why should I be honored when there are guys who have been killed, guys who have been seriously wounded physically?”

‘God is using me’

Trogdon has emerged from his inner darkness in the past year, aided by counseling and an antidepressant he calls “my crazy pill.” He repaired his marriage and rediscovered purpose in his ministry. The experience has changed his perspective on post-traumatic stress, a malady he now recognizes as legitimate, debilitating and, within the military, disturbingly common.

“I talk to so many soldiers who deal with PTSD-type symptoms and TBI that haven’t gotten help,” said Trogdon, who accepted the Purple Heart last summer for his brain injury. He notices a particular reluctance among low-ranking soldiers, who fear appearing vulnerable to superiors.

“Many times, for one reason or another, soldiers think that what they’re feeling is wrong,” he said. “So I tell my story and sometimes they feel better, because if the brigade chaplain has PTSD, then it must be OK for a private or specialist to have it.”

Trogdon understood before starting his fourth tour that he would absorb more anguish. His unit deployed to Afghanistan in February and patrols Logar and Wardak provinces, immediately south of the capital of Kabul, an area that remains riven with violence after more than 11 years of war.

A handful of the brigade's soldiers have been killed and dozens maimed by bullets, mortars and IEDs. Attending to casualties in the medical clinic is a self-imposed duty that can inflame his PTSD, causing him to briefly withdraw and rupturing his sleep. Enduring the symptoms is the cost of fulfillment.

“As a chaplain, the greatest satisfaction is knowing that God is using me to help someone through the worst day of their life,” said Trogdon, who with his wife, Connie, has two children and four grandchildren. “I want to be here for the guy who was wounded. I want to be here for his buddies.”

He draws on his awareness of mental trauma when consoling soldiers distraught by a friend’s death or injury, reassuring them that rage and despair are natural reactions to war’s disorder. The conversations are confidential, a guarantee of privacy that allows for candor. He avoids pushing faith or psychology.

“Eighty percent of what I do is listen,” he said, sitting in his small office, its plywood walls decorated with photos of his grandkids. “That 19-year-old or 20-year-old private doesn’t really understand all this ‘psycho stuff,’ anyway, or even the spiritual importance of talking. What matters is that they’re getting something out that’s bothering them.”

He recalled meeting with a soldier who had seen members of his platoon badly wounded when their armored vehicle struck an IED. The specialist, in tears, divulged that he was suffering from flashbacks, lack of sleep and loss of appetite.

“If something like that happened and you could just go on like it was nothing, you would be crazy,” Trogdon said. “I got news for you: You’re normal.”