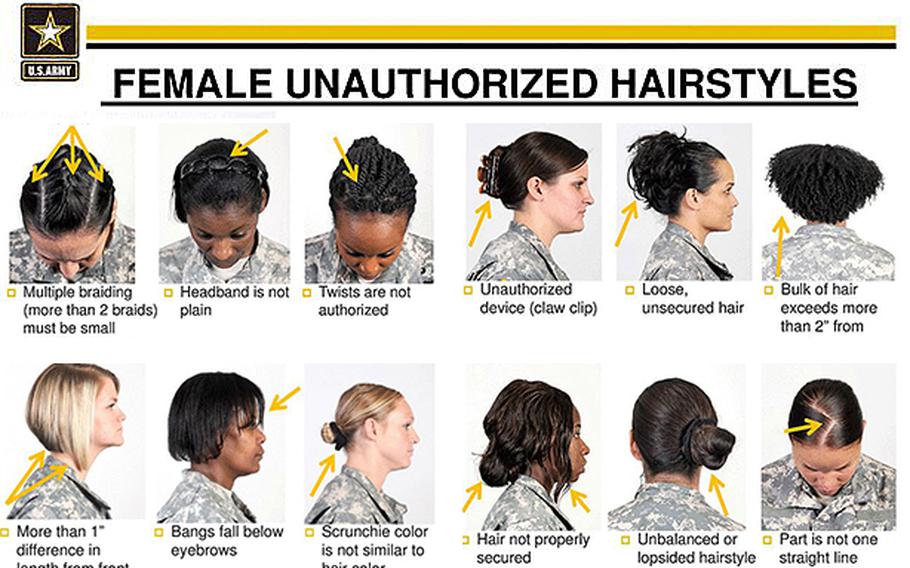 In a letter to Hagel on Thursday deriding the new rules, the 16 members of the Congressional Black Caucus also called the use of words such as “unkempt” and “matted” when referring to hairstyles traditionally worn by black women as “offensive and biased.”

“Though we understand the intent of the updated regulation is to ensure uniformity in our military, it is seen as discriminatory rules targeting soldiers who are women of color with little regard to what is needed to maintain their natural hair,” wrote the group, which is chaired by Rep. Marcia L. Fudge, D-Ohio.

Pentagon officials said the Defense Department had received the letter and would respond promptly. Army officials meanwhile said restrictions on dreadlocks and twisted hair were not new, but carried over from the previous 2005 regulation.

Development of the revised policy was done carefully over three years and was based on broad input, Army spokeswoman Lt. Col. Alayne Conway said in an emailed statement.

“African American female Soldiers were involved in the process of developing the new female hair standards,” she wrote. “Not only were nearly 200 senior female leaders and soldiers (which included a representative sample of the Army’s populations) part of the decision-making process on the female hair standards, but the group was also led by an African American female.”

The last major revision of the Army’s uniform regulation provided broad guidance, but largely left it to leaders to judge which hairstyles were acceptable. Released in 2005, it dedicated fewer than 500 words to women’s hair and noted that “It is not possible to address every acceptable hairstyle, or what constitutes eccentric or conservative grooming.”

By contrast, the Army’s new rules dedicate more than 1,300 words to women’s hair, many of them very specific. However, not all of the provisions now under fire are really new or even unique to the Army.

Most of the “new” hair rules in the Army regulation appear to have been cribbed directly from rules enacted by the Marines in 2007.

And since 2005, the Army has explicitly prohibited the wear of dreadlocks, described as “unkempt, twisted, matted individual parts of hair.” Twists, which the policy defines as “two distinct strands of hair around one another to create a twisted ropelike appearance” are likewise banned.

Conway added that soldiers who want the policy modified can submit written suggestions to the office of the Army G-1 (the Deputy Chief of Staff in charge of personnel policy) through their chains of command.