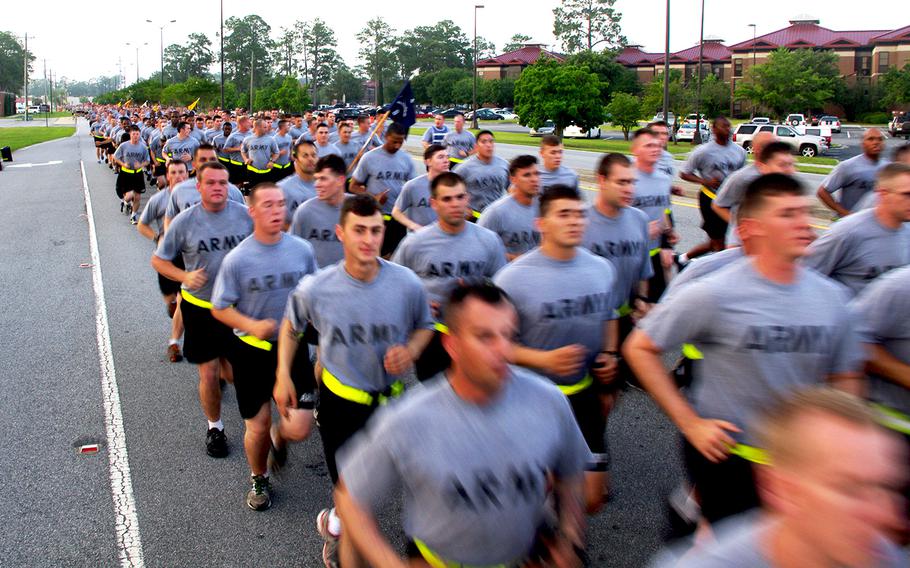 Soldiers can stash their reflective belts during workouts from dawn to dusk, the Army said in a memorandum issued earlier this month.

On Jan. 4, Army Secretary Mark Esper signed the directive that is part of a series of memos Esper and Army Chief of Staff Gen. Mark A. Milley have issued since April 2018 that modify or eliminate training requirements to “improve warfighting readiness and lethality.”

The latest memorandum also does away with centralized records collection of command-directed training and amends inventory processes for stocks of Army equipment pre-positioned around the world for rapid deployment.

Previous memos have eliminated a host of Department of the Army headquarters-level requirements, which some soldiers have complained were too onerous or took too much time away from their efforts to conduct training, maintenance or operations.

For example, last year, Esper did away with the required use of the Travel Risk Planning System, or TRiPS, which often was required for leave requests. It also eliminated required training in trafficking in persons, accident avoidance, media awareness and HIV awareness, among several other topics.

This month’s memo, the first of 2019 in the series, amends the Army safety program policy to state that the service “does not require the wear of the reflective training belt or vest during daylight hours, or while conducting physical training on closed roads or dedicated physical training routes.”

The change seems to highlight the glaringly obvious — that a belt worn to increase a soldier’s visibility to drivers of cars and other vehicles on predawn or nighttime runs would not normally be needed in broad daylight or where vehicles generally can’t go.

But some servicemembers have complained that a culture of excessive safety-consciousness led to the requiring of the belts in less useful contexts or indiscriminately.

Dubbed “PT belts” or “glow belts” by soldiers and officially known as “Belt, High Visibility” in Army nomenclature, they’ve been a subject of much derision among soldiers and troops of services that require them in various training situations.

Widespread mockery of the strips of bright, reflective nylon includes invented lore about their supposed magical or secret powers.

In May, Gen. Robert B. Abrams, then-commander of the Army’s largest organization, U.S. Army’s Forces Command, said on Twitter that the service had “lost our collective minds” about when and where the belts are required.

The memo also eliminates any requirement to record training in the Army’s Digital Training Management System if the training is directed by commanders at echelons below the Army’s headquarters.

Also, in an attempt to simplify the 100 percent accountability of Army pre-positioned stocks, the memo says an “inventory by exception” process now will be allowed. That generally would require officials to do physical counts only of items that aren’t otherwise “touched” during routine actions in a given inventory period, such as move orders, maintenance, calibration checks, usage logs or flight logs.

As news of the PT belt policy change began to circulate online, soldier reactions ranged from joy to disbelief—much of it expressed predictably through sarcasm or with healthy levels of irony.