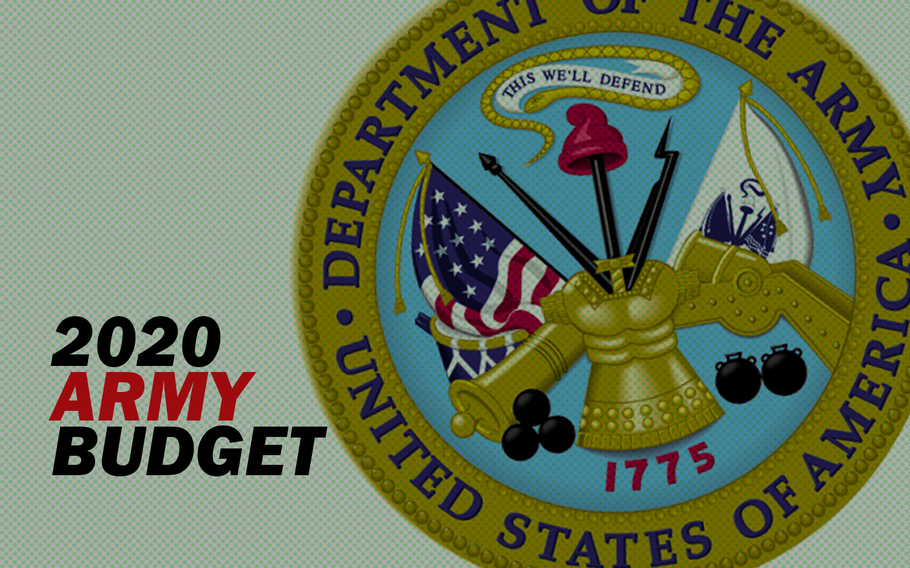 The Army is requesting $191 billion for its fiscal year 2020 budget, with plans to modernize its weapons while also reducing its active force. ()

The Army wants $191 billion for its fiscal year 2020 budget, which calls for big investments in new weapons systems to counter adversaries such as Russia and China while also slightly reducing the number of soldiers sought for the active force.

The Army’s request, released by the Pentagon on Tuesday, roughly equals what the service asked for one year ago. But this year’s plan puts greater emphasis upgrading its arsenal for future conflicts with more funding to develop a next generation combat vehicle, helicopters and ground-based missile systems.

The Army’s proposed budget would have matched 2019’s request except for a new $9.2 billion addition in emergency funds, a portion of which could be tapped in connection with President Donald Trump’s efforts to build a wall along the U.S.-Mexico border.

“We do need to grow,” Under Secretary of the Army Ryan McCarthy told reporters. But a strong job market in the United States has complicated the efforts and resulted in a more modest growth plan, he said.

Meanwhile, boosting the readiness of the force remains a top priority with the Army on track to reach its goal of having all brigades combat ready by 2022, military officials said.

“We will need to continue this level of funding to achieve those readiness goals,” Lt. Gen. Thomas Horlander, an Army deputy for budget issues, told reporters.

In the 2020 proposal, the Army also calls for major war games overseas, including the inaugural division level “Europe Defender 20” and Pacific Pathways.

The Army base budget adds up to $150.7 billion while calling for another $31.6 billion to support overseas contingency operations such as the war in Afghanistan and the deterrent mission to counter Russia in Europe.

The budget calls for a $1 billion increase in research and development, bringing that account to $12.2 billion to help the service modernize in six key areas. The top priority is developing long-range precision fires. After that, the Army said it needs a next-generation combat vehicle to replace the Bradley as well as new airlift capabilities, air-and-missile defense weaponry, gear to enhance soldier lethality and an improved communication network.

Research and development highlights include $378 million for a next-generation combat vehicle, $427 million for a future attack reconnaissance helicopter and $428 million for “Lower Tier Air Missile Defense” to give ground forces a wider range of options.

The research budget also calls for upgrades to ground combat vehicles such as the Stryker, Abrams and Paladin.

The Army described itself at a “strategic inflection point requiring a shift from irregular warfare to large-scale ground combat operations,” the budget request states. The Army’s aim is to begin fielding the new weapons systems by 2028.

While the Army is investing on developing new systems, the service plans to start phasing out older legacy programs. In preparation for the 2020 budget, Army leaders said they found $31 billion that can be saved by eliminating various programs in the years ahead that don’t fit into its future force plan. That required "tough choices," McCarthy said.

The savings will be realized over time rather than all at once. However, on the procurement side, there is reduced demand for the Bradley combat vehicle, which is expected to be gradually phased out if efforts to develop a next-generation vehicle prove successful.