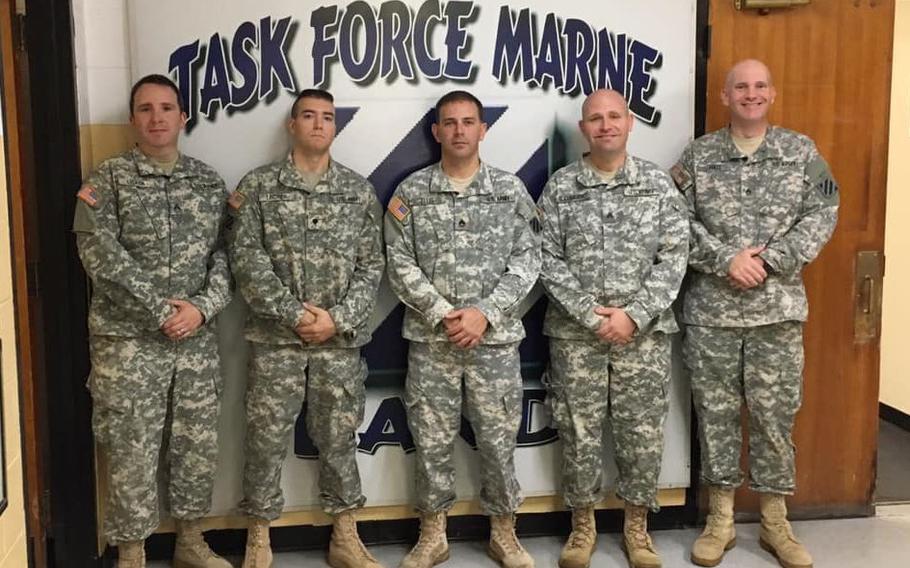 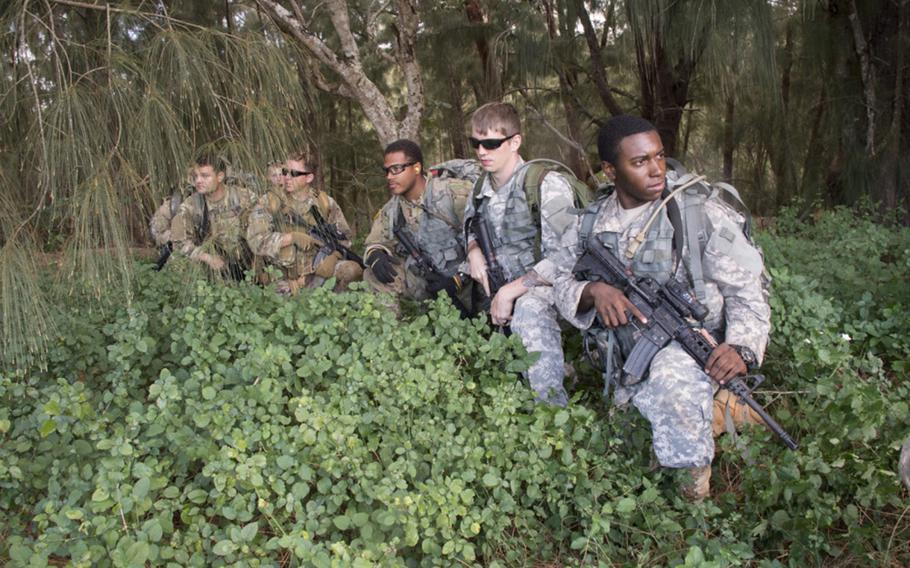 Two soldiers on the right wear the green-blue-gray Universal Camouflage Pattern during an exercise in Hawaii in 2017. (Cynthia De Leon/U.S. Navy)

The Army’s wear-out date for UCP-schemed combat uniforms came Monday after a yearslong transition period designed to allow soldiers to shift slowly to the brown-and-green Operational Camouflage Pattern that the service chose in 2014 as its standard pattern. As of Tuesday, soldiers must wear the OCP uniform.

In reality, the UCP design — originally meant for urban, desert and wooded battlefields but ultimately scorned as virtually useless in most environments — had largely disappeared in recent years from major Army posts and within the halls of the Pentagon as the OCP design proved more popular and more effective in the field. Last year, the Air Force announced it would also adopt the Operational Camouflage Pattern as its standard combat uniform.

The deadline for soldiers to switch camouflage seemed to pass largely unnoticed at the Pentagon where several soldiers said they had not realized the UCP had still been authorized through Monday. Others said they were aware of the Monday deadline but they had long ago retired their UCP gear.

Some soldiers celebrated. Five members of the 3rd Infantry Division’s band dusted off their UCP duds to pose together in them one final time for a photo for their unit’s Facebook page.

Ultimately, the Universal Camouflage Pattern, chosen by Army brass in 2004 following an extensive camouflage study, was probably best fit for band members or other soldiers who rarely ventured into combat zones.

The pattern was supposed to be useful in multiple combat situations from the mountains of east Afghanistan to the deserts and cities across Iraq, where soldiers had previously been issued separate woodland and desert camouflage pattern uniforms. Army leaders later conceded the pattern had not been properly tested, even as the service spent some $5 billion to develop its unique camouflage.

In 2010, fearing soldiers in UCP gear could be easily spotted by enemy fighters on the battlefield, the Army began issuing a different camouflage pattern made up of darker shades of green and brown known as MultiCam to soldiers deploying to Afghanistan. The Operational Camouflage Pattern eventually selected as the UCP's successor is a variant of MultiCam, which is owned by private company Crye Precision.

Army officials said MultiCam would have proved too expensive for the entire force. The Army owns the licensing rights to the OCP design, which has performed well in extensive studies. It has become the standard uniform for soldiers operating across the globe.

The end of the UCP design uniform for the Army came as the Navy on Monday phased out its equally maligned blue-gray Type I Navy Working Uniform, better known as “blueberries.”

On Facebook, commenters lambasted the Army's old pattern and questioned the decision of service leaders to adopt it in the first place.

“The only thing that the [UCP] camo pattern on the [Army Combat Uniform] ever blended with was gravel,” one commenter wrote Monday on the Army’s 10th Mountain Division’s Facebook page.

Added another, bluntly: “Worst pattern ever.”