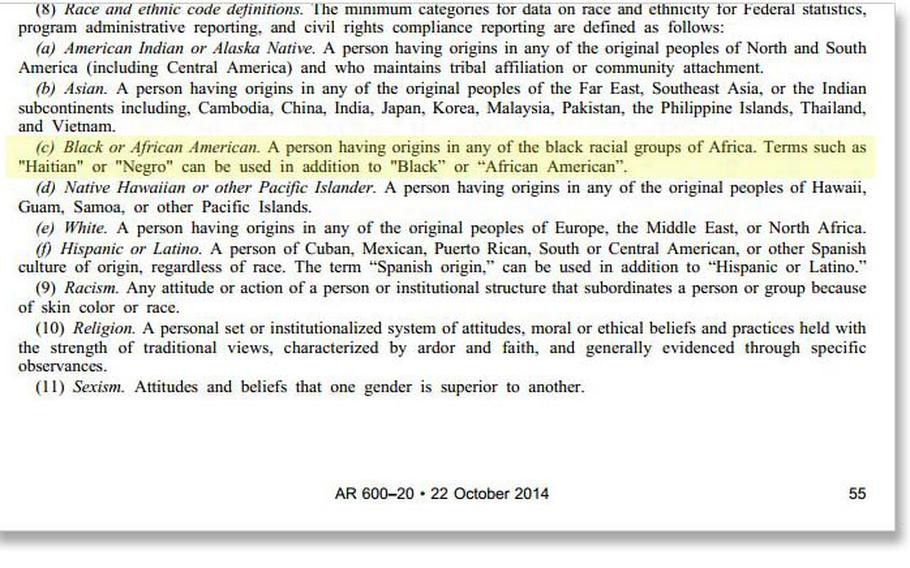 Army regulations published in October allow a black or African-American servicemember to be categorized with the term “Negro” or “Haitian.”

The passage, found in the "Army Command Policy," known as regulation AR 600-20 [PDF], is in a section detailing the Army’s equal opportunity program.

The Army was uncertain when the term was added to the regulations, according to CNN, which first reported its inclusion.

Negro was commonly used to refer to African-Americans through the 1960s until it fell out of favor in the wake of the civil rights movement of the era.

The U.S. Census Bureau announced last year that it would no longer use the term Negro on its forms as of 2014. The term had been in continuous use since the census of 1900.

The Department of Defense collects extensive demographic data on the makeup of the military force for issues such as equal opportunity and ensuring discrimination does not take place.

CNN reported that an Army official familiar with the document said it is possible the word was added so that when soldiers self-report on forms, they would have an opportunity to identify themselves as Negro, if they so chose.

A military officer specializing in personnel issues for the Defense Department, however, called that “the dumbest thing I have ever heard,” noting the Pentagon does not use the word in any of its extensive collection of demographic data, CNN reported.

Lt. Col. S. Justin Platt, an Army spokesman, told CNN that the use of the word comes from an outdated section.

“The racial definitions in AR600-20 para. 6-2 are outdated, currently under review, and will be updated shortly,” he said. “The Army takes pride in sustaining a culture where all personnel are treated with dignity and respect and not discriminated against based on race, color, religion, gender and national origin.”